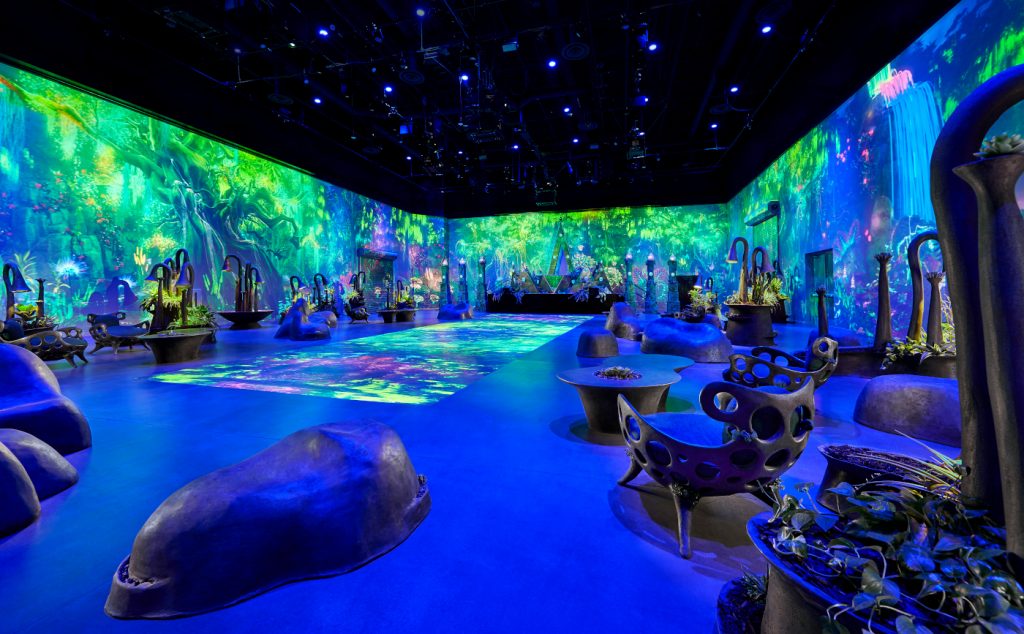 The portal at AREA15.

The year is 1993. You’re in the thick of the Rio Hotel and Casino in Las Vegas NV, paying attention to nothing less than the little ball dancing in the wheel of your roulette table, and maybe your glass that—just like your wallet—was full a few minutes ago. And then…the show begins. Colorfully decorated floats with dancers, musicians, and all manner of frills and frolic float by overhead. The music comes from everywhere—from the floats themselves, from musicians playing their part and, yes, from the walls. The entire building supports this experience, transforming the casino into a show. How long does it last? You won’t remember. Maybe 10 minutes? And then, it’s back to the wheel. Wow! You’re ready for some more of whatever it is that they’re serving….

The ’90s and into the first decade of the 21st century, in particular, put the “mm…” in “immersive experience.” The Fremont Street Experience in Las Vegas is a pedestrian mall and barrel-vault canopy that covers four city blocks. This canopy incorporates huge overhead light screens that run up and down the structures—90 feet high at the peak. Multiple loudspeaker positions are incorporated, as well. Both video and audio activate the entire canopy to deliver regular shows with content that changes with the season. This helped the historic downtown to rise again, bringing new audiences to the area. The shows were actually shortened from their initial duration because they were so captivating that casino traffic slowed down too much!

Resident shows like Cirque du Soleil’s “Mystère,” “KÀ,” “O” and The Beatles’ “LOVE” created a completely new genre: the spectacle show. Las Vegas made it a point to create an attraction out of virtually any experience. System and sound designers, including Jonathan Deans (Cirque, Rio) and Alan Howarth (Fremont Street) helped these experiences push the envelope for what audiences would come to expect. Las Vegas became a family destination. Crowds became the norm. And we liked it that way. The more, the merrier!

And, yet, here we are. More than a year ago, March 11, 2020, the National Basketball Association (NBA) shuttered its season; we, meanwhile, collectively shuddered. Then venues around the world closed. Invitations to “virtual” events, performances and meetings flooded our inboxes. (A brief digression: Must we call them “virtual”? Are they really unreal? Or just a different kind of real?) Many venues pivoted to online offerings to serve artists, connect to their audiences and even grow their audiences. 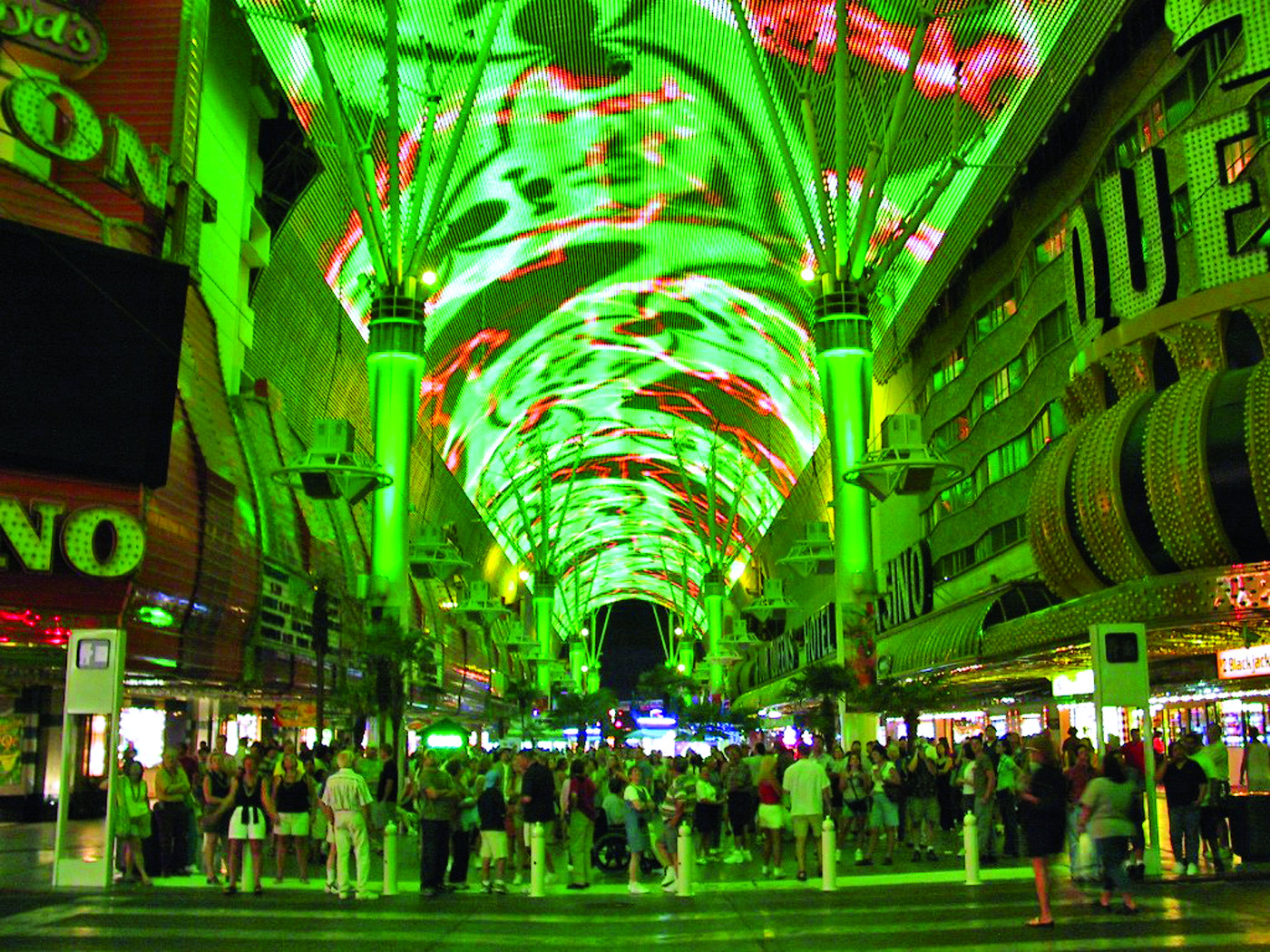 National Sawdust, in Brooklyn NY, is a flexible music venue that can accommodate audiences of up to 150 seated or 250 standing, and it’s packed with spatial-audio technology. It regularly uses spatial sound and electronically adjustable acoustics to enrich its events, which run the gamut from pop, to classical, to experimental, to everything in between. The venue often features new works created by up-and-coming composers. National Sawdust developed a rich program of online content through its Digital Discovery Festival, which is now ongoing. Still, it seems that, sometimes, we can only dream of being in venues where our experience is elevated by sharing it with others—often, others in very close proximity (certainly within six feet). In many (most?) areas, theaters and shows remain closed even now.

And, yet, just like the wildflowers that invariably spring from the smallest cracks in the pavement, experiences are starting to blossom. They might be scaled down, maybe experienced in a different way, but they’re emerging nonetheless. And spatial audio is playing a part in elevating these experiences.

Las Vegas’ AREA15 Immersive Entertainment and Events Complex recently opened, and it’s using both a multichannel overhead system and ground-mounted line arrays to deliver immersive audio content, working with musicians such as Max Cooper. In the same complex, Meow Wolf’s Omega Mart also recently opened. The Los Angeles Times noted that its goal is to “marry experimental art, theme-park-inspired design and ambitious ideas on how we play in physical spaces.” And, “as evidenced by Omega Mart selling out its opening weekend, many are ready for a place that feels like a return to normalcy.” Art museums are all about immersive experiences.

Last year, visual artist Casey Reas and Mouse on Mars’ Jan Werner collaborated to premiere “Compressed Cinema” via an online exhibit presented by the Walker Art Center in Minneapolis MN. Earlier this year, they physically mounted this work as “Alchemical” at bitforms gallery in New York NY. The work includes video sections that change between a pair of large projections set at an oblique angle. They expanded their original stereo concept to a multichannel installation that provided overlapping quad configurations, supported by a subwoofer. The event was well attended, and it extended beyond its originally scheduled showing.

Recently, I attended a free public music and video event that featured the music of Brian and Roger Eno and their new album, “Mixing Colours.” Two large video screens showed films that accompany each piece, and the music was played from a pair of ground-mounted line arrays. A colorfully lit fountain bubbled away in the center of the plaza. The music was calm and impressionistic, punctuated by simple piano lines. National Public Radio (NPR) noted, “Some of them feel like they wandered in from a less hectic century.” Rachel S. Moore, President and CEO of The Music Center, said, “As the world comes to terms with our common experience of isolation and self-reflection over the last year, arts experiences are a healing and unifying remedy.” The evening that I attended, there were no other viewers. Perhaps the chilly winds of that particular February evening kept them away.

This reminded me of the potential for pop-up attractions, and, in particular, for outdoor pop-up attractions. What if this installation incorporated loudspeakers that surrounded the plaza? In this particular case, the video screens were fixed in the front, and the area was quite large. So, perhaps, a multichannel installation would not translate as well. On the other hand, though, the individual loudspeaker clusters in a distributed concept wouldn’t have to be as large, and the audio might draw people into the plaza. The work could be experienced sonically in different ways by exploring various listening positions in relation to other local architecture, both physical and sonic. This would also provide the opportunity to encourage musicians to create special, site-specific spatial mixes, or stemmed-out masters, similar to what Cooper did recently in AREA15.

Multichannel audio design for Las Vegas experiences like Masquerade in the Sky, Cirque du Soleil shows, the Fremont Street Experience and others came from a time of audacious experimentation. It felt like every next show had to be bigger and better than the previous one. How can we tap into that spirit now when we design new facilities?

There are a few considerations that, when followed, can help lay the groundwork to elevate an ordinary installation and transform it into a truly extraordinary immersive experience. What follows are a few design considerations we can glean from this golden age of Las Vegas entertainment technology.

If you follow the tips provided in this article, there’s nothing stopping your atrium, museum or mall project from being transformed into a spatial-audio extravaganza.