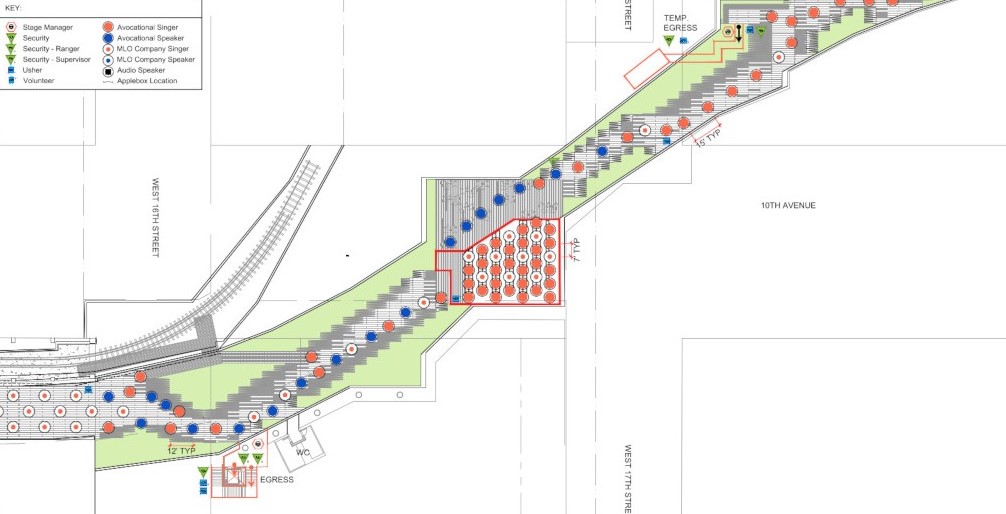 A high-level, partial overview of "The Mile-Long Opera: a biography of 7 o'clock" in New York's High Line Park

How do we experience sound in space? We can gain valuable new perspectives from the world of contemporary arts.

Entering the basement of the 356 Mission art gallery in Los Angeles CA, presenting Jacqueline Gordon’s “Not Exactly B-Flat,” you encounter a maze of inflatable walls and the incessant drone of electric air pumps. While walking in this maze, the drone stops and the walls slowly begin to deflate. Individual voices are heard through the nine loudspeakers placed within the sculpture. As the walls collapse, those voices become a group, revealed through this change of architecture. Then, the voices begin to move within the space, liberated by the vanishing walls.

In New York NY’s High Line Park, you walk along a 1.5-mile linear path built on an old rail bed, hearing singers, both individuals and in groups—1,500 in all—performing “The Mile-Long Opera: a biography of 7 o’clock.” Composed by David Lang with libretto by Anne Carson and Claudia Rankine, this collective choral work is based on interviews with residents throughout the city, asking New Yorkers what 7pm means to them. Most of the vocalists are singing without sound reinforcement, and your acoustic “mix” changes as you walk by them along the park.

However, toward the end of the piece, the last 25 solo singers are reinforced with loudspeakers at their feet that point both up and down the path. This is primarily necessary due to the increased ambient noise level. But the microphones used for local reinforcement also provide a basis for sound designer Jody Elff to create a reverberant cloud that reveals the chord being sung using a group of six loudspeakers at the end of the path. Sonic elements are experienced individually, or a pair at a time during transitions, and finally coalesce to provide an ensemble finale. This is in addition to a smaller set of individually tuned loudspeakers earlier in the piece, so that listeners hear a crescendo as the last segment is experienced. The piece concludes with a fade back to the city ambience as you leave the line.

A guitarist is revealed on the edge of his bed, playing long, slow lines. His eyes are closed, mesmerized by the group improvisation. As you explore “The Visitors,” an installation by Icelandic artist Ragnar Kjartansson at the Broad in Los Angeles, you encounter an accordionist, a cellist and Kjartansson himself playing acoustic guitar while lounging in a bathtub, along with others who include a chorus of singers sitting on the porch of the old home in upstate New York where the musicians were recorded. The sounds blend beautifully and encourage you to lean in to take in closer detail—both of the image and of the part each plays.

The musicians each occupy a unique video display with a loudspeaker replaying a mix in which they are predominantly featured. The room is separated by a partition in the middle—daring you to listen to the hour-long piece from as many angles and mix perspectives as you have time for, but never promoting a single position as optimal. You feel as if the musicians presented on the nine screens are in the room with you, but they are all recorded in separate rooms of the house and monitoring each other with headphones, as seen in the videos. “The Visitors” uses architecture, sound and image to break down physical barriers, creating a work of the virtual world.

Encountering “The Visitors” at the Broad seemed particularly fitting in the context of “2018 Summer Happenings at the Broad,” a multi-part series in which different performances inhabited various areas both inside and adjacent to the museum. The styles of music and room acoustics varied dramatically, and, on this particular night, Chinese music not commonly experienced here in the US, encompassing ritual performance, punk, post-punk, psychedelia and more, was featured.

“The Visitors” encourages you to look around and hear the same music, as performed in separate rooms, from different perspectives, but “2018 Summer Happenings at the Broad” offered the opportunity to hear music performances in a wide range of acoustic spaces: the reverberant foyer and upstairs gallery, the low-reverberant enclosed space of Oculus Hall and the outdoor plaza stage. Those spaces were appropriately reinforced by sound designer Martin Carrillo, who relied on small, compact systems in the reverberant open gallery spaces; a more powerful point-source system in the theater; and compact line arrays in the plaza.

Each of the above-described works—experienced between 2017 and this month—emphasizes the “space” that spatial sound inhabits. Spatial sound involves not only perceiving location, movement and diffusion of sound in space, but also understanding how that sound in space is contained within the architecture, as well as the architectural acoustics in which the sound is experienced. Artists challenge us, whether by collapsing walls, implementing multiple video screens or utilizing site-specific sound reinforcement, to change our perspective of spaces.

New techniques, algorithms and methodologies for mixing sound spatially via workstations, consoles and “in-the-box” solutions will continue to draw our attention. However, “outside-the-box” thinking by artists and sound designers, along with projects realized by creative sound designers in disciplines that include theater and dance, remind us not only of the value of the arts, but also of the diversity of approaches taken in these disciplines.

The works by Gordon, Elff, Kjartansson and Carrillo not only help inform our methodologies, but also challenge us to reexamine how we think of—and experience—works that amplify our awareness of sound in space.