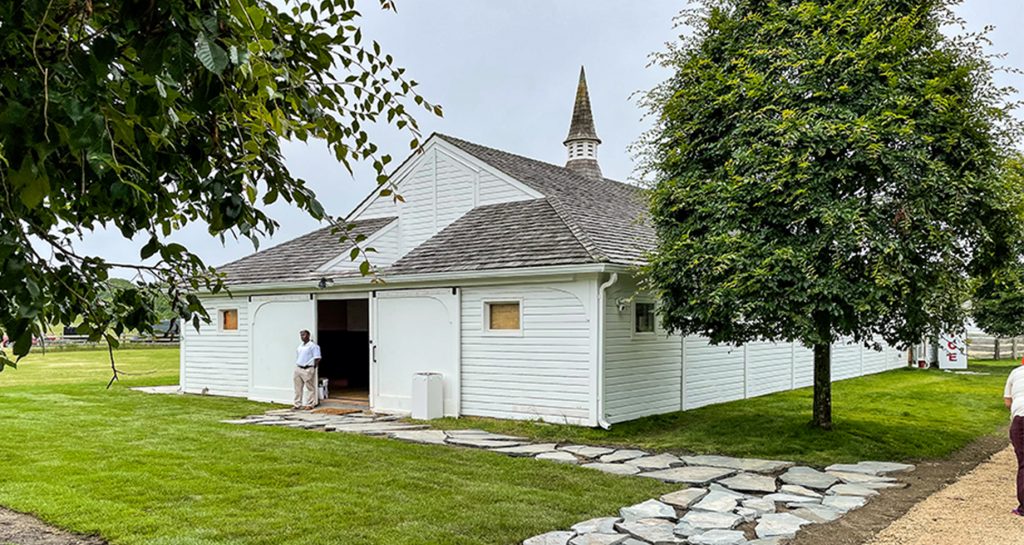 When it comes to setting the mood in art-gallery spaces, audio and lighting can be used to great effect. With that in mind, finding the right audio and lighting systems was a top priority for The Ranch, Long Island NY’s newest high-profile art-exhibition space.

The Ranch offers a fine example of how the right background music (BGM) and lighting composition can not only complement the artwork on display but also help to immerse the audience more deeply in the feeling that the art seeks to create.

The Ranch, historically known as Deep Hollow Ranch, is part of a sprawling estate in Montauk NY that is owned by art curator Max Levai. Levai purchased the 24.7-acre property in 2020 with the intention of converting its 2,500-square-foot barn into an art-exhibition space. The result is a destination worthy of the east end of Long Island’s tony seaside resort towns (collectively known as the Hamptons) and the area’s reputation as a gathering place for America’s pop-culture icons.

“The exhibition space contributes to the long history of the visual arts in Montauk,” Levai said. “This part of Montauk was a hub for artists; Richard Avedon and Peter Beard both lived down the road. It is within this extensive history of artistic and cultural activity that The Ranch finds its own imperatives. Beyond the visual arts, musical groups like the Rolling Stones found inspiration for albums at The Ranch, and Elizabeth Taylor, Lee Radziwill and Halston all congregated here.”

However, far from solely looking back on the influence of such iconic figures, The Ranch was conceived as a truly modern art-exhibition space that will draw on today’s technology to enhance appreciation of the art on display. To that end, Levai enlisted the services of K-array and New York-based integrator Global Audio Systems to design and install sophisticated audio and lighting for The Ranch’s gallery space, which is known as the West Barn. The system design also included a portable public-address (PA) system that can be flexibly deployed for additional sound reinforcement.

“Global Audio Systems’ job was to design the system as far as wiring was concerned—the powering of the lights—and to introduce a control system to combine the audio and lighting all in one platform,” Graham said. “We were working on a specification from K-array. Their engineers had designed the project and created a lighting layout where they had used simulations in DiaLux and KF3D [K-array’s 3D acoustic-simulation software] in order to predict how the lighting would look in that space and tell us how the audio would react to the space, as well.”

According to Waite, the client wanted a lighting system that would be evocative of Montauk’s natural light and a sound system that would enhance the gallery experience, without being visually or sonically obtrusive. “From the beginning, Max Levai, Owner of the Ranch, and his architect, Greg Tietjen of T-Arch Studio, were looking to preserve the historical feeling of the barn throughout the gallery,” Waite explained. “Without any windows, they were in pursuit of natural lighting that would not be in the way but [that, rather, would] enhance the colors in the artwork. Sonically, they were primarily looking for a quality BGM system that would be unobtrusive to the eye—especially not to take away from the art—yet provide the guests with an immersive feel, whether the room was being used as an art gallery or an event space. [It was] a difficult scenario, especially with wood-cladded ceilings and walls, but not so uncommon to K-array.”

Of the 30 RAIL fixtures hung in the West Barn, 24 are equipped with sound reinforcement; those are arranged in two parallel rows of 12 that run along the long sides of the room. The remaining six RAILs serve to connect the audio-equipped rows of 12, and they also provide lighting support for the short sides of the room. The solution was a K-array KSCAPE RAIL system, which combines audio and lighting into one visually low-profile package. Each individual RAIL fixture measures 1.2 meters (approximately four feet) in length and is equipped with professional LED lighting. Most, but not all, of the RAILs installed at The Ranch are also equipped with speakers for sound reinforcement.

In The Ranch’s main gallery, the West Barn, 30 RAIL fixtures are hung pendant-style from the ceiling. “The fact that RAIL can be hung pendant-style gives the room a very clean feel and keeps the lights higher and out of the way of the focus of the space—the art,” Waite said. “With the vaulted ceiling having a max height of 18 feet, pendant hanging of the whole RAIL system with minimal aviation cable was very important. We wanted to ensure that whole structure felt like it was floating in space and not blocking any of the possible wall space. The tracks are very slim and, therefore, very pleasing to the eye, even in pendant style.”

Of the 30 RAIL fixtures hung in the West Barn, 24 are equipped with sound reinforcement; those are arranged in two parallel rows of 12 that run along the long sides of the room. “For the audio, we elected to provide a full stereo system, with the RAILs lengthwise all having integrated speakers,” Waite said. The remaining six RAILs serve to connect the audio-equipped rows of 12, and they also provide lighting support for the short sides of the room.

Two K-array Kommander-KA24 amplifiers power the RAIL system’s audio components. They offer digital signal processing (DSP) and four channels of distributed audio each. “One amplifier channel can handle 12 of the RAILs in sync with each other,” Graham explained.

Low-end sound reinforcement comes via two K-array Rumble-KU26 subwoofers, which are installed in the walls of the West Barn. The same amplifiers that drive the RAIL speakers power those subs. “There are two [amplifier] channels for the subwoofers,” Graham said. “That way, we can have them designed in a stereo format—left and right—which is more immersive than having it in a mono format where everything is built into one channel.”

The Ranch also has two K-array Event-KREV101 portable-PA systems at its disposal. They can be flexibly deployed for additional sound reinforcement, particularly for performances or gatherings that take place outdoors.

On the lighting side, RAIL enables a high degree of customization, with options for symmetrical, asymmetrical and mini-spot lighting, as well as an electrified track that allows for the flexible placement of adjustable magnetic spotlights. For The Ranch system, Waite and K-array considered which specific lighting options would best complement certain parts of the space. “RAIL is a fully customizable product line that offers not only symmetric or asymmetric downlighting but also the ability to have electric tracks with spots,” Waite said. “All types of RAIL can also have uplighting. The approach to the lighting, therefore, was trifold. As the barn structure has vaulted ceilings, uplighting offers enough light on its own, as it reflects off the white wooden panels. For the walls, it was decided that asymmetric lighting would enhance any artwork. And, for special areas, additional spot lighting can also be integrated.”

Waite added, “Each 1.2-meter section of RAIL actually has 360 high-quality Nichia LEDs mounted directly on a PCB [printed circuit board] that provide a CRI [color rendering index] greater than 95, which is ideal for art, in particular. And, thanks to the customization of the RAIL, we could control glare with ease using the asymmetric linear [lighting option] at the right height.”

Audiences enter the West Barn gallery space through two adjoining corridors; each of those corridors is equipped with 12 RAIL fixtures. “In the corridors, they are flush mounted into the ceiling with a wave guide for the audio to pass through effortlessly,” Waite said. “[They provide] a mix of symmetrical downlight and electric spots, all with DALI [Digital Addressable Lighting Interface] control.”

The lighting system is built on the DALI lighting-control protocol and is controlled via a Lutron Athena platform powered by a QSN-2DALUNV-S DALI power module. “For control, it was deemed that DALI being controlled by a Lutron commercial control system could independently dim control each module, the up- and downlight separately, and the spots,” Waite explained.

The West Barn and the two hallways each have their own Lutron QSWS2-5BRLN-WH wall panel that can be used for local control. “Each of those keypads has five different buttons on it—[this] allows for five different scenes—as well as an up and down arrow at the bottom for direct-dimming capabilities for the room that the keypad is located in,” Graham said.

The Lutron lighting control is also integrated into a Control4 system that can be used to control the lighting and audio in the West Barn and the hallways. “We have a TP-Link switch that is built in our rack to distribute the Cat6 connections for the Control4 and Lutron integration,” Graham said.

“Control4 allows them to turn on the lights and have the speakers start playing a certain Spotify playlist or anything like that at a set volume with the click of one button,” Graham said. “They always have the flexibility to control everything manually, as well. But, if the client has certain visions for their different lighting looks and presets—[for example,] if they want to play smooth jazz in the background with the lights dimmed down to 40 percent—that’s something that we could create a preset for. They can just press a button, a preset playlist will start to turn on at a certain volume and the lights will have a certain look that’s meant for that mood.”

Audio inputs are distributed via a Triad Audio 8×8 audio matrix switch. “Over Wi-Fi, they have a Spotify driver where somebody can bring up Spotify on their phone and select the Control4 system as their speaker source,” Graham described. “The matrix switch is also taking in a Sonos Port input. They can use Sonos to access many different streaming services through one media player. That would allow them to find any radio stations they want to use, or it could have Amazon music, Apple music, Spotify or downloaded music.”

According to Waite, feedback on the audio and lighting systems has been positive. “As soon as the lights were turned on for the first time, Max was convinced that he had made the right choice,” Waite said. “The fact that you can hear the sound but have no idea where it is coming from gives Max and his team a chance to create a really unique experience.”

Levai confirmed that the technology met his expectations for the space and that it enhances the viewer’s experience of the art. “The natural light in Montauk was our inspiration for the lighting system––it is really what makes this area so special and what we aspired to capture,” he said. “But, in a traditional barn, the goal was to achieve a solution that was versatile and could be tailored to the needs of the wide variety of artwork we will exhibit. K-array provided us with extreme latitude in adjusting the lights for the changing demands of the lighting conditions each unique body of work requires.” He added, “The lighting is, of course, critical in allowing a work of art to shine and exemplify the small surface details that might be hard to see. One thing I was struck by was the way that the lights brought out elements of paintings I’m extremely familiar with but had not seen under other conditions.”