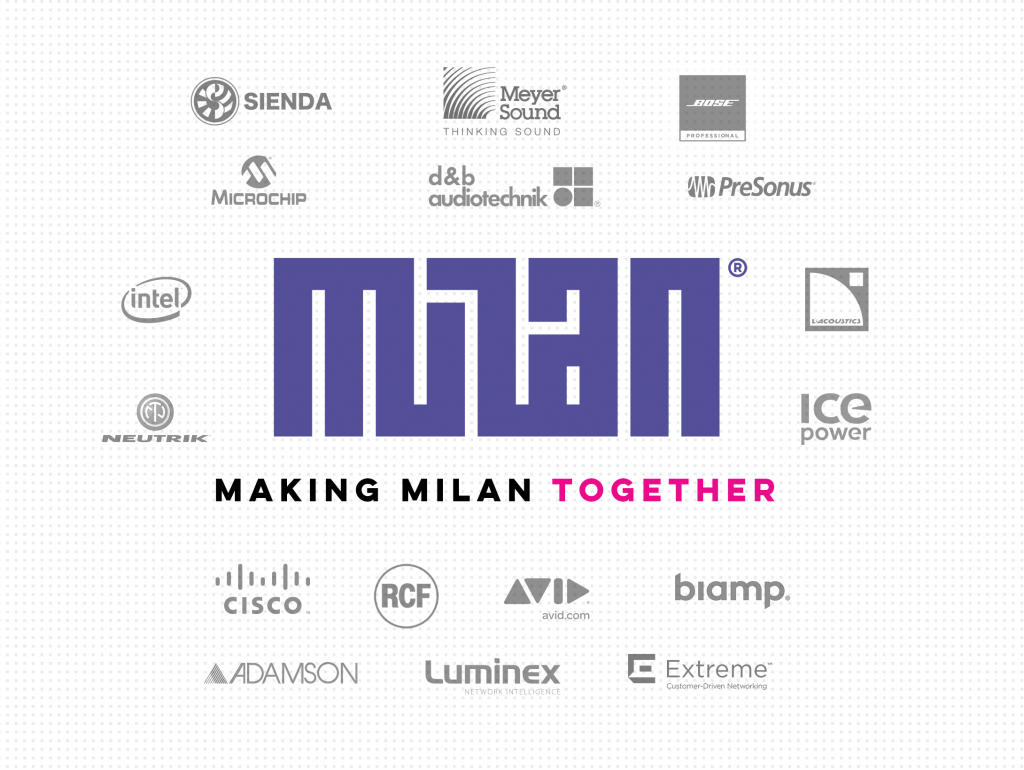 The latest Milan developments and updates, along with real-world applications.

Since we first announced the Milan protocol almost two years ago at InfoComm 2018, we’ve seen continued growth—new products and projects, members, and specifications and test plans—all contributing to the momentum. Created by leading commercial AV manufacturers under the umbrella of Avnu Alliance, Milan is a deterministic network protocol for professional media. It’s a networked system architecture that guarantees interoperability among Milan devices, based on AVB, and that assures devices will work together at new levels of convenience, reliability and functionality.

This year, we’re seeing the momentum continue. From Milan-ready products in the market and under development, to new members contributing to Milan, to our plans to finalize certification and streamline membership, Avnu believes it’s clear there is still plenty of growth and there are many new opportunities to come for Milan. Our goals are to make Milan easier for manufacturers to implement and for end users to deploy; we’re excited to see those goals achieved in 2020.

Recently, we released a whitepaper1 that provides an overview of Milan’s current value proposition and the direction we hope to see it take this year and beyond. What follows are a few key takeaways from that whitepaper. Also, interspersed throughout, you’ll find select case studies of Milan in the market.

Networking is the enabling technology that allows us to deliver rich experiences for live sound and commercial AV applications. With data and network connections growing rapidly, the future of AV and IT is that, eventually, everything will be networked. At the same time, expectations for audio and video continue to grow and evolve, thus increasing demands made of audio/video networks. Among those increased demands is to connect more devices. With AV increasingly residing on the network, it becomes part of the larger IT ecosystem. The network, which provides connectivity for individual components so they can work together, becomes the grid that defines system architectures. At the same time, interoperability between devices is a necessary and important part of connectivity success. This raises a question, though: What does all this mean for manufacturers and integrators working with these devices?

Audio and systems engineers expect more. They should be able to realize the functionalities in their systems. Their network should always work—and it should be easy, reliable and futureproof. What’s more, as consumer technologies continue to advance, audiences have come to expect a richer experience for live sound and other commercial AV applications. The network must now become part of the value proposition for manufacturers…it must be open for creativity to enable truly valuable products to come to market.

For that to happen, manufacturers must work together, openly sharing information on technology and products and, together, defining the requirements for greater network interoperability. This vision for networking should encompass the ease of the analog XLR connector and transform it into full media and data interoperability.

The industry has to refocus on delivering a futureproof audio solution that can scale. When it comes to networked audio platforms, the professional media industry, at the most basic level, requires guaranteed delivery of high-quality audio—that is to say, not subject to dropouts, phase shifts or comb-filter effects on line arrays. However, the industry has to meet that requirement with a long-term, stable and viable platform that evolves with market demands. When making decisions on networking infrastructure, end users must be confident they’ve chosen an enduring standard and a network that can provide support as their media and data needs scale—for today, for tomorrow, and even for years from now.

Many of today’s systems have been knitted together using proprietary networking solutions; they require extensive design, installation and support work from industry professionals and create risky propositions that are not guaranteed for long-term viability. As the network has evolved and continues to scale, so, too, has the opportunity for the industry expanded. The network should not be a competitive market on its own, nor should it be a bottleneck for innovation.

Milan is not just enabling network connectivity; it’s also the grid on which to build for the future. Created by, and chosen by, commercial AV leaders in Avnu Alliance, Milan is the manufacturer’s network: the technical and business decision for the top leaders in the market. As manufacturers, we are in direct competition with one another, but we’ve chosen to come together, collectively, to take the driver’s seat in creating and advocating for the change we want to see in the pro-audio market. Through this process, we’ve brought to life a vision for a complete media network—a network that is easy to use, futureproof, open for creativity, scalable across markets and able to deliver a convergence between audio, video and control with IT on one network.

What is Milan’s impact on network systems and technologies? As a layer-two technology built on a deterministic networking standard, Milan was created first as a network for live productions and events. Live sound isn’t the only application for Milan, however; it can also be leveraged in fixed-installation applications, such as in enterprise or entertainment settings. And although, thus far, most of the projects that leverage Milan have been live-sound environments, the protocol is built on an open standard, which means it has broad market appeal; moreover, it’s supported by IT and interoperable with the entire stack of standards technology in multiple markets, making it an enduring standard that both AV professionals and IT departments will embrace. With its foundation in open standards, Milan enables increased flexibility and reduces total cost of ownership (TCO) by bringing an economy of scale, thus minimizing deployment and maintenance time. Plus, the open nature of Milan allows manufacturers to build their systems while having ownership over the network.

With Milan, we’re aiming to achieve ease of use around networking for end users, ensuring it just works and keeps working; moreover, we’re aiming to be a system architecture for manufacturers, providing them with the right tools with which to build their system platforms.

In addition to new products and member additions, there are plans for a streamlined product-certification program so that it’s quicker for all Milan devices to go through the certification process, while still ensuring interoperability.

Milan is always evolving; thus, we’re still working on ways to make it easier to implement and to make the solution better for end users. But you can bet that Milan will be better because it has to meet our customers’ high expectations.

As both manufacturers and Milan members, we’ve agreed to own the network as the foundation for our own company value proposition. In doing so, we’ve created a collaborative, deterministic network standard—one that’s for the industry and by the industry—that, when certified for interoperability, can meet commercial AV’s challenging requirements and adapt to meet future requirements as network capacity and demands scale.

Milan is the foundation to build on for the future. Learn more at www.avnu.org/Milan, as well as on Twitter (www.twitter.com/Avnu_Alliance) and LinkedIn (www.linkedin.com/company/avnu-alliance).

Case Study 3: Neutrik Milan Module: Expanding The Capabilities Of Milan In The Market