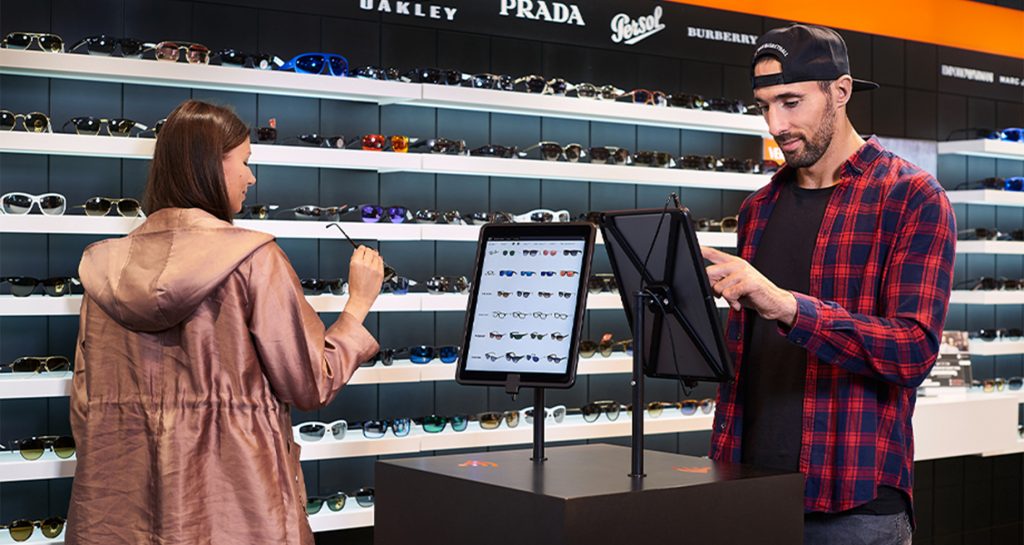 Image courtesy of Edel-Optics.
Although the pandemic initially dealt in-person, browsing-based retail a significant blow, the latest data offers auspicious indicators for a strong rebound this year and beyond.

The pandemic has manufactured more than enough negativity and pessimism to go around. This month’s column begins on that negative note, but that’s not where it ends. Today, we’re talking retail, and AVIXA market research shows it’s a happy story.

One year ago—the summer of 2020—the second quarter had just ended and the outlook for retail was dark. Second-quarter retail sales had fallen six percent below trend, and things were looking even worse as retail pertains to commercial AV. Commercial AV does not benefit from all retail dollars; instead, commercial AV retail technologies are in-person (digital displays alone are a third of all retail spending dollars), and second-quarter retail had seen a massive shift toward online. Brick-and-mortar sales were 11 percent below trend, whereas ecommerce sales were 27 percent above. Even within the brick-and-mortar category, the news was bad: Retail spending was concentrated in commercial-AV-light staple-goods areas, such as grocery stores, as opposed to retailtainment browsing. With the way that consumers were spending, retailers had little money and little motivation to make a significant commercial AV investment.

There was one cause for optimism, however. At the start of the pandemic, AVIXA took on a research project as part of our quarterly Macroeconomic Trends Analysis (META) series to study how major societal crises affected preferences. We studied the broad lessons of historical crises, such as the Great Depression and the Spanish Flu, and we looked narrowly at the fundamental value of in-person retail. Both aspects showed good news. The broad research indicated that, although such calamities massively change behavior, they do so only temporarily; mid-crisis behavior is a function of circumstances, rather than fundamental changes to consumer preferences. Our retail-specific research found signs of enduring value for brick-and-mortar retail. Consumers saw irreplaceable benefits in the act of in-person shopping; those included the experience of browsing and the value of being able to test products physically before purchasing them. Even in the face of the early-pandemic conditions, these findings gave hope for future dollars being spent on commercial AV in retail.

Six months ago—the winter of 2020 into 2021—there was growing cause for optimism in retail. Early this year, AVIXA published the 2021 First Quarter META report, which studied the actual performance of commercial AV vertical markets during 2020. We looked at US government data on overall measures of economic activity and uncovered a few surprises. Retail was perhaps the biggest surprise. After falling well below its pre-pandemic trend in Q2/20, sales rebounded immediately. Q3/20 saw overall sales five percent above their pre-pandemic trend; in fact, even brick-and-mortar sales were two percent above pre-trend! The numbers were the same for Q4/20, as well. To stress the positive, the rebound in brick-and-mortar retail meant businesses had more funds and more reason to invest in commercial AV technology.

The data didn’t represent perfect news for commercial AV; we know that the sort of browsing-based shopping that motivates the highest levels of commercial AV spending remained uncommon. Still, the long-term indicators were bullish. For one, consumers’ willingness to spend more money at brick-and-mortar retailers during the pandemic helped reinforce the value they assign to in-person shopping. Second, the high level of spending in the second half created a positive financial situation for retailers. Their financial strength positions them to make significant AV investments this year, as they fight to attract customers who are returning to the pre-pandemic, browsing-based, retailtainment-style of shopping that fueled the rise of commercial AV spending in retail over the last decade.

In the retail space, there is now greater optimism than ever. On the obvious side, vaccines have ended the worst of the pandemic, and consumers are returning to their pre-pandemic habits. Vitally for commercial AV retail dollars, we’re already seeing recovery in key metrics, such as mall traffic. Also important is the role of stimulus. The US, in particular, has made massive investments to counterbalance the pandemic’s devastating effects. What’s more, as compared to previous efforts, the pandemic-era stimulus expenditures—especially the American Rescue Plan Act—have been aimed at individual citizens. With dollars flowing to individuals in the form of stimulus checks, child-tax-credit checks and expanded unemployment benefits, consumer-focused industries are seeing increased revenues. Retail, in particular, saw an especially big spike this past March after the latest round of stimulus checks went out. Especially as in-person shopping rises, this spending spike will likely be an impetus for AV investment.

We’ve established that retail dollars are forthcoming, but how will retailers spend those dollars? That’s a question for forthcoming AVIXA research. Our refreshed Market Opportunities Analysis Report (MOAR) series studies how business actually happens in key vertical markets. To tease one finding, video projection is the product category with the largest planned spending increase, although it is essentially on a par with video displays. Stay tuned for more!

The last five quarters have been marked with negativity. At first, it looked like retail would be among the pandemic’s casualties. But, after the initial downturn, positive signals coalesced. Research reassured us of the long-term value of in-person retail, and the second half of 2020 saw retail sales rebound strongly. Full recovery will take time, as the browsing-heavy shopping that motivates the greatest commercial AV investment will be the last piece to rebound, but the sun is shining on retail.