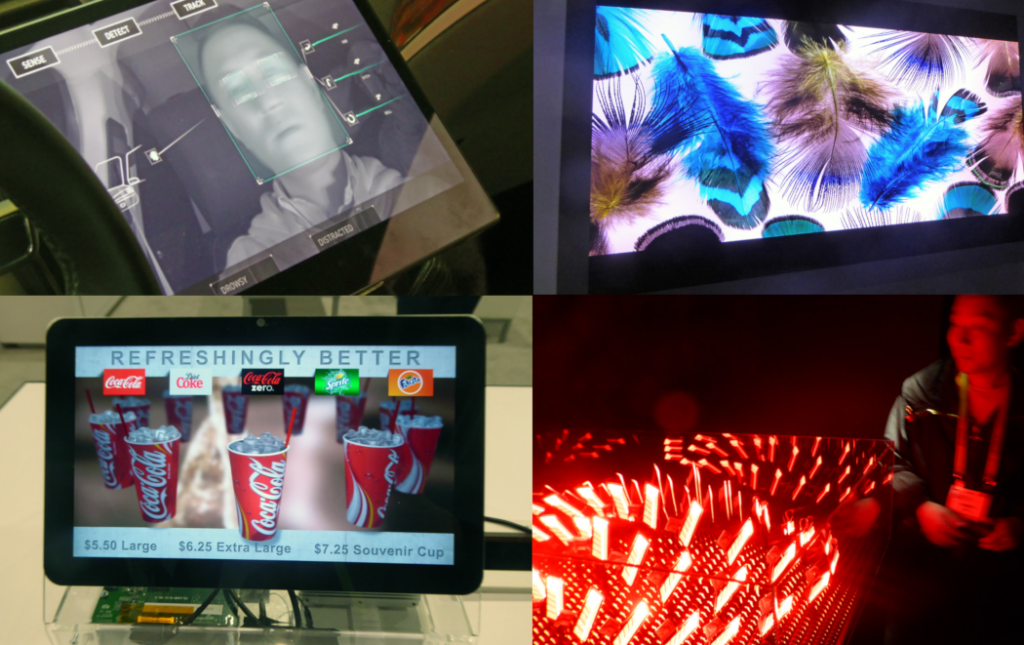 A few sights from CES.

As I write this, it’s the second full week in January and I’ve just finished sorting hundreds of photos and several dozen videos from the Consumer Electronics Show (CES, as everyone formally knows it), editing them down to a manageable lot. From the time I first attended the show nearly two decades ago, CES has slowly evolved away from being an exposition of standalone high-tech gadgets to become more of a “World’s Fair” or lifestyle/technology concept show.

Early on, the attractions for me were high-definition rear-projection televisions, advanced plasma display technology and a new crop of LCD televisions that promised full-HD (1920×1080) resolution. Back then, DVD was an established technology for standard-definition video, and blue laser HD formats (HD DVD and Blu-ray) had yet to make an appearance. Wi-Fi was still pretty slow. Tablets and smartphones didn’t exist yet, nor did video streaming. (VHS was still a viable format back then!) TV networks were slowly coming around to broadcasting in high definition.

And all this technology was expensive. A good plasma TV in 2003 could set you back more than $10,000, and some models went for as much as $30,000. Rear-projection TVs weren’t much cheaper. Loaded DVD players cost hundreds of dollars, and a decent digital TV set-top box was north of $700. A gigabyte of solid-state memory was an expensive proposition back then.

All these products infiltrated the commercial AV space, and, in a few short years, a new expression had been coined: “the tail is wagging the dog.” It meant that the path from technical innovation to mass-market adoption had been inverted, trickling up from consumer devices to eventual commercial adoption and installation.

Fast-forward to this year. We’ve blown by full-HD displays and TVs to ultra HD (4K), and, now, a new wave of 8K TV sets is hitting the market. LCD screens that are 42 inches, once considered “big,” are pipsqueaks. Now, thanks to super-low prices, 65 inches is becoming the norm for homes and classrooms. Home-theater projectors are giving way to 70-inch, 85-inch and 88-inch LCD and OLED TVs.

The Blu-ray optical disc format matured to Ultra HD Blu-ray, but not many people care about it anymore, because they’re streaming full HD and 4K video from YouTube. That’s possible because of super-fast Wi-Fi that uses channel-bonding techniques. Now, 60GHz Wi-Fi, which has been lurking on the sidelines for years, is poised to go mainstream. And a 32GB flash memory card or thumb drive can be had for less than $20.

In fact, just about every piece of hardware shown at CES sells for bargain-basement prices, with the exceptions being exotic products like 98-inch 8K televisions or roll-up OLED TVs. More and more of these products now move through distribution as retail prices drop. And all of them will make their way into your upcoming AV installations as the lines continue to blur between the conference room and the living room. (After all, what are huddle spaces if not riffs on the family room or kitchen?)

Here’s what you’ll have to think about this year:

1. Artificial intelligence (AI) is here, and its adoption is happening faster than you think. At CES, multiple TV manufacturers showed next-generation AI implementations that could remember the TV programs cooked or ordered yesterday, or that doctor’s appointment you made two weeks ago. Accordingly, all these voice-actuated systems (Google, Alexa, Siri, Bixby) can anticipate what you’re likely to do or say next, and they’ll offer up suggested actions and options.

AI isn’t just found in TVs, either. Major appliances are also incorporating speech recognition and linking themselves to other devices in the home and office through internet connections. I saw demos in which I could start a robot vacuum cleaner, set the thermostat, change lighting levels, see who’s at the front door, answer my phone, start and stop the washer/dryer, check on the food in my refrigerator and activate/deactivate an alarm system—all from one screen, and all by simply using my voice.

In another demo, a camera could detect my emotions and determine whether I was paying attention, nodding off or had left the room. None of this technology is expensive or difficult to implement, and all of it relies on Internet of Things (IoT) wireless connectivity. AI is already migrating into our industry, and a fully loaded AV control system implementation, like those seen at CES, will happen within the next five years. Of course, adoption of AI and voice recognition for control systems will raise some big security issues, given that any of those connected devices can be (and, indeed, have been) hacked.

2. Yes, 8K displays and televisions are really coming! It’s not a fad. Thanks to overcapacity in Asian display-panel manufacturing facilities and aggressive pricing, we will have multiple vendors that offer native 8K-resolution LCD and OLED displays at InfoComm within a year or two. And, no, it doesn’t matter that there’s virtually no 8K video content to watch at present. After all, our industry is transitioning to 4K resolution for flat screens and LED walls, even though there’s not a lot of 4K content out there, either.

Bear in mind that the image-scaling processors are so good in these 8K sets that even standard-definition video looks decent on these huge screens, thanks to another type of AI. Some companies have already figured out complete 8K video production, editing, storage and delivery systems (NHK in Japan is leading the way here). To top it off, an 8K Association was announced at CES, which will promote, and educate everyone about, this new format.

3. LED displays are taking over everything. You already know about fine-pitch LED tiles—they’re in everyday use, and they have reached resolutions as fine as 0.8mm. Now, there’s a new batch of “mini” LEDs being used as direct-view displays, as well as backlights for largeLCD panels. Several TV manufacturersshowed TVs with “mini” backlights atCES, offering more local dimming zones.

It won’t stop there, either. One company previewed a 75-inch 8K TV with a “micro” LED backlight prior to the show. Micro LEDs are super-tiny chips that can almost match display pixels in size, providing high levels of illumination and creating a new class of emissive displays with high dynamic range (HDR) and super-saturated colors. I had discussions with a display analyst who said a major manufacturer of LCD panels now wants to exit that business and, going forward, concentrate on mini and micro LED displays for TVs.

LEDs have been steadily eroding market share for large-venue projectors, and they’re competing with tiled LCDs for videowalls. Eventually, they will replace both LCD and OLED technology for a clean sweep across the display board. It won’t happen tomorrow, but I predict it will happen in the next decade.

4. We’ll be more dependent on wireless than ever. I saw some really clever demonstrations of high-speed gaming, 4K video streaming and display connections, super-fast fi le transfers over USB 3.0 and near-field high-bandwidth connectivity, all using 60GHz Wi-Fi technology. Imagine a 75-inch 8K display with no wired connections, yet it’s able to stream 8K video at 60Hz with 10-bit 4:4:4 (RGB) color! That requires a data rate of more than 85Gb/s, but it can be done right now with nearfield 60GHz connections.

Of course, no CES would be complete without the usual hype about 5G wireless. Numerous manufacturers showed prototype 5G wireless access points (WAPs) and modems. Others promised insanely fast video streaming from 5Gbased cloud services. Yet, almost none of these tech evangelists took the time to explain how, exactly, 5G will deliver the long-promised 1Gb/s upload and download speeds. (It has to do with the actual wireless frequencies in use, which must be well into the microwave and millimeter-wave bands.)

There was plenty more to see, of course. But AI, 8K, LEDs and wireless were, for me, the dominant themes at the show, overshadowing things like drones, robots, virtual reality (remember VR?) and autonomous cars. To be sure, all these technologies were on display, along with the usual goofy products and bling. I’ll touch on some of those other trends in future columns.