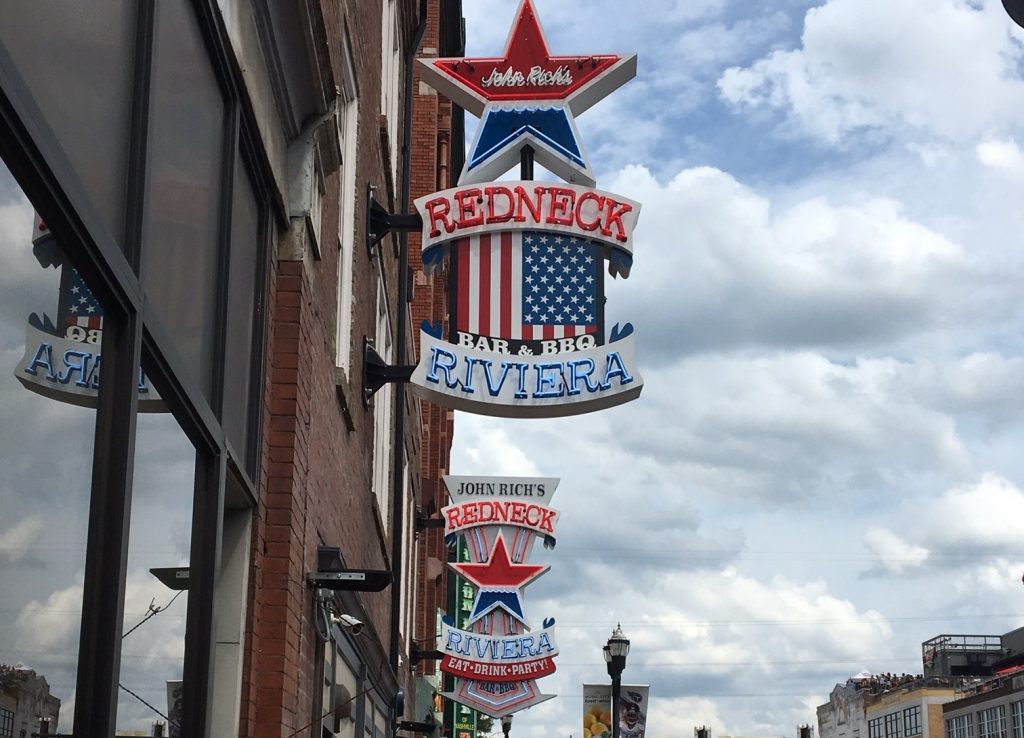 Redneck Riviera's sign juts out over Nashville's crowded, noisy Lower Broadway amid a growing slew of branded bars, restaurants and honky tonks. Its carefully planned AV helps it stand out.

Do you miss being able to wander the aisles of Tower Records, poring over CD titles from trays full of popular country artists? If so, you can get that same effect right now by walking along Lower Broadway in Nashville TN. Over the last several years, bestselling country-music artists including Dierks Bentley, Luke Bryan and Blake Shelton have all put their names on a steadily expanding streak of branded bars, restaurants and honky tonks that line the noisy thoroughfare. What you won’t get to see, however, is any of those country music stars themselves; most of them have basically lent just their rhinestoned nameplates to these ventures.

That’s not the case at Redneck Riviera, where John Rich, half of iconoclastic country-rock duo Big & Rich (“Save a Horse (Ride a Cowboy),” “Big Time,” “Live This Life”), oversaw pretty much every inch of the place, which he had his brother, Isaac, actually build. Rich even had himself a seat built next to a window on the first floor of the three-story, 8,000-square-foot palace of Americana hospitality; from his perch, he can reach out to the sidewalk to greet his adoring fans, whether outside or inside. And the crowds know he’s there when a neon sign of his likeness glows in the bar’s front window.

Rich turned to Sound Image Integration, the Escondido CA-based integration division of Sound Image, the longtime tour-sound provider for Big & Rich, for the AV systems integration at Redneck Riviera. (That, in itself, is a growing trend, as touring sound-reinforcement providers, such as Clair Brothers, begin to delve deeper into installed-AV systems integration.) Sound Image Integration’s Jason Schmidlap did the systems design, and Rob Bastin, Big & Rich’s front-of-house mixer on tour this year, was designated as Project Manager. “There were a ton of challenges at Redneck Riviera,” Bastin revealed. He wasn’t being hyperbolic.

Big Sound In A Tight Space

Not surprisingly, Redneck Riviera is all about music. There are bandstands on all three floors. The performance stages are fitted with QSC WideLine speakers hung in left-right line arrays for each stage, three modules per side. However, the relatively low ceiling heights on the first and second floors—seven feet and 10 feet, respectively—and the heating, ventilation, and air conditioning (HVAC) ducting that runs beneath them meant that the sound system for live music also required a distributed aspect. A combination of QSC eight-inch and 10-inch surface-mount speakers are installed around the periphery of the floors. They are used for the audio component of the Screencast music-video system that takes the place of a jukebox and that’s distributed throughout Redneck Riviera.

The main floor stage had its own particular challenge. Broadway’s honky tonks tend to put the bands in the front windows, with drummers’ backs to the street, on stages that face into the room. To give a sense of Redneck Riviera’s layout, the club is built into a pair of mid-19th-century buildings whose façades are landmarked and whose interiors are newly buttressed with steel girders. The stage and the PA system on the main floor had to be twisted around a support column to cover the audience areas, but still keep the stage backed up to what would be a $50,000 custom-made sliding window that opens the venue onto the street.

Bastin adjusted the PA system’s geometry to meet that challenge, while adding one additional WideLine speaker in a transom over the window to send a more controlled mix of the music into the street. It also helps control the volume that spills onto the street, important because dueling club PA systems have led to more highly restrictive noise ordinances, which are being more strictly enforced.

A similar PA system that will be added to the roof bar will serve the live performances there (currently, a portable system is in place). That’ll connect to another challenge that is endemic to downtown Nashville these days: roof wars. Clubs along the strip have been amping up their systems—and even, it’s been said, aiming them at one another. “When you look across the street and see a venue that’s 45 feet deep, but has a line array on the roof that can throw 245 feet, either (a) they have an installation engineer who didn’t know what he was doing, or (b) it’s intentional,” Bastin said archly. “It’s an ongoing battle. The sound draws people’s attention and gets them in the doors.”

Both the PAs and the distributed systems are controlled through a QSC Q-SYS network. When bands begin to play, a manager will select the “Band” setting on a QSC TSC-7t touchpanel in the bar area that mutes the peripheral speakers. The transom speaker that faces the sidewalk is left on, but slightly attenuated, to avoid potential feedback problems if the drummer’s vocal microphone is being used. The main speakers and the subs under the stage are also time-aligned, with the mains delayed slightly to let mid and upper frequencies converge coherently with lower ones.

Another tactic for dealing with loud music in a tight space is the use of wireless iPads to mix the stages. Midas M32R consoles are set up next to each stage, but the mixes are actually done by engineers using Midas’ iOS app. “Every square foot down here is $1,000 a month and it’s not worth it to take out seats to create a traditional front-of-house position,” Bastin explained. “The M32Rs act like a base station for the iPads, and the Midas apps let them access every major function and feature that’s on the actual console.” He added that the iPads run on a completely separate virtual local-area network (VLAN) on the venue’s Wi-Fi. According to Bastin, its service set identifier (SSID) network address is kept hidden from patrons on the venue’s wider wireless network to keep traffic away from its frequency.

Getting The Big Picture

There are 27 50-inch LG video displays throughout the venue. They play the Screencast content when live music is not being performed. The venue has two separate video capture and distribution systems. One is intended for streaming distribution and uses Livestream’s Mevo cameras for social-media platforms like Facebook Live. The other is used for internal purposes, sending live performances from one stage to screens throughout the venue. The latter uses Marshall CV350-10X compact full-HD cameras that feed a Contemporary Research QMOD-HDMI 2 modulator. Audio for those feeds is taken directly off the front-of-house consoles at 44.1kHz in the PCM format. (The Mevo cameras have built-in microphones, but they also have a USB port that, according to Bastin, might be used as an audio output in the future.)

Audio and video intersect here in an interesting and challenging manner. The Contemporary Research modulator is state of the art, but it still creates a 500ms delay in its format-conversion process to MPEG4 video. Once he realized that, Bastin had to dial a delay into the PA system’s processor by that much to get them to synch when patrons on the second floor are watching a performance from the first-floor stage on the video displays. However, there is also the physical transfer of energy from the first-floor stage through the ceiling to the floor above. There was no way to delay that! However, Bastin did find that, by pushing the PA subs further back, up against the outer shell of an Airstream trailer that forms the back of the stage, it helped mitigate the time differential. “There is a lot of math in this installation,” Bastin affirmed, adding, “but also a lot of magic.”

Bastin estimated that there is about 30,000 feet of cabling in Redneck Riviera. Most of it is Cat6 used for the video and touchscreen controllers, and twisted-pair copper for audio. West Penn 12-4 (gauge/number of strands) is used for the main PA speakers and 12-2 is used for peripheral speakers. These run through chases between floors left by the general contractor, and conduit through walls that Sound Image technicians installed. They’re passed through to a pair of Middle Atlantic racks in the basement. There are also two R&R portable racks—one for each main stage—that hold the key processors for each stage’s audio. It’s a tour trick that Bastin has applied to the club environment.

“Nothing ever fails in rehearsal—only during the show,” Bastin said, reciting a well-worn aphorism among tour-sound professionals. “This way, if a component fails during a set, we can get at the rack quickly and replace whatever we need to quickly, or we can down a whole new rack.”

According to Bastin, working with John Rich on the Redneck Riviera project was in some ways an extension of what they do together on tour, but it was also unique. “John’s amazing,” he enthused, “and I know what he expects in the way of how things should sound and look. And he respects my opinions as an engineer on how to achieve those things.” He added, “But, for the club, we had to look deeper at a number of other things.”

Those “other things” included how the AV systems are operated on a nightly basis, particularly the live-sound systems in the incredibly competitive environment that is Nashville’s ever-louder music and hospitality strip. (A JW Marriott, and the boutique Cambria and 21c Museum Hotel, have recently opened nearby.) Bastin said the pool of local live-sound engineers might be the weak link in that equation. “Most of them have a tendency to treat it like a honky tonk, instead of as a serious performance space,” he lamented.

Careful vetting of Redneck Riviera’s acoustics and system settings helps mitigate that tendency by giving engineers a good starting point; also helpful is the use of wireless mixers, which lets them hear what the audience does. Finally, Bastin can check in on all the systems from anywhere through a networked connection to the Q-SYS system.

“If I get a call from the bar and they say they need more volume, I can check on how hard the amps are getting hit, add some headroom and open up the volume threshold, if needed,” he explained. “There’s a lot more tools available to us now.” And that’s a good thing, because there are a lot more venues, too.