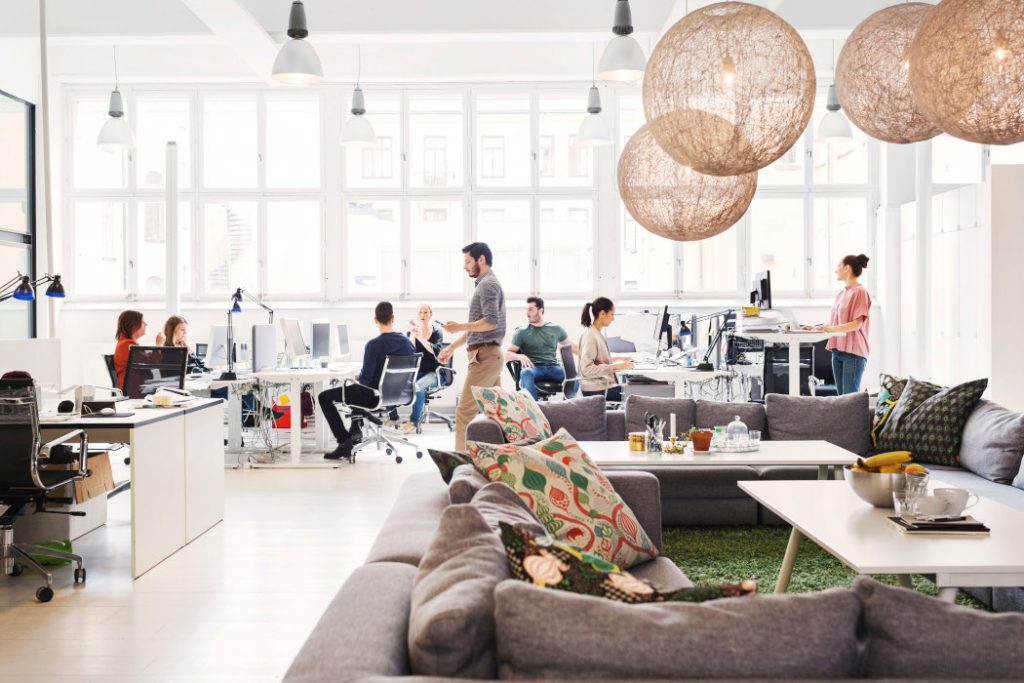 The open office is visually stunning and irrefutably popular. As companies strive to create better workspaces for their employees, they often favor the open-office design. At first glance, open offices seem beneficial, promising to save thousands of real estate dollars and foster an environment conducive to productive, collaborative work.

However, as many workers are now painfully aware, open offices aren’t living up to the hype. Noise and other distractions are more rampant and intrusive than ever before. In fact, a study out of the Center for the Built Environment at the University of California, Berkeley, that surveyed more than 63,000 respondents from the US, Canada, Australia, Europe, Mexico and Africa found that speech distractions were among the top complaints about open-office layouts.

Noise distractions are further intensified by the inherent design of open offices. A 2014 CoreNet Global survey reported that the average square footage per worker dropped from 225 square feet in 2010 to 151 square feet in 2017, with personal workspace steadily decreasing at a rate of 9.25 square feet per worker per year. As companies tear down walls and private offices in favor of communal desks and “collaborative” spaces, employees are losing their privacy and contending with a greater number of unwelcome office conversations and overheard calls, along with keyboard clacking and other distracting noises.

About six years ago, my company jumped feet first into this collaborative new way of working and transformed Poly’s headquarters, in Santa Cruz CA, into a modern, open-office layout. Quickly, we came to understand the challenges of actually working in an open-office environment. Despite the refreshing new office look, our associates found they were collaborating less, they were more distracted and they felt less productive than ever before. How could an office designed for collaboration create such intense dissatisfaction?

That paradox compelled us better to understand open-office dynamics. In June 2016, we partnered with global research firm Oxford Economics to publish “When the Walls Come Down,” a report that surveyed more than 1,200 senior executives and nonexecutive associates from industries around the world. What we found confirmed our suspicion: Office noise optimization is one of the most important factors in an employee’s preferred work environment. Workers rated “the ability to focus and work without interruptions” as more important than conventional perks like office amenities (e.g., free food, daycare) or personal space. As it turned out, the modern-day workplace’s new design introduced a new problem: noise pollution.

Human beings have a well-adapted sense of hearing, and we are particularly sensitive to certain sounds that might pose a threat—especially dynamic sounds. We cannot turn off this evolutionary survival mechanism. And, as it turns out, the most dynamic sound in the modern office is human speech; we literally cannot help but be distracted by it. Knowing that, we dove into the realm of psychoacoustics— the science of sound perception and our response to sound—in a sponsored effort with Terrapin Bright Green.

Sound levels and sound spectrum are only partially responsible for how we interpret an acoustic experience. Imagine that you are at a cocktail party. You can easily focus on conversations near you, but you have a hard time trying to focus on conversations on the other side of the room. By contrast, if you are in a quiet library, your mind will easily pick up on a conversation happening across the room. At the cocktail party, your mind allows you to focus on the conversation to which you attach the most importance. Without the presence of a closer and more important conversation, though, your mind will naturally focus on the next dynamic noise, which is likely the next conversation. We are unable to block out distracting conversations because we are hardwired to pay attention to them. Although this is a great evolutionary adaptation for outdoor survival, it is not so great in an open-office environment.

In addition to being bad for people, noise pollution is also bad for business. Last year, we partnered with Oxford Economics again and found that millennials are particularly annoyed by office noise. Indeed, people in the noisiest offices were most likely to say they plan to leave their job within the next six months. As competition for talent intensifies, companies that have solved the problem of distracting noise will have the advantage.

Our primordial senses have a strong affinity for the elements of nature; that’s something known as the biophilic hypothesis. Research shows that simply being in the presence of nature-inspired elements can have powerful effects on well-being, creativity and productivity. Yet, despite this innate human desire to connect with nature, we’re inside most of the time. According to the US Environmental Protection Agency (EPA), the average American spends 87 percent of the day indoors and spends nearly as much time in the car (six percent) as outside (seven percent).

Bringing nature inside has long been the ambition of many architects, designers and engineers. In fact, biophilic design is a principle that works to incorporate the benefits of linking nature and humans in the built environment. You can see many examples of this in modern office design, including living walls, natural color tones and patterns, and diffused lighting. In the modern office, biophilic design has primarily been applied to what we can see, but it has omitted the other senses we need to complete the experience.

To explore that point further, let’s do a brief exercise: Close your eyes for a moment and transport yourself to the place where you feel most relaxed, most comfortable and most at peace.

So, what did you see? If you are like most people who participate in this exercise, you were likely outdoors near a lake or on a beach. Now, recall the details. Maybe you heard the sound of a babbling brook or smelled fresh flowers in the air. Wouldn’t it be great to bring some of that to the place where we currently spend all our time? Bringing nature into the office requires a multisensory approach; indeed, the more senses that are engaged, the more believable the experience is to the subconscious mind.

Although biophilia in the open office might be a great conversation starter, does it really have an impact on the creativity and well-being of individuals in a normal office setting? We partnered with True Impact, a neuroscience research firm, to find out. A group of test participants was asked to perform an open essay-writing task in both a controlled environment with traditional office noises and a biophilic office space with the sights and sounds of nature. The participant’s brain reactions were recorded using electroencephalography (EEG) and Heart Rate Variability (HRV). Overall, we found that environments with the sights and sounds of nature abated distractions.

With an improved ability to focus, participants exhibited slightly greater emotional intensity, improved memory performance and better essay-writing abilities, including using a more descriptive style and more rare words. Neural data also showed a significant decrease in cognitive load; that indicates ease of comprehension. The result was an improvement in overall essay quality. This initial research evinces a strong link between the presence of biophilic elements and well-being, creativity and productivity.

So far, all this sounds great. But what does biophilia have to do with distractions in the open office? As it turns out, there is a connection between the sounds of water and how our internal psychoacoustics perceive sound. We learned that natural water sounds—for instance, a stream running through the redwoods or gently crashing waves on the shore—are very effective at masking speech, even when compared to the more traditional method of using artificial broadband noises (such as pink noise). The benefits of these natural sounds are further amplified when tied to a visual counterpart, which provides additional sensory stimulation and a stronger immersion factor.

As veterans in the audio communications industry, we started to explore solutions that could be applied to our own workspaces. First were sound-masking systems that relied on the continuous dispersion of artificial broadband noises (i.e., white or pink noise) to drown out the office cacophony for the entirety of the workday. The reception was mixed. Some associates were tolerant of the artificial noise introduced into the office, whereas others saw it as an intrusive sound that negatively affected their productivity. External research also revealed that prolonged exposure to artificial broadband noises is often associated with an increase in the body’s stress response. Exposing our employees to that was the last thing we wanted to do!

The culmination of all this research has led me to believe one thing: Using the power of nature will enable us to build workplaces around what really matters—the human experience. Using biophilia to solve the greatest threat to the open office is an ambitious idea, but I believe a new era of environmental enterprise technology has arrived. Biophilic technology—nature-inspired sounds and visuals that mitigate office noise and simultaneously optimize employees’ well-being—will become the de-facto solution for creating the productive, highly collaborative workspaces that open-office design was intended to facilitate.

Ultimately, we all have the same mission—namely, to build a peaceful space where collaboration and focus can occur in the same place, at the same time. Biophilic technology is the link that will make that dream a reality.