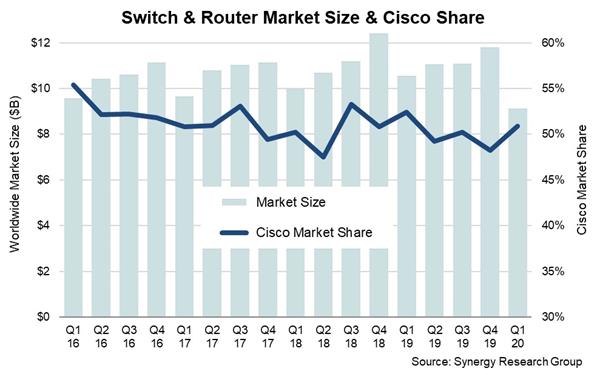 New data from Synergy Research Group shows that vendor revenues from Ethernet switch and router markets fell to a seven-year low in Q1. The first quarter always drops substantially relative to a seasonal peak in Q4, but the sequential decline of 23 percent was unusually sharp. Q1 revenues of $9.1 billion were down 14 percent from the first quarter of 2019 and were the lowest seen since the first quarter of 2013. Ethernet switches, enterprise routers and service provider routers all saw double-digit declines in Q1 relative to 2019.

Cisco’s market share in switches and routers was 51 percent in Q1, meaning that for eight of the last 12 quarters it has been over the 50 percent mark. Across the three main markets, Cisco’s Q1 share was 57 percent for Ethernet switches, 65 percent for enterprise routers and 35 percent for service provider routers. Behind Cisco the ranking of vendors was different in each of the three markets, but in aggregate Cisco is followed by Huawei, Nokia, Juniper, Arista Networks and HPE. Beyond this leading group, other active vendors include Ericsson, Extreme, H3C and ZTE.

Ethernet switching is the largest of the three segments accounting for 62 percent of the total Q1 market. While GbE switches remain the largest segment in both fixed and modular Ethernet switches, the most notable feature of the market is the rapid deployment of 100 GbE and 25 GbE fixed switches. Both of these segments actually grew in the first quarter. In Q1, revenues from enterprise routers were down 15 percent from 2019, but on a trailing 12-month basis the market still grew thanks to strong numbers in the previous three quarters. Service Provider routers saw the biggest decline in the first quarter, down 19 percent from 2019. In Q1, North America remained the biggest region accounting for almost 40 percent of worldwide revenues, followed by APAC, EMEA and Latin America. In aggregate across all switch and router segments, year-on-year revenue declines were broadly similar across the major regions.

“In a market that is usually characterized by relative stability and predictability, the first quarter represented a sharp change from the norm, clearly as a result of COVID-19. In a pre-pandemic world we’d have expected total vendor revenues from switches and routers to have been a billion dollars higher that what we actually saw,” John Dinsdale, a Chief Analyst at Synergy Research Group, said. “On balance the Q1 hit was driven more by supply chain issues rather than by soft demand. We’d expect supply chain problems to be resolved reasonably quickly, but demand is a different story. On the service provider side demand remains robust as network traffic continues to grow, but enterprise demand will be a much spottier picture and some sectors will take several months before returning to some form of normality.”