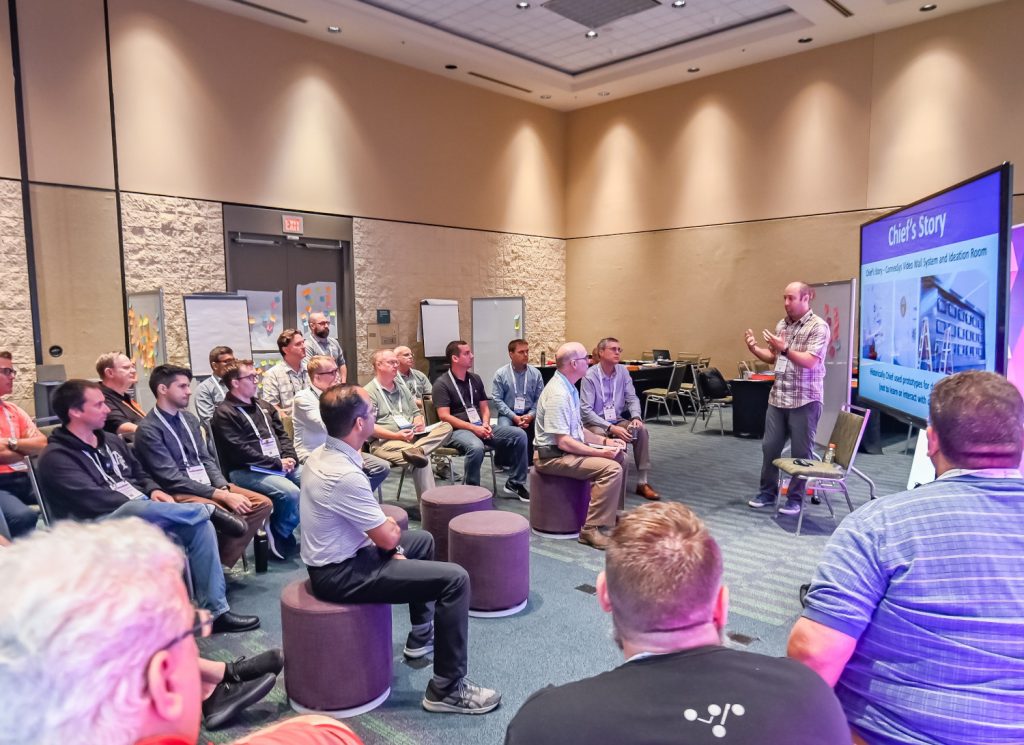 You—the person reading these words—are a lifelong learner. I know that because here you are, reading Sound & Communications, deepening your understanding of the industry of which you’re a part. You’re also in great company. The AV industry is full of people like you, as evidenced by the more than 12,000 Certified Technology Specialist (CTS) holders or the 94 percent of you who say that staying up to date on industry trends is one of the main reasons you come to the InfoComm show. Clearly, learning is important to you.

That said: Do you hate going to class? If so, you’re not alone! Although learning about trends and products are the top two reasons people cite for attending the InfoComm show, only about 10 percent of attendees participate in formal training while there. That makes perfect sense, as there’s plenty to be learned on the show floor. There, you have opportunities to examine products and systems in person, and then talk directly with the experts staffing the booths. Here’s the thing, though: There’s a big potential missed opportunity. What about all the other experts, who are completely enveloping you at all times at the show? That is, what about the army of peers, competitors and potential partners at attending the trade show alongside you? If you’re not going to class, are you learning anything from them?

Maybe you are. If you’re outgoing, persistent or lucky, you’ll find yourself at the right networking reception, standing next to the right people, at the right time, and you’ll connect over a shared challenge. You might even learn something from the different ways in which you approached it. But, if you go to class, intentionally seeking out a cohort of fellow learners determined to tackle the same questions as you are…well…in all honesty, you might fare no better. Sure, you’ll gain insights from the one to five people who wear microphones. But what about the 100 people sitting around you? So often, in lectures or panels, each attendee is an island. People are mere inches away from each other, but they’re isolated by the lighting, the orientation of the seats and the implied focus on the front of the room.

Our average session attendee has more than 15 years’ experience in the AV industry. If you’re sitting silently in a room with 100 of them, you’re missing out on a millennium and a half of expertise!

And that’s the challenge. Every year, we bring tens of thousands of AV experts together under one roof, all of them committed to learning more about their industry. How do we facilitate them getting the maximum possible value out of attending by making sure they can leverage not just our exhibitors and speakers as knowledge resources, but also each other? That, my friends, is an AV design challenge. I’m turning to you—the vast army of lifelong-learning AV experts—to help solve it.

To be clear, this isn’t only an AV design challenge; it’s also an event-planning challenge, a pedagogy challenge and a human-nature challenge. We have to attack it from multiple vectors, changing the kinds of sessions we program and the expectations for our speakers and attendees. Changing only the content is not enough, though. To transform an experience, you also have to change the space and the technology.

For InfoComm 2019, we introduced a handful of new room designs for our sessions, two of which were specifically intended to address this challenge. Internally, we referred to the designs as the “peer-to-peer space” and the “roundtable space.” These rooms were intended to serve different, but related, briefs.

The peer-to-peer space was intended to support small groups of people talking, working or studying together. We wanted a facilitator to have the ability to address the entire room to initiate and facilitate activities, but we wanted all other activities to take place on an interpersonal level. In the interest of supporting this, the seating areas were small and spread out. We used different lighting presets for three different types of tasks that took place in this space: 1) studying, 2) discussion, and 3) drinks and networking. The direct-view display was intended to support the studying task. The idea was that, on demand, one of the AVIXA staff instructors circulating through the study space could bring up a presentation and quickly guide a group of people wrestling with the same topic through a lesson.

This room functioned nearly exactly as it was designed to. People engaged in rich, active networking, studying and discussion. I’m not saying that the room made them do this, but it presented no barriers. The small, widely spaced seating areas invited people to congregate in small groups. The comfortable furniture and appropriate task lighting made the space feel inviting. The sound reinforcement made it easy to facilitate activities within the space. The one element that went unused was the display. Once people had settled into their nooks, they weren’t so easy to dislodge; they preferred to review concepts using the portable whiteboards, written references and their handheld devices. This was a space that removed barriers between people, but that offered just enough supporting technology to give them the environment and tools necessary to learn from each other.

The roundtable space was intended for larger group discussions—a whole roomful of people having a lively debate. The speakers/facilitators would be on the same level as the other participants, rather than being behind a lectern or on a stage. A couple of throwable microphones would ensure everyone had a voice. Originally, we designed it completely in the round, with everyone facing each other in a circle. We had a variety of seating and floor lamps throughout the room to provide soft, even illumination. In essence, we were hoping to create the living room for the AV industry’s family meeting. In later design iterations, we reverted to a semicircle so that the facilitators could use slides and images to help frame the discussion. We also dramatically reduced the amount of soft seating because it seemed wasteful. It did look beautiful in the design renderings, but we weren’t confident it was contributing substantively to our design intent.

Adding the display reintroduced the impression of there being a front and back of the room. That was reinforced by the single row of soft seating that remained in place. Those in the front row seemed “onstage,” whereas everyone behind them seemed like the audience. We had accidentally created a new barrier between the front row and the ranks behind them.

I’m not saying the room “didn’t work”—in fact, sessions that took place there were, on average, the highest rated at the show. You experts…you lifelong learners…really benefit from talking directly to one another. Anecdotally, though, the facilitators who used this space reported that it resisted its intent. Although it was easy to draw in the front row, those in the back seemed almost hesitant to interrupt.

The beautiful thing about designs is that they’re made to be modified. I suspect that, if we integrated the roundtable display into the backdrop, thereby allowing it to “disappear” when not in use, we could recapture the sense of a circle of equals. Having seats clustered around their own designated microphone, rather than making people ask to have a mic passed to them, would reinforce the impression that everyone is expected to speak. Having either more variety or more uniformity of seating might eliminate the “onstage/off-stage” perception.

You probably have a better idea, though—and that’s the whole point. As an industry, our collective knowledge dwarfs any one individual’s own. If only we could access it….

If you’d like to share any of that collective knowledge with me, I am ready to learn.