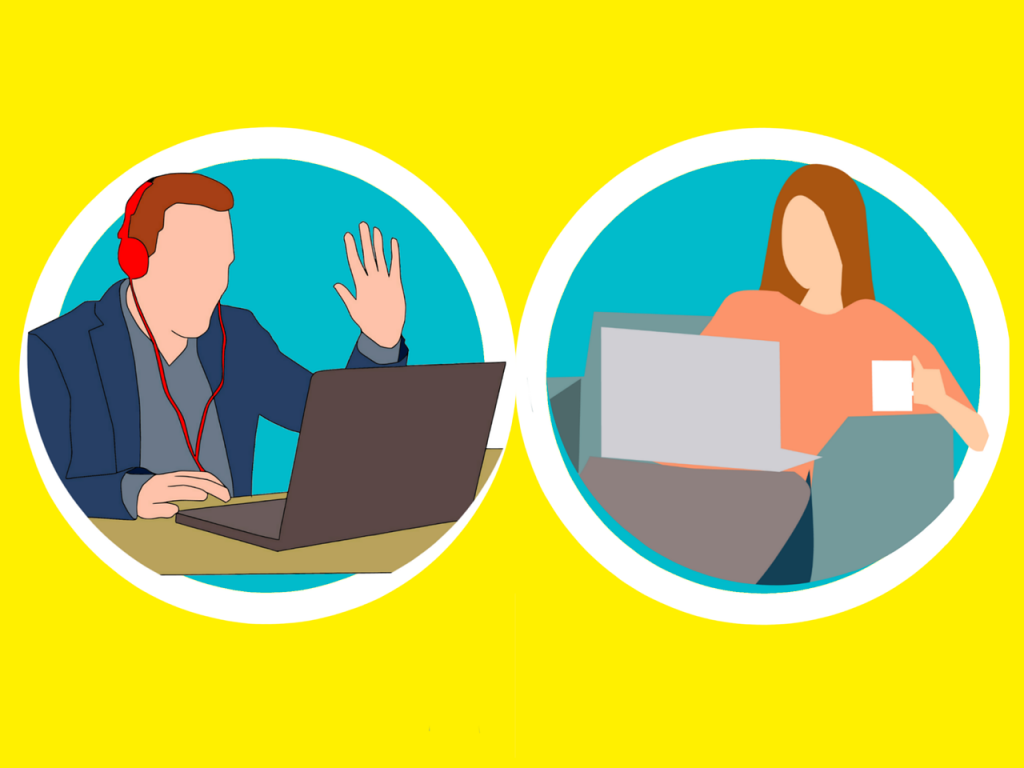 Re-examining this technology and its new relationship with smart work.

Among the numerous takeaways we in communications technology should draw from the novel coronavirus (COVID-19) crisis, one of the most important is the fact that videoconferencing isn’t going away anytime soon. Really, it’s just the opposite; as lockdowns started and quarantines were set in place, video calls quickly became symbolic of meetings organized outside the office, to the point that they’re now inseparable from the concept of remote work itself.

This is all to say that the increased adoption of video we saw is far more than just a temporary popularity bump thanks to COVID-19. If anything, video calls have nowhere to go but up, so long as they’re implemented wisely.

I believe we can say this so definitively just by considering the rationale behind video’s increased adoption. Although it was lockdowns that spurred the mass move to video, it’s too simplistic to say they were the sole reason for its increased use. Actually, the best explanation for the sudden, near-total shift to videoconferencing is the fact that quarantines forced businesses to adopt smart working capabilities on a vast scale. This is an important distinction to make because, as of now, companies won’t need quarantine as a reason to continue using videoconferences; all they’ll actually need is to keep making use of smart work.

And make no mistake: smart work will stick around, further lockdowns or no. Between the increased flexibility and freedom that it gives workers and the increased productivity and business savings that it brings employers, smart work is a model that only makes sense for businesses to continue implementing. As such, we can safely surmise that video is going to stick around in this particular niche for some time to come.

However, as assured as we can be that video is going to enjoy lasting popularity in business, the caveat is that value in videoconferencing can’t be achieved by using it as standalone technology. Rather, the power of video is in its potential for convergence with other smart work-enabling technologies—in short, its ability to be part of a unified solution for smart work communications. To figure out what videoconferencing will look in the future, then, we need to look not at video tools themselves, but at what smart workers need to operate in a remote capacity.

In re-conceptualizing video after COVID-19, we should begin by considering that the way the average office staff conceives of video calls has changed. Before, we typically looked at video as a way of linking offices to other offices, or organizations to other organizations. Now, that focus has shifted to emphasizing how video can link teams of remote-working employees.

However, just because video is now primarily used to connect remote employees doesn’t guarantee it will be a useful tool for them. In fact, it’s not even a full guarantee that video will continue to see meaningful use from smart workers. After all, simply requiring smart workers to install a given videoconferencing app and tuning into a call every week won’t encourage active use. Sure, this approach can let a company “brute force” its way to creating familiarity with the application at a basic level. But if the platform isn’t quick to start up, intuitive to use, and unobtrusive when left open, it’s unlikely that the average end user will interact with it beyond what’s required. What’s more, if the system uses a cumbersome security interface like a VPN—which is complicated to set up, creates latency in communications, and isn’t even fully effective at safeguarding systems—that requirement will only further deter usage, as it makes connecting over video all the more burdensome.

These are all issues because, if users are only making minimal use of a platform, businesses aren’t getting the maximum possible value out of it: employees aren’t interacting as much as they could be, morale isn’t as high as it could be, and, even in mandated meetings, engagement isn’t as high as it could be. And should a video platform fail to encourage utilization to this degree, it means that you’re missing out on the tremendous benefits the concept of videoconferencing stands to offer. Used to its fullest, video is a pivotal way for organizations to continue to drive their corporate culture and maintain a professional collaborative atmosphere while implementing smart work, which makes adoption and usage all the more critical.

Simply put, a system that doesn’t encourage active engagement means your smart working team is missing out. That, in turn, creates even more reason to look for user-friendly design—and, in particular, unified design—for video moving forward.

Some months ago, before COVID-19, I wrote that the most effective interfaces for videoconferencing would be achieved through Unified Communications: to encourage use, I said, we should encourage familiarity with the technology, which could be done most easily through streamlined, user-focused design with unobstructive security and integrated additional features (such as messaging, file sharing, voice calls and so on). I contend that this is the same approach that will create the most effective videoconferencing platform for smart workers. The reason is one part convenience, one part familiarity: on the one hand, putting a videoconferencing tool alongside those other communications features will make it easier to start up a conference, as, instead of starting up a separate app, smart workers can just press a button within their main communications interface to initiate a call. On the other hand, by having the option for video available right where all other communications happen, smart workers will see video calls as a possible tool for regular communication, not simply specialized technology they use once a week at their boss’s request but never touch otherwise.

By emphasizing convergence, video achieves greater value for the smart worker not only by offering convenience and familiarity but also, more importantly, by focusing on how video can become more useful for remote-working usage in particular. And given the increased importance of smart work in business today, this emphasis will only become more important in designing videoconferencing solutions moving forward.

To again call back to the last time I discussed videoconferencing, a concept I didn’t speak much on was hardware: what is it that video call solutions should actually run on? This question has become all the more important as we consider videoconferencing in the context of smart work, since we now need video chats to function while employees are out and about.

The most obvious (and, incidentally, most correct) answer is to just have video solutions run on employees’ existing hardware, or even any devices they have at home—that is, a “bring your own device” (BYOD) approach. What works about this methodology is it allows workers to communicate with their team seamlessly. If employees have to rush home for whatever reason, a BYOD solution lets them instantly collaborate with coworkers even if they left their work devices at the office. Even better is if the solution works right in the browser through WebRTC, as such a setup means smart-working employees don’t even have to bother with downloads or installations to get up and running.

However, if we emphasize flexible technology, it raises a question: What do you do with fixed videoconferencing stations? Is there no place for them now that the focus has shifted to working outside the office?

The answer is, not exactly. Smart working doesn’t exclude the possibility of working within the office—it just allows work to happen outside office space, as employees need. So long as the office is an available space, they’ll no doubt go back to it from time to time, even with other locations being made available. That being the case, it’s worth giving offices a means to collaborate and meet with smart working employees through video. However, in these setups, the value of dedicated video hardware won’t be in just connecting offices, but also in connecting on-the-go employees. In a sense, we could even say there are increased benefits in having stationary videoconferencing units, so long as it fits a business’s particular needs.

But, again, what’s pivotal to video hardware being used effectively is that it is simple to use and has more functionality than just video alone, as well as that it is seamlessly connected with the entirety of the videoconferencing solution. As much as COVID-19 has made video calls a popular technology, it’s these principles that will ensure that video remains popular.

While certainly no one could have predicted the massive impact COVID-19 has had on technology, it’s still safe to say that this surge in videoconferencing has been a long time coming. As communications technology, video calls have tremendous potential to create and maintain connections. But I’d again stress that this potential is most thoroughly realized when it’s applied within the space of smart working, as, in this context, video easily allows any space on earth to become a workspace.

Of course, this investment is only going to see a good return if the video system is approachable enough to encourage familiarity. Again, this is so vital because complexity will inevitably be what kills usage of a system. Working outside of the office, there’s less room for managers to directly control what applications employees use or don’t use in their work. So, the only practical way to get smart working users onto a videoconference is to ensure that the video call system is intuitive and simple to use.

Going back to within the office, a similar principle holds true: To see continued use, standalone video call units will have to work in tandem with those employees who are calling in from outside the office, directly linking up to their streamlined, WebRTC-powered system. Because it is now and will continue to be the support of smart work that brings value to videoconference setups; both within the office and outside of it, there has to be this particular focus regarding the system’s use and capabilities in order for businesses to get the most out of the technology.

If the biggest thing holding back video calls a few months ago was a lack of attention, today, the technology’s biggest obstacle is a lack of convergence. Sure, standalone apps have seen popularity amid the scramble for smart working setups—but you don’t want to count on that disparate approach to tech remaining the norm once the dust settles. As businesses take the time to examine what end users really want out of videoconferencing—and, in fact, out of smart working as a whole—they’re going to find that it’s increased convergence that will help them get the most out of the smart working model that came crashing through their doors.