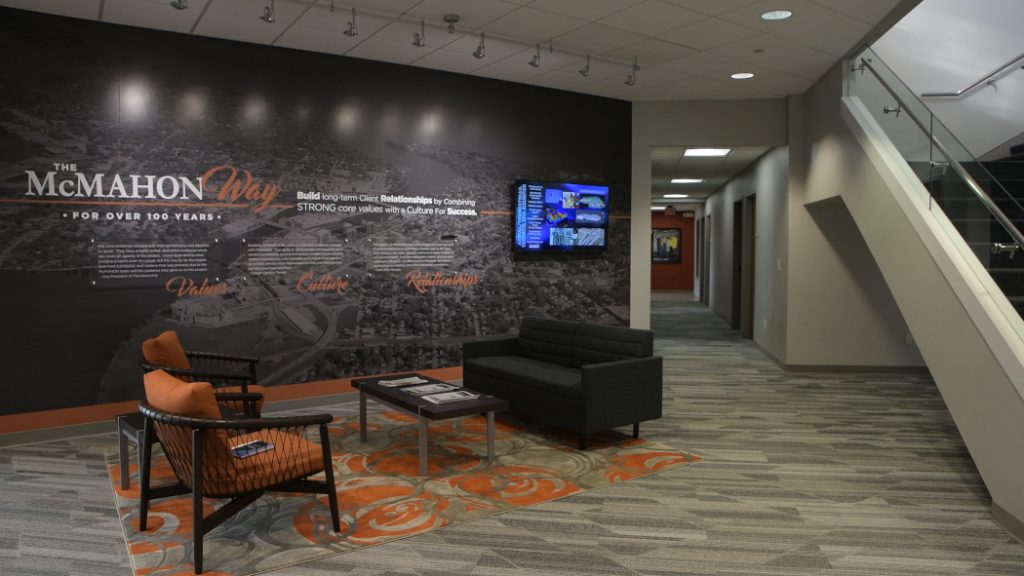 The McMahon Group builds big. An examination of the architectural and engineering firm’s website illustrates its work on large-scale projects, which range from expansive park pavilions and utility facilities for municipal and county agencies to industrial manufacturing centers and transportation-infrastructure construction, as well as the repair of roads and bridges. Those projects seem to be on a similar order of magnitude as the 110-year-old company’s recent enhancement of its AV infrastructure, which included the implementation of advanced videoconferencing capabilities, at its newly expanded headquarters in Neenah WI, southwest of Green Bay WI.

“We’ve never really had a formal technology group, and, in the past, we’ve just made do,” McMahon’s IT Administrator and resident technical advisor, John Davis, said. He worked closely with Sam Tijan, the company’s building information modeling (BIM) lead and project manager, on the new AV plan. Davis said the company had implemented AV technology unevenly in general over decades; employees at the company had used an ad-hoc and largely undefined range of meeting solutions, ranging from simple conference calls to some individual smartphone apps. The planned building expansion presented an ideal opportunity to commit to a comprehensive and consistent meeting and collaboration strategy.

Davis explained that using a locally based AV integrator is almost a tradition in Wisconsin, where companies tend to want to foster strong links to the community. The fact that Enterprise Systems Group (ESG), barely a 15-mile drive away in Little Chute WI, already had much of the technology in which McMahon was interested installed and working in its own offices was a tremendous help, he added.

“At the top of our list was ease of use,” Davis remarked, “because we knew we wouldn’t get good acceptance of new videoconferencing technology throughout the entire company if we didn’t make it easy to access. It had to be a one- or two-button process. We could see that in action, as well as the clarity of the video and the quality of the audio, at ESG’s offices. That helped us make some key technology decisions.”

Having a client with a good sense of what they want from meeting and conference AV is a rare pleasure, Brad McPeake, AV Systems Project Manager at ESG, said. “They had a very good idea of what they wanted to accomplish and what each space was supposed to do,” he affirmed. New for the client, he added, were the videoconferencing elements. In this case, the system centers on Polycom’s RealPresence Group 500 platform coupled with Polycom’s EagleEye IV videoconference camera and Polycom ceiling microphones. (The exception is the largest of the meeting spaces, in which a Shure MXA910 ceiling-array microphone system was installed.)

“The important point was that the videoconferencing had to be very easy to use—able to be accessed by anyone at the company who needed to use it with just the push of a button,” McPeake emphasized. That was accomplished, he continued, by pairing the videoconferencing system with Crestron’s CP3 control system in the largest room and the company’s RMC3 room media controllers for the other spaces, with access via Crestron TSW-1060 touchscreens programmed by ESG technicians.

Visitors to the McMahon Group’s offices are greeted by a graphics-covered wall that outlines the company’s century-plus history. The wall centers on a Samsung 55-inch display that plays a slideshow of photos from the company’s archives and portfolios, stored locally on a thumb drive. Six additional digital signage displays—the same make and model used throughout the installation’s huddle rooms and areas—mark the boundaries of various departments and subsidiaries within the newly expanded headquarters building, telling each one’s specific story. “It has a kind of cool museum feel to it,” McPeake enthused.

McPeake pointed to the Team Room as the project’s centerpiece. (Each space is named, providing some immediate historical or emotional connection for McMahon’s employees. Names range from the flagship room’s utilitarian moniker to more personal names, such as 1909 and Viktory for two of the smaller conference rooms. Those, respectively, are named for the company’s founding year and a longtime employee’s nickname.) The Team Room can be subdivided into three separate areas. When it’s in a single-room configuration, six rows of long tables face a wall centered on a 165-inch-diagonal Planar Clarity Matrix G2 3×3 LCD videowall, flanked by a pair of Sharp PN-L703B 70-inch interactive monitors.

When room dividers are pulled manually into place to create three distinct spaces, the interactive monitors become the subspaces’ main displays. A combination of sensors and specifically programmed macros in the Crestron processor toggle the side displays between extensions of the main Planar wall and individually operated screens, as well as reconfiguring the loudspeaker arrays.

“The displays had to be as crisp and sharp as possible, because they’re used for very precise CAD drawings and renderings, as well as high-definition images,” McPeake explained. “So, we had to go with a 4K-capable display wall.” He added that, in choosing the videowall, it wasn’t lost on the project leaders that the Team Room is the flagship room in the building’s AV infrastructure—the largest room, and the first one that visitors encounter after the lobby. Therefore, decision-makers recognized that, to some extent, it has a marketing purpose, as well. “It’s the first thing you see when you walk through the glass doors, and it makes a very good impression on visitors,” McPeake affirmed.

The Team Room’s video monitoring and audio required a highly specific solution. McPeake pointed out that, although it’s a large space when configured as a single room, it has an average-height ceiling; therefore, sight lines to the video had to be kept in mind. A 55-inch Samsung display is hung from a pipe-type mount to act as a confidence monitor for presenters at the front of the room. “That way, the presenter doesn’t have to turn around to see what’s on the videowall,” he explained. “Having a confidence monitor really helps with audience engagement.” He continued, “Usually, you’d see a confidence monitor placed at floor level, but that means the presenter tends to look down and away from the audience. We keep eyes looking out into the room this way.”

Audio is provided by a Shure MXA910 ceiling-array microphone system, whose DSP aims up to eight steerable beams and incorporates microphone attributes such as lobe configuration, automatic mix settings and preset templates to capture participant audio from overhead. That further reduces sightline issues, while also eliminating the need to pass microphones around. (Nevertheless, a Shure QLXD24/ SM58-G50 wireless handheld microphone is also part of the room’s kit, along with a Shure podium microphone and a Shure wireless lavalier microphone.) Audio is reproduced through 16 QSC AD-C81Tw eight-inch ceiling speakers, powered by a pair of QSC CXD4.2Q amplifiers and managed by a QSC Core 110f audio processor.

“Things like the way we positioned the confidence monitor and how the audio system is integrated into the room…it’s all designed to easily establish and maintain engagement between the presenters and the audience,” McPeake stressed. An average-height ceiling and carpeted floors meant that room acoustics were not an issue.

In addition to the Team Room being the facility’s flagship, it is its AV template. Each of the successive meeting and collaboration rooms and spaces in the new headquarters essentially uses the same AV platforms and products, configured for each space’s needs. There are three videoconference rooms: the aforementioned 1909 and Viktory, as well as Leaders. Samsung, Polycom, Crestron and QSC systems comprise the AV and meeting platforms in each. Leaders is the largest of the three rooms, and it had to have its drop-down Polycom room microphone snaked through an existing soffit in the ceiling—something that McPeake said required a technician to crawl through the narrow opening. That was, however, the only real cabling challenge on the project; virtually all the wiring for the AV systems was done by a subcontractor. Keeping cabling out of view was important, McPeake commented. “Leaders is really the executive conference room, so we wanted to keep any AV-related clutter to an absolute minimum.”

The huddle rooms—Collaboration, Innovation and Vision—and the two open huddle spaces—Collaboration and Architectural—again utilize most of the same AV technology platforms, although audio comes only from the speakers built into the single Samsung 55-inch display mounted on the wall of each space. Like all the other rooms, the huddle areas rely heavily on Crestron’s AM-101 wireless presentation gateway, along with HDMI inputs, to let users get content onto the screens. Part of Crestron’s AirMedia platform, the system initially accommodated only Android OS, but, McPeake explained, new software will let iOS onto the wireless system, as well.

The huddle areas also underscore how that kind of collaborative interaction affects corporate IT. McPeake said McMahon’s IT team essentially created a “tunnel” within the company’s virtual LAN (VLAN) that allows inbound wireless input onto the network, but that keeps it isolated from other corporate data traffic. “It’s basically a separate and very secure LAN within their own network,” he elaborated. “Their IT people did that in consultation with us. We told them what the Crestron AirMedia system required, they made the adjustments on their network, and we both tested it as we went along.”

Keeping An Eye On Systems

There are two C-level offices, for McMahon’s CEO and CFO; each has a desk and a small meeting area. Again, the rooms’ technology mirrors that of the other spaces. One difference, however, is that the video display is positioned on an articulating Crimson AV A55 mount, so it can be adjusted for the number of people in the room during videoconferences. “An important aspect of these offices is that their users are able to join in with videoconferences in any other space in the building, without having to leave the office,” McPeake related.

One other capability ties together all the meeting spaces: ESG is providing remote monitoring of all the AV systems, using its proprietary (i)View WDA network-monitoring and remote-access devices in each space. It’s a comprehensive and anticipatory system, McPeake said, able not only to note any system or component failures that occur, but also to monitor conditions such as room temperature. (For example, an HVAC shutdown or vent blockage could precipitate a heat-related AV unit failure.) “We’ll get a warning over our network, and we can dispatch our on-call technician to take care of it,” he added. The system also lets ESG reprogram any of the DSPs onsite remotely, if and when necessary.

The platforms that each entity works with are different, but, McPeake stated, this customer understood the concepts better than most. “Sometimes, when you’re talking about the systems, you just get back a blank stare; that wasn’t the case here,” he affirmed. “They understood what the technology could do, and our job was to make that technology transparent and simple for them to use. The communication between us was great from the start.”

Previous ArticletestNext ArticleJuszkiewicz To Step Down As CEO; Gibson To Emerge From Bankruptcy By October