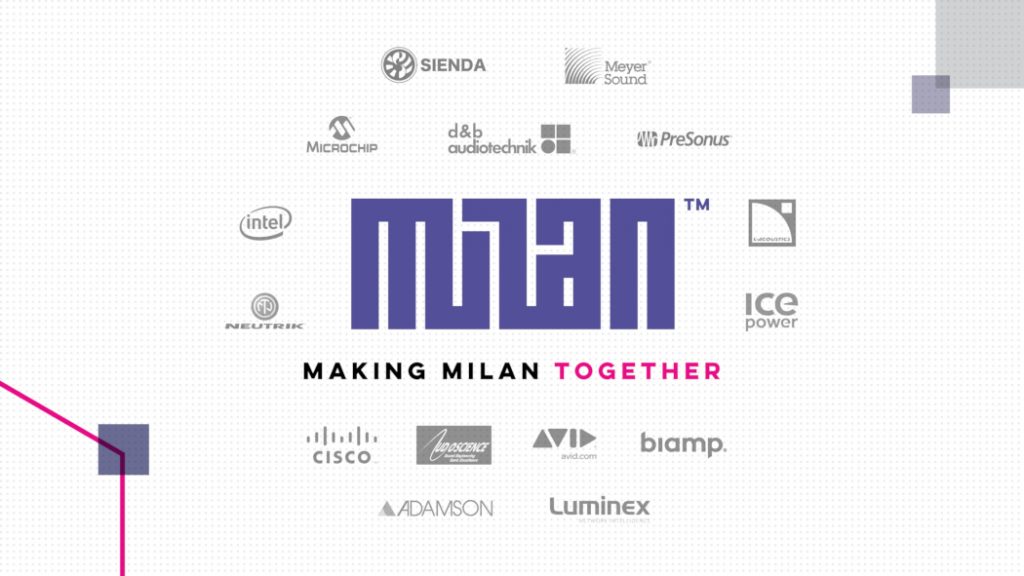 Manufacturers under the umbrella of Avnu Alliance created Milan to address the commercial AV industry’s need for a fully realized networking solution.

The commercial AV market is constantly evolving as products and systems become increasingly complex, all while expectations grow for a top-of-the-line experience. To add to that complexity, the market has unique requirements for moving time-sensitive video, audio and data across the network, which has become paramount as AV increasingly resides on the network. End users and engineers, who are at the heart of this industry, are experiencing burnout from system complexity, and they’re disappointed by a lack of functionality.

Now, complete systems and interoperability between devices have become key elements of the AV industry’s value proposition, with a decreased emphasis on isolated, individual products and a greater focus on an integrated system. The network, which provides connectivity for individual components to work together, now becomes the grid that defines system architectures. The future of AV requires more than just individual products and components connecting together, however; what it truly requires are the value and functionality that can only come from deep systems integration. Today, however, planning and handling of networks requires extensive IT management skills. That’s not what most audio and systems engineers signed up for.

When it comes to networked audio platforms, the professional media industry’s requirements must be taken into account. At the most basic level, guaranteed delivery of high-quality audio, not subject to dropouts or latency, is required. However, the industry must effectuate this using a long-term, stable and viable platform. When making decisions about networking infrastructure, end users have to be confident that they’ve chosen an enduring standard and a network that can support them as their media and data needs scale—suiting them today, tomorrow and even years into the future.

Many of today’s solutions have been knit together using proprietary networking solutions, which require extensive design, installation and support work from industry professionals, and which create risky propositions whose long-term viability is not guaranteed. As the network has evolved and continued to scale, so, too, has the opportunity for the industry. The network should not be a competitive market on its own, nor should it be a bottleneck to innovation.

We, the manufacturer community, have to be in the driver’s seat. We have to create, manage and advocate for the change we want to see in the commercial AV industry, and we must bring to life the vision of a complete media network—one that is easy to use, futureproof, open for creativity and scalable across markets, and one that represents a convergence of audio, video and control. So, where do we begin?

Manufacturers have to begin with owning the network as the foundation for their value proposition and make it a priority in all channels within the business, both external and internal. Manufacturers also must work with other companies, openly sharing information on networked products and collaborating on open standards to help ensure greater network interoperability.

The network should simply be easy, reliable and futureproof. It must be open for creativity to enable the creation of valuable products. And, today, we are seeing a convergence of audio, video and control on the same network, scaled across applications and markets.

The vision for the future of networking is encompassing the ease of the analog XLR connector and transforming it into full media and data interoperability. One resource to help manufacturers ensure a seamless, futureproof network is to use Ethernet and Audio Video Bridging (AVB).

AVB And The New Capabilities Of Ethernet

Despite rapidly growing technological advancements, most modern networked AV systems are based on 40-year-old Ethernet technology that is defined by IEEE standards. However, legacy Ethernet is not designed for real-time traffic, and it does not behave in a deterministic manner. That means data can be lost, networks can congest and the arrival time for a packet cannot be precisely determined.

The IEEE AVB standards are an enhancement to Ethernet itself, expanding upon Ethernet capabilities. Key characteristics include stream reservation, which helps AVB switches reserve the bandwidth for a stream of media signals in a way that it cannot be affected by other traffic, and synchronization, which ensures control data and media signals can use one connection to a device. The setup is such that up to 75 percent of bandwidth is available for media streams, whereas 25 percent always remains for other data traffic.

When AVB is implemented, audio, video and data can coexist on one network, with one cable connection, without causing interference between the data packets. Another new feature in AVB Ethernet is that timing is built into the network itself. AVB networks are self-contained, synchronized structures. The timing is baked into the network hardware, so it is far more precise than any software-based synchronization, such as Precision Time Protocol (PTP). Streams in AVB systems use the network time, together with the stream-reservation mechanism, to predetermine their arrival time at the receiver; media clocking is independent from the network time, which enables multiple media-clock domains to coexist on a single network.

In an AVB network, each stream can carry its own clock. The network provides a structure for media signals to be interconnected simply with cables, while also allowing for configuration of clock domains in exactly the way it is desired in a system. This allows AVB to be utilized for many signals—from audio, to video, to data—scaling with available network bandwidth. In the near future, we look forward to seeing video manufacturers implementing uncompressed video transport over AVB and adding it into Milan specifications.

Despite its many benefits, AVB adoption has been slow. Reasons include that other solutions were easier to implement, there were limited switches available and end users had a difficult time finding the value proposition for implementing AVB.

AVB is a technically superior network technology, but it is not a solution. That’s because AVB makes up the network layer, but it doesn’t define implementation strategy and end-to-end interoperability in real-world applications. The result is that, to this point, AVB devices have lacked application-layer interoperability because there were no rules for stream formats, media-clock sources, redundancy and software control of the network. It was a little like having all the structural building blocks and technical requirements for easy multi-way communication, but not speaking the same language.

This application-layer interoperability was what was lacking with AVB…until now.

This is where the Milan solution enters. A user-driven protocol for professional media, it was thoughtfully designed and developed, it’s built on open standards, and it offers the guarantee that all Milan devices will work together at a new level of convenience, reliability and functionality.

Milan builds on the technical benefits of the enduring open AVB standard, such as time synchronization and guaranteed quality of service (QoS), as well as risk-free coexistence of control and media data on one network. It provides defined device requirements at both the network and the application layer for media streams, formats, clocking and redundancy. The Milan protocol will enable fully realized, standards-based networks for professional media with ensured reliability and determinism.

Milan works with Avnu-certified switches and guarantees the interoperability of the network ecosystem by adding essential agreements about the implementation of AVB technology, including requirements for compatible and compliant media formats, media clocking, redundancy and controller software. It also ensures those requirements are implemented correctly through compliance testing and certification of end devices. Milan offers the promise of an AV network that is guaranteed, open, futureproof and easy to use.

At InfoComm 2018, we, as commercial AV manufacturers working together under the umbrella of the Avnu Alliance, introduced Milan to the market. The industry response was positive, with many end users, manufacturers, vendors and others excited to see major manufacturers—companies that are traditionally regarded as competitors—working together to create something important for the market. Collaboration of this sort among competitors to develop Milan couldn’t have occurred without the framework provided by the Avnu Alliance. Membership in Avnu gives manufacturers a collective voice to define market requirements to meet the unique development needs for a fully realized commercial AV network solution.

After InfoComm, the group continued to work behind the scenes so as further to develop Milan and offerings for the market. We released the full suite of specification documents for Milan, representing almost two years’ work from technical workgroup members. Four separate specifications documents make up the Milan Specification Suite, all of them available at avnu.org/ specifications. The first is the Formats specification, which defines three stream format profiles from Milan based on the IEEE 1722-2016 Standard AAF Audio Format. This offers a less complex, more efficient format than others, such as AM824. The second is Media Clocking, which defines the Milan required method for media-clock synchronization. The third, Redundancy, outlines the ways that Milan helps commercial AV devices with AVB be able to endure a number of network failures.

The fourth (and most recent) is the Device Discovery and Control specification. Milan relies on the IEEE 1722.1-2013 Standard for Device Discovery, Connection Management and Control Protocol. This standard is vast, and it allows for many interpretations. With this specification, Milan delivers a clear, defined profile for devices with a small subset of the standard and removes all ambiguity from this subset in order to achieve interoperability at the control layer.

At ISE 2019, Avnu made a series of announcements to show Milan’s momentum and continued growth. We added three new commercial AV members—Adamson Systems Engineering, ICEpower and Sienda Multimedia—to offer new insight and ideas and expand the workgroup of supporting manufacturers. Also, Milan members d&b audiotechnik and Adamson announced new, Milan-ready products at ISE; the products implemented the Milan specifications and they’re ready for certification testing. Luminex announced its Avnu-certified GigaCore switch and showed an interoperability demonstration with other Milan-ready products. L-Acoustics announced the publication of an open-source, free-to-use AVDECC Library that is now fully Milan compatible with the recently published Milan Discovery, Connection & Control Specification for Listeners & Talkers. The open-source library offers a set of tools for controlling AVB and Milan devices using the AVDECC (IEEE1722.1) protocol and for meeting Avnu Milan specifications. These libraries can be implemented on Windows, Linux and macOS using standard development tools. Unit tests and sample programs are also available. The open-source tools are currently available on GitHub.

The Milan public forum and message board was also made public at ISE. It’s meant to encourage collaboration among, provide information to and answer questions from the greater commercial AV community. The forum is free, and it’s open for anyone to join and participate in. There, users will be able to get answers about Milan implementation, specifications, certification and more.

With more members, more expertise and more market leaders contributing to the Milan effort, we’ve begun to gear up to create a new, more streamlined testing and certification program. It will enable companies to move to a solution that will guarantee interoperability on a technically superior, futureproof network; the target launch is this spring. We are thrilled to see AV and IT manufacturers coming together to gain ownership and get in the driver’s seat. We are seeing a strong motivation to collaborate beyond competition and work together to refocus the network debate on true product value, such as functionality, usability, reliability and futureproofing.

For us, Milan is a business requirement. Milan’s purpose is to free us up creatively as manufacturers. We are looking forward to a busy roadmap for this year, with developments that will further enhance Milan’s impact. Manufacturers interested in exploring Milan network implementation should visit www.avnu.org/milan, get in touch by emailing milan@avnu.org or join the Milan forum at milanavcommunity.proboards.com.