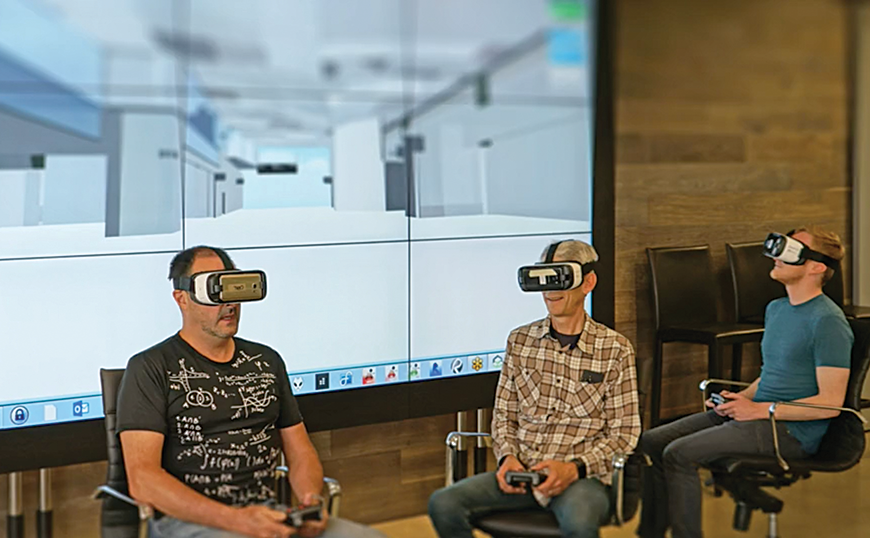 For most people, the mention of virtual reality (VR) conjures up images of VR goggles or users seemingly lost in The Matrix. It’s not hard to understand why, either. A quick internet search for “virtual reality” returns a myriad of photos that portray users with smartphones strapped to their faces, disconnected from the world around them. Although films have traditionally depicted VR as a method by which individuals remove themselves from the world in which they live, the true reality of the virtual world can be quite different. As consumers turn to VR for experiences that this world can’t offer them, some industries, by contrast, are leveraging the technology to assist in the creation of engaging and compelling experiences in the real world.

My colleagues and I first discovered the value of using VR in the design process while developing an overhead paging system for a transportation facility. The architecture of the space was such that the sweeping feature ceilings were difficult to represent on a two-dimensional drawing. Viewing the architecture in VR helped us better understand the shape and finish of the feature ceiling and, ultimately, it led us to consider alternative—and less traditional—methods of covering the space.

Another opportunity to employ VR in the design process presented itself when we designed an audiovisual system for a corporate all-hands space. The space’s constrained open ceiling height, in addition to a plethora of hanging HVAC ducts, lighting fixtures, confidence monitors and pendant speakers, presented a challenge for audience sightlines. Rendering the space in VR enabled us to confirm that all audience members would have acceptable views of both the presenter and the large videowall at the front of the room, unobstructed by the systems suspended from the ceiling.

Increasingly, the audiovisual systems we create today are integrated with surrounding architecture. Countless hours are spent in design and construction to ensure our systems and devices contribute to, rather than detract from, the overall aesthetic of a space. That’s why the value of iterative VR design is more apparent in architecture, engineering and construction (AEC) than in perhaps any other industry. The ability to walk through a full-scale model prior to construction offers the opportunity to acknowledge risks and, if necessary, correct course, as well as explore alternative designs. Until recently, though, VR tools have been too unwieldy and inaccessible to find a home in the workflows of industry professionals.

The introduction of mass-market, VR-ready smartphones over the last few years has accelerated the AEC industry’s adoption of the technology as a tool to aid in the design process. When paired with a VR headset and Bluetooth-enabled game controller, these relatively inexpensive devices allow designers, architects and end users to experience their visions at human scale. The workflow is simple—a Revit model populated with displays, loudspeakers, furniture and more is rendered in VR and loaded onto a smartphone. Power up a controller to move around in the model, insert the smartphone into a VR headset and you’re off to the virtual races.

This lightweight setup has proven invaluable in communicating program ideas and gathering feedback from end users and other members of the design team. The value of using VR to collaborate with the design team is in taking the design off computer screens and construction plans and, instead, allowing stakeholders to experience it for themselves before construction begins. A preliminary design might look great on paper, but seeing it rendered in VR gives the project team a new perspective and, often, starts a discussion about aspects that might not have been previously considered.

One of the most exciting possibilities of VR is to flip that workflow on its head. Instead of creating in the two-dimensional realm and rendering in virtual reality, imagine if we could create in the virtual world and export those models as construction plans. In VR, one could form walls, route conduits, hang speakers and size displays. Then, construction plans could be generated from the coordinated model, reducing the chance of conflicts in the field. That concept is still merely a prospect, given current technology, but it’s driving the development of tomorrow’s VR tools today.

As VR takes a stronger hold in the industry, projects will be even more successful.