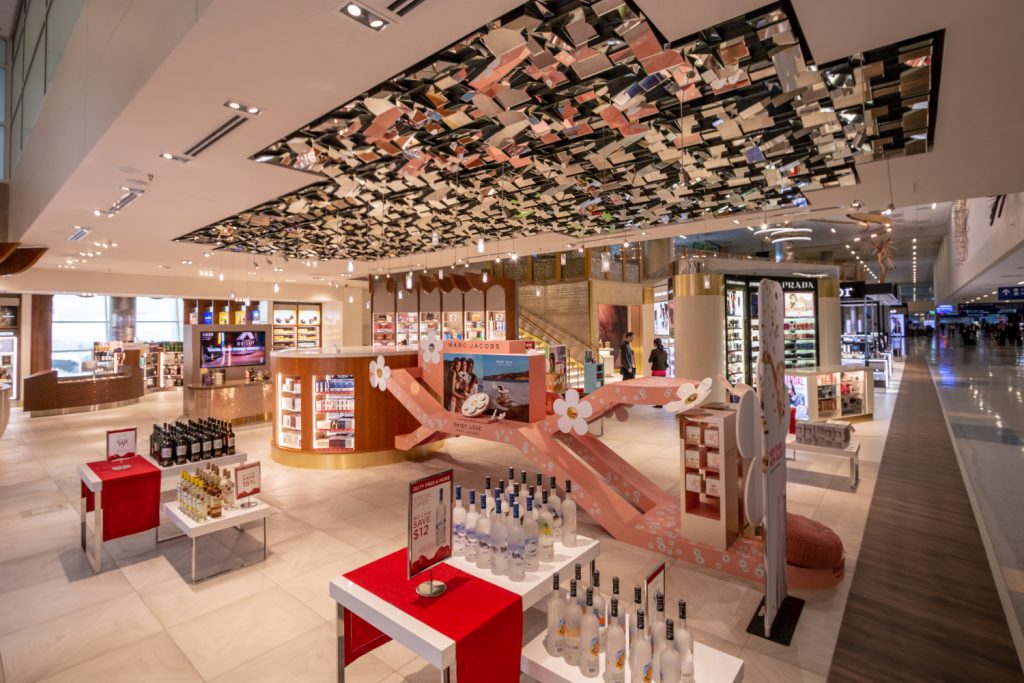 DFW Airport's TRG Duty Free is the largest duty free store in the US. It boasts nearly 17,000 square feet of retail space, as well as a second-floor luxury seating area.

Digital signage is a proven commodity when it comes to attracting shoppers to retail environments. It has the ability to wow customers with flashy video content and high-end technology, effectively creating a high-energy, thoroughly modern environment for today’s experience-obsessed shoppers. And digital signage installations can be even more effective in areas with heavy foot traffic or in locations that cater to captive audiences.

For these reasons, digital signage is a major feature of the TRG Duty Free store at Dallas/Fort Worth’s DFW International Airport. Travelers from around the globe encounter the duty free store just beyond the security checkpoint at DFW’s Terminal D, where they are drawn in by advertisements for tax-free goods sold by several leading brands. The store is in a prime location—the 28-gate Terminal D is the airport’s international terminal, which is capable of serving 32,000 passengers daily, or an annual total of about 11.7 million passengers. And once those passengers make it through security, they aren’t going anywhere until they board their flights, leaving plenty of time for shopping.

The TRG Duty Free store itself has two floors; the first floor is made up of retail stalls that are rented out by vendors, while the second level serves as a luxury seating area for travelers to relax in until their flights are ready to depart.

The TRG Duty Free digital signage system includes several displays placed throughout the store, and it features two impressive, eye-catching set pieces: a 10-foot triangular mast that supports two curved 12’x7′ videowalls that face out into Terminal D’s corridors like billboards, as well as another curved 18’x10.5′ videowall that serves the inside wall of an alcove where marquee products are showcased (the product is placed on a pedestal in the alcove, and the curved display behind it shows video content related to the product).

According to Ford AV Project Manager Sean Kupiec, the client, CBI, wanted to capitalize on the immense amount of foot traffic in Terminal D by wowing travelers with high-end video. “Throughout the whole project, I heard [CBI’s Steve Flory] say that he really wanted the ‘wow factor,’” Kupiec recalled. “The videowalls were used to accomplish that, and the whole point of the video system, both in the room as well as with the two large billboard-mounted videowalls, was purely to draw people in.” He added, “The videowalls in and of themselves were supposed to be the ‘wow factor.’ The content is being sold to advertisers. So the ads that are up there are being paid for by the vendors.”

When it comes to attracting customers to the store, the two billboardmounted 12’x7′ videowalls handle the bulk of the action. The displays are strategically positioned to be visible to travelers as they walk through the corridors of Terminal D on the way to their departure gates. “Anywhere that you stand in the center walkway of Terminal D, you can see these things,” Kupiec described. Each of the 12’x7′ videowalls is made up of 168 four-millimeter-pixel- pitch NanoLumens LED panels.

Although the billboard-style LED walls are likely to be the first video element a traveler sees upon arriving at the duty free store, they were actually one of the last system components installed by Ford AV because of the difficulties involved in mounting such large displays. “Those were definitely one of the last things that went up because they had to work with the architect and go back and forth with them trying to get this thing created in such a way that could actually support the weight of the videowalls,” Kupiec recalled. “Originally, they were just going to build [a support] with steel studs and try and frame it out that way, but due to the weight of the videowalls, they had to reconstruct with structural steel, and then build the cladding around that. So once the structural steel was up, we were able to come in and start putting up the custom brackets for this videowall.”

Designing the curved videowall in the product-showcase area was also not without its challenges. In fact, the client originally had a completely different look in mind for this part of the store.

“They were planning on lining the [alcove] walls with mirrors, and they were going to have a three-foot in diameter, pendant-looking fixture hanging from the ceiling with LEDs wrapped around it,” Kupiec explained, “but the manufacturer that they wanted to go with for the LEDs just simply could not wrap  [LEDs around] that small of a diameter without [the content] looking extremely pixelated, and it just wouldn’t have been the ‘wow factor’ that they were looking for. The [alcove] wasn’t quite big enough to allow the fixture to be the size they wanted it to be. The pixel pitch on it would have just been all skewed, and any content you tried to put up there would have looked horrible. So we, as well as NanoLumens, the manufacturer of the videowalls, worked together and provided a solution that was very reasonably priced as far as cost difference is concerned to go to instead of doing the pendant: We wrapped the [alcove] wall with an LED videowall, replacing those mirrors.” He added, “We drastically changed the effect in that room, I think for the better, and the customer agrees.”

The end result is striking: A product is placed on the pedestal in the center of the product-showcase area, and the curved videowall behind the product, which makes up the interior wall of the alcove, envelops customers in video content related to the product. The content that is displayed on the videowall is programmed manually, so when a new product is featured in the showcase area, the content must be changed accordingly.

Kupiec continued, “The viewable width of this videowall is 216 inches on the inside circumference. There are eight power outlets throughout the videowall. We’ve got nine different individually created frames that were mounted to the wall, and these were custom-made brackets to fit the circumference of the curved wall.” The videowall is made up of 378 fourmillimeter pixel pitch NanoLumens LED panels.

All three NanoLumens videowalls— the two billboard-style displays and the videowall in the alcove—were customdesigned for this project. “The way NanoLumens works is, they have this large back box that gets mounted to a wall, and then you wire in all the ribbon cables to interconnect the individual LED panels, which magnetically attach to this custom metal frame, and you just simply layer these panels onto the frame to create the full videowall,” Kupiec explained.

He added, “There was definitely a back-and-forth where we told them our concept and then they asked us a lot more specifics about the circumference and the materials were going to be mounting on, and then we worked back with them to try and get the exact requirements for power and the location for everything as well. But NanoLumens was great to work with. They had on-site supervision throughout the entire install and commissioning. It really helps the integrator be able to get a videowall up successfully.”

In addition to the two marquee videowalls, the TRG Duty Free store also features two 3×3 Planar Clarity Matrix MX55HDU-L LCD videowalls. “You’ve got two large stairwells that lead up to the seating area, and each of those has a 3×3 Planar videowall [alongside of it],” Kupiec described.

A few of these Planar displays had to be replaced during the course of the project because of water damage. “Above the duty free store there is an Admirals Club, and unfortunately, there was a pipe burst that flooded the upstairs and then leaked down the wall with one of the 3×3 videowalls on it,” Kupiec shared. “So we had to replace three of the screens on there.”

There are also a number of additional displays placed within the various retail stalls. These include a mix of 65-inch Planar EP6514K, 65-inch Sony FWD65Z9D and 10-inch Samsung DB10E-POE displays. There are several owner-furnished displays installed throughout the retail and lounge area, as well, that are used as flight information displays (FIDs).

The NanoLumens and Planar videowalls, as well as the rest of the displays in the store, receive video content from a Navori QL system comprised of a QL professional server running QL Player software, as well as nine Stix 3500 4K digital signage media players. “We’re using Navori media players and then their Navori software to control content,” Kupiec said. “So the server basically talks to all of the players. And the players for the most part are located in a rack, and for some of the smaller displays, they’re located behind the displays.” He added, “What Navori does best is scheduling and recording the number of times specific ads play, which is key for [the duty free store] as they’re selling time on these videowalls.”

All of the Navori QL components live on a dedicated local network that operates independently from the DFW Airport network. In addition, the Planar videowalls have their own video-processing headend that also lives on the local network. The local network uses a Cisco SG300-52 52-port Gigabit managed switch.

Because of the security concerns inherent to such a highprofile public space as an airport, Ford AV took care to ensure that its local network was separate from the DFW Airport’s larger network architecture. “The only internet connection they have is direct lines to the Navori server,” Kupiec said.

In addition to installing the digital signage system for the store, Ford AV was tasked with installing 50 iPads on custom mounts throughout the seating area. These iPads are available for travelers to use while they wait for their flights, and are equipped with interactive apps. They also allow patrons to order online from the TRG Duty Free store’s various vendors (although online orders are subject to applicable taxes and fees).

The digital signage system is not tied to any audio systems; however, Ford AV did install an AtlasIED emergency paging system in the space. “We put speakers throughout, but that was not for this system,” Kupiec shared. “We are the life-safety integrator for the Dallas/Fort Worth Airport as well, and we put in a voice evacuation system which is tied to their fire alarm. So there are speakers throughout the facility, but they’re only for emergency—as well as gate—paging. They have access to that for gate pages and terminal announcements.”

According to Kupiec, all parties involved were satisfied with the completed system, and TRG Duty Free has plenty of ‘wow factor’ to offer DFW airport patrons. “Everyone was very satisfied,” he said. “There have been lots of photoshoots [and] lots of thank yous. The client was very happy with the end result.”

And on Ford AV’s end, the installation proved successful thanks to careful planning and coordination between the various contractors. “We planned it to a T,” Kupiec recalled. “During construction, we had all the conduit ran for us. Cable paths were identified by the time it was ready for us to pull wire, and all of the mounting structure and everything was fairly discussed with NanoLumens, as well as the weight ratings. So everything was smooth and well-thought-out.”