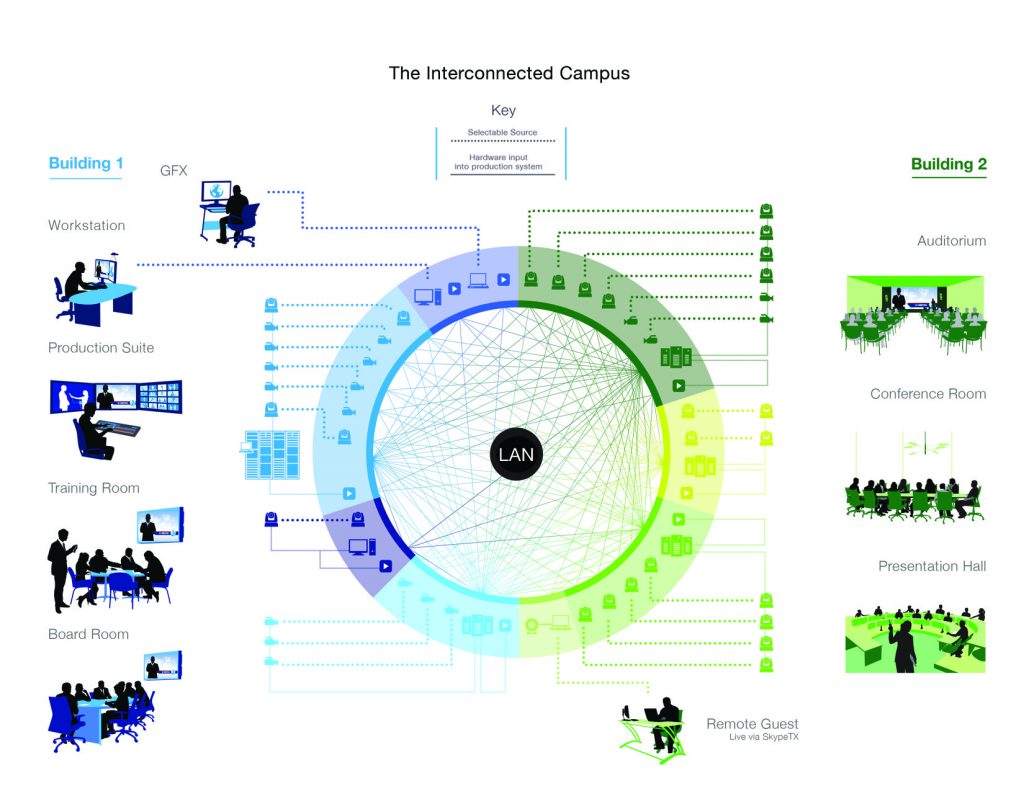 It’s undeniable that the cost of doing business in virtually every market—from brick-and-mortar stores, to e-commerce companies, to corporate offices, to commercial facilities—now includes content creation and rich media. Whether connecting with potential customers and clients, explaining products and services, or demonstrating value and expertise, these elements are no longer luxuries. In fact, the dependence on them is rising every day.

That said, the variance in the processes, systems and workflows being used from enterprise to enterprise is striking. Indeed, in a day and age in which any person with a mobile device can shoot, edit, stream and publish high-quality video content online, it’s just as common for these assets to be put together swiftly by a staffer with a smartphone as for them to be painstakingly produced by a professional crew.

Regardless of the methods used to generate the content, it is all inevitably destined for websites, social media, streaming—channels that rely on networking technology and IP for sharing and consumption. With the increased reliance on the multi-platform online presence to generate awareness, to make connections and to engage in storytelling, it’s only natural that the underlying use of IP as a delivery medium would give way to exploring it as a mechanism for production.

Coincidentally, this comes at a time when manufacturers and developers are proving the merits of IP in content creation—and not only in concept and approach, but also in practical application.

Consider cameras that can deliver live video directly into a system, anywhere in the building, simply by connecting to the network. What about popping open a viewer on your office computer to check on a creative project currently occupying the timeline of your editor’s NLE (non-linear video editor)? What about replacing a simple slide deck and voice with a polished, interactive video presentation for an important proposal or pitch—while using the same, readily accessible communications app?

Those are just a few example scenarios that are possible today using IP-based technology. The potential benefits of IP with respect to video are profuse and far-reaching, and, best of all, they can be realized by organizations of any size, budget or business model.

Think of all of the connected devices you access personally and professionally—computers, smartphones, tablets, AV gear and other equipment— each day. Within that, think about all the various applications with which you interface. With IP, in effect, any technology with software or a screen can be interconnected and in communication with similarly equipped technologies on your network. Now, consider the efficiencies created with regard to time, effort and logistics, as well as the opportunities created by having everything accessible from anywhere you tap into your network infrastructure. Simplicity, flexibility and expansion are words that come to mind—perhaps even more important, though, are the cost savings and freedom.

Let’s briefly examine those two—arguably the most- and least-publicized advantages of transitioning to an IP model. With networking technology becoming increasingly viable for supporting IP workflows to scale, while approaching commodity territory in terms of price point, the cost of entry has never been lower. In fact, it’s by no means an exaggeration to say a company can switch aspects of its current creative process over to IP without having to spend a cent.

Consequently, scalability is also within financial reach. Companies and organizations have become accustomed to purchasing various flavors of purpose-built cabling and corresponding adapters, and maneuvering them strategically within their infrastructure; by contrast, the universal language that is IP, and the software-based compatibility between tools, facilitates a dramatic reduction in overhead, installation and maintenance expenditures.

Essentially, one class of cable and componentry is all that is needed for connectivity and traffic. And, in most professional settings, the access to it is already everywhere you need it to be.

Yet, although the cost effectiveness of IP has compelled, and will continue to compel, decision-makers to make the switch, savvy influencers champion the freedom that IP instills creatively, tactically and strategically.

Eliminating the physical limitations that we’ve long since moved away from with our personal devices—but for which we’ve continued to settle with our professional integrations—while, simultaneously, easing the mental grind that accompanies meshing machines with their own collections of moving parts, IP opens up a whole new world with respect to content creation and rich media production.

With those technical challenges removed from the equation, fewer resources will be dedicated to what compromises it will take to make an idea work. Those resources can instead be spent on ideation and pushing the far limits of possibilities. Rather than immediately disregarding an ambitious endeavor and moving on to the next routine path, never to return, new avenues for content can be explored and bigger, better, bolder goals can be achieved.

Regardless of the content you create or the market in which you operate, IP represents, in the realest sense, opportunity. And, with enabling technologies now readily accessible to anyone, this opportunity is just waiting to be realized.