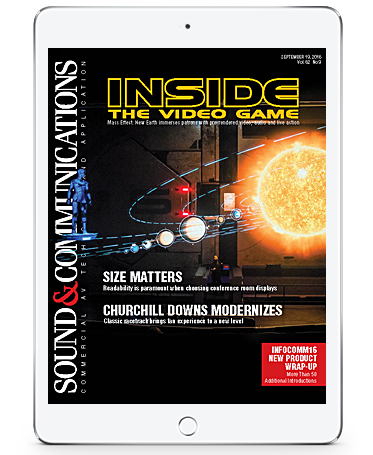 Audio technicians rely on a series of metrics, from Reverberation Time, to STI, to SPL, in order to quantify the performance of rooms and systems. However, these measures also require a contextual element, and although a single-number descriptor is often the preferred way to get a feel for the whole acoustic environment, it can leave out a lot of important context. We explain how to get a more accurate read on acoustic environments by relying on multiple metrics.
By Peter Mapp, PhD, FASA, FAES

Videowalls can be used in retail to tailor marketing messages to a specific audience in a specific space. We take a look at a recent digital signage installation at Brookfield Place in New York City to see how displays can be used to enhance brand identity in a physical retail store.
By Shonan Noronha, EdD

We’re living in a new world of flashy, AV-heavy approaches to worship. However, some Millennials, who are typically the target audience for HOWs that embrace AV in their services, have expressed a desire to return to a more traditional style of worship. We speculate on how AV in worship may change in the coming years if Millennials continue to embrace a return to the traditional worship model.
By David Lee Jr., PhD

The Commish: How Loud Should A System Be?

How loud a system should be is an often overlooked aspect of sound system performance. Typically, the ideal loudness is based on the client’s preference and the room itself, but many clients aren’t comfortable talking in dBs. We suggest some ways integrators can work with clients to figure out how loud a system should be, as well as some guidelines for appropriate volume in a variety of typical spaces.
By James Maltese, CTS-I, CQD, CQT

What Would You Do? Can I have A Gibbs Headslap?

Our columnist reflects on a recent project that raised several red flags that he chose to ignore (to disastrous effect) in the hopes that you will avoid falling for similar tricks from unscrupulous clients.
By Douglas Kleeger, CTS-D, DMC-E, XTP-E, KCD

InfoComm POV: Backbone Of An Industry

Many AV industry watchers have speculated on the potential erosion of the traditional commercial AV channel for some time. The Director of Communications for InfoComm International explains why these fears are unfounded and why traditional business models won’t be going away any time soon.
By Brad Grimes

Recruiting a new generation of young AV professionals has been top of mind in the commercial AV industry as of late. NSCA’s Executive Director lays out what he believes are the major obstacles preventing the industry from recruiting more young people and explains how the NSCA’s IGNITE program can help integrators attract young professionals.
By Chuck Wilson

Movie theaters have embraced digital signage and interactive displays in a big way because of their ability to engage the moviegoing public and enhance their theater experience. In this article, representatives from Diversified Media Group and Barco detail a digitally enhanced cinema lobby installation they recently completed at the L.A. Live entertainment complex and provide pointers on how to design such a system.
By John A. Scarcella and Greg Patrick

Louisville KY’s Churchill Downs, the home of the Kentucky Derby, recently underwent a major AV overhaul, complete with a 15,000-plus-square-foot LED display and new video production areas. We got the scoop on this exciting installation from Alpha Video.
By Jim Stokes

Inside The Video Game

One of the chief concerns when designing a conference room is figuring out how big the display needs to be in order for the audience to be able to read the data it displays. Epson’s Senior Project Manager helps you navigate this problem using the 4/6/8 Rule and the Desktop Equivalent Visibility (DEV) Method.
By Remi Del Mar

In the second part of a two-part feature, an integrator breaks down InfoComm16, covering all of the show’s angles from an integrator’s perspective.
By Mike White, CTS, DSCE

In the final part of our coverage of new product releases from InfoComm16, we present more than 50 audio product introductions.
Compiled by Anthony Vargas

The last manufacturer of VCRs recently announced that it will cease production of new VCR units, signaling the end of the first era of home video recording. Our columnist waxes nostalgic on how the VCR changed the movie industry and how this now obsolete technology led directly to our current Netflix-obsessed, VOD-reliant, DVR-addicted media landscape.
By Pete Putman, CTS