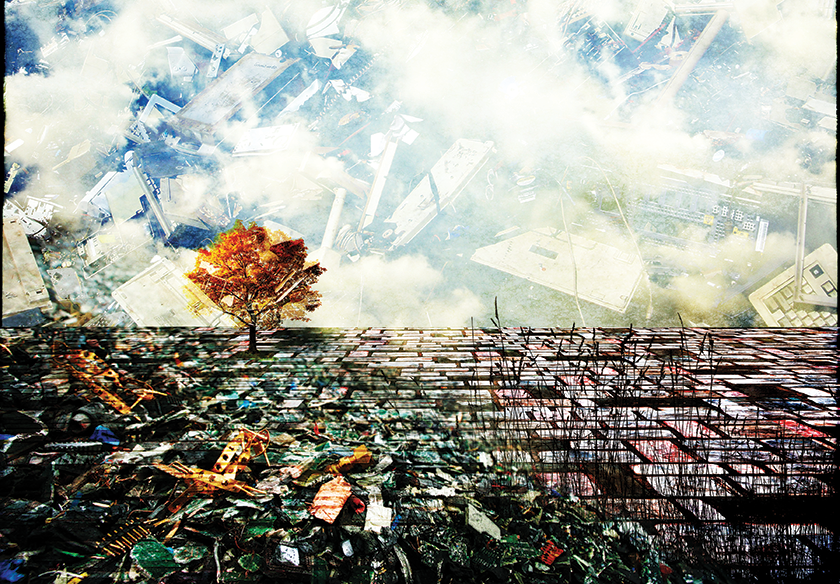 At a time when it feels like we’re moving at close to the speed of light technologically, upgrades are a normal part of the business process. Closely following that is the growing issue of what to do with old equipment, some of which, although perhaps outdated, is perfectly good.

If a great, exciting upgrade project is on the drawing board, there will be myriad new components to put in place, along with numerous dumpsters worth of outgoing gear. In earlier days, a company could just ask an AV integrator to get rid of most of the stuff leftover after an upgrade. Nowadays, depending on the client, there are a number of ways that de-install situations are handled. Although AV integrators, project managers and other project participants have a pretty good idea of what’s needed for a de-install, oftentimes, the client might need to be enlightened about current procedures.

The federal government and various states are having robust discussions about how to respond to potential problems that our technology-driven lifestyles can create. Relative to AV companies, there’s a surprising mishmash of requirements and rules as regards what to do with equipment that’s taken out during an upgrade. E-waste disposal is a growing cost, and it must be factored into today’s contracts, whether, ultimately, it ends up being handled by the AV company or by the client.

Even though a contract will stipulate part, or all, of what happens to de-installed equipment, understanding more fully what needs to happen will allow you, as an audiovisual professional, to do your job better. So, let’s take a brief look at the legal situation. Federal statutes governing e-waste are contained in a handful of laws. You can discover more about that by visiting www.sndcom.us/2Df55ft or www.sndcom.us/2Dghf7O.

Here’s a snapshot: The Resource Conservation and Recovery Act (RCRA) bans all open dumping of every type of waste—period. The law encourages source reductions of waste, recycling and the promotion of the safe disposal of municipal waste. For our discussion, this includes the local disposal of hazardous waste. Because “hazardous” is defined as anything that could cause human or environmental harm, it describes nearly anything that an AV installer or project manager might be tasked with de-installing. Although RCRA contains some verbiage about how to dispose of hazardous waste, it leaves the specifics surprisingly open ended.

As a result, some states have stepped in, legislating for their local problems and concerns. At the moment, only 26 states have formalized specific treatment of AV and other e-waste, leaving 24 states with no legal framework in place except for a few local regulations. (For details, visit www.sndcom.us/2DcKBnH.) The list of which states have imposed a regulatory framework mostly meets expectations. California led the way in 2003 with detailed legislation, and it was followed by Maine in 2004. Many other coastal states joined over the next years. The deep south and a good deal of the Midwest have not done so. The last major state to come on board was Colorado, which, in 2016, just began to implement its program.

Although the US is recycling a healthy one million tons of electronic waste products, we’re creating a seven-million-ton waste problem every year. Naturally, many responsible AV companies are concerned about the situation.

One possible benefit of reselling is keeping tons of gear out of landfills; that’s a very attractive option on many levels. Defraying the cost of a new AV install with some cash fetched by the old gear would bring a smile to most executives, but, if the company must take on the responsibility, then manpower and time invested can sap the monetary return.

Other times, AV equipment, particularly if it’s older, doesn’t really have much resale value; nonetheless, it can do some good for otherwise cash-strapped schools or nonprofits that need AV gear. And this castoff equipment can be genuinely life changing for overseas projects. Again, though, any such undertaking would take manpower and time to effectuate.

From conversations I had for this article, it was apparent that project stakeholders recognize de-installed AV gear as a continuing asset. As such, companies frequently hand over smaller components to other divisions within the organization, whereas larger units are set aside to be mined for parts. But then the “newer is better” philosophy—the thing that brought about the upgrade in the first place—comes into play: Old gear often isn’t nearly as useful as the company hoped it would be; and, generally speaking, old parts don’t integrate well with newer parts.

At the time of this writing, reusable equipment donated to charities was good for company tax write-offs. With passage of the Republican tax law, there might be changes on that front. The full implications of the law have yet to be fully dissected, given the speed of passage. It is also unclear, over the next three or seven years, what effect the partisan lean of Washington DC will have on disposal requirements for AV equipment and possibly toxic component parts.

Bill Sage, who was formerly Regional Manager in the San Francisco Bay Area for SenovvA, Inc., said, “I’ve arranged recycling and sales of a great deal of old equipment for reuse and found new homes for gear among those who, otherwise, could never have afforded it. Among the frequent upgrades for the Fortune 500 clients I’m servicing currently in Silicon Valley, the old gear is usually handed over to the company’s recycler of choice. Often, the integrator is responsible for getting it packed up and ready to hand off, although that’s not always so.” He continued, “Since our office is in California, the rules are very strict regarding what is broken down, what can be resold and how much equipment is recycled.”

Gina Farina, Facilities Manager with SenovvA, knows her way around installs of all kinds. She said, “When I can, I encourage amenable clients that have reusable materials to pass them on to classrooms and other outside groups. Often, when a large facility is doing an upgrade, many types of equipment are going out the door at the same time. With the correct company authorizations, arts groups and other organizations can be the beneficiaries.”

Travis Kjerstad, Technical Services Manager at AVI Systems Inc., in Eden Prairie MN, familiarized me with some new wrinkles in the scrap business: “Minnesota has one of the earlier established e-waste laws [2007], and it requires that all older cabling be pulled out and stripped of the copper for recycling. That is done by one company, while other items go to other businesses that specialize in the buying and selling of old equipment.” He elaborated further, saying, “With many contracts, the owners retain responsibility for all the equipment that’s pulled out. As such, care must be taken so the equipment isn’t damaged or destroyed.”

Josh Bittner, Senior VP of Sales, McCann Systems (Holmdel NJ), discussed project timelines, contractor schedules and client requirements. He said, “Challenges can include having to work at night, or the requirement that the new install not interfere with the currently working installation. All of these factors make the disposal of old equipment more challenging. In some cases, it leads to outside contractors coming in to handle gear disposal, so as to ensure the schedule is met.” Bittner added, “In my experience, the quality of e-waste disposal companies can vary quite widely.”

Although many companies advertise that their waste is thoroughly recycled, the actual practice can be quite different. In 1997, the Basel Action Network (BAN), a charitable non-governmental organization (NGO), based in Seattle WA, was founded. Its stated purpose is “to champion global environmental health and justice by ending toxic trade, catalyzing a toxics-free future, and campaigning for everyone’s right to a clean environment.” In 2016, BAN put GPS trackers on 205 pieces of electronic equipment (monitors and printers) intended for recycling and monitored their progress. Two-thirds stayed in the US for proper recycling, but a third headed overseas. When some pieces of equipment were found in chop shops in Hong Kong and the Philippines, the people handling the materials had no protection again the toxic substances to which they were exposed, nor did they have any idea of the associated health risks.

Under current US federal law, over-seas disposal of this type is not illegal. Unless a state or local law prevents it, sending waste offshore is permissible. In the BAN tracking experiment, however, some equipment originated from a California Goodwill shop, and other pieces originated from Michigan, both of which actually have laws that regulate disposal. Nevertheless, those pieces wound up in Hong Kong with unprotected workers. Although the companies involved are investigating, promising to correct procedures and add oversight, remember that 24 states have no governance related to this issue.

For this piece, I interviewed individuals from a few companies that reputably engage in e-waste disposal. Ryan Lenartowick, Founder and CEO of Elite Technology Lifecycle Management, located in Barrington RI, concentrates on reuse wherever possible, handling equipment from large projects on the East Coast. Among best practices in the e-waste disposal field, he said, “Foremost is to do a thorough audit of all equipment, down to all models and serial numbers.” He added, “Technically speaking, these days, the originating company and/or the owner of the computer, speaker, etc., is responsible for its final disposal.” In the EU, he noted, a fee is put on the manufacturers to underwrite the reclamation of materials, and laws are in place to prevent electronic equipment from being dumped in normal landfills.

Re-Lab Technology Upcycling, another company located in the San Francisco Bay Area, was started by Jordan Hammond, a founding member of the IT team at Uber Technologies. “I was unhappy with the massive amount of IT infrastructure I saw decommissioned across the world,” he said. “So much of it had reclaimable value, and wound up as outright waste when it didn’t need to.” As a result, he founded Re-Lab, which, with Hammond’s worldwide connections, focuses on repairing, reusing and recycling. It seeks to recoup as much money as possible from each piece of equipment, and it does so using the latest industry standards.

The electronics recycling industry also tackled the problem with another certification standard—namely, Sustainable Electronics Recycling International’s (SERI) R2. The R2:2013 Standard reflects the industry’s attempt to regulate itself. Representatives from key stakeholder groups, regulatory agencies/public interest groups and others came together to create and implement that certification.

Initially, the e-Stewards Initiative collaborated with R2, but a dispute arose when the R2 committee decided to test its process overseas with standards that weren’t in line with the final certification that BAN wanted to support. Nevertheless, both current standards are user supported and, according to the Environmental Protection Agency (EPA), “Both programs advance best management practices and offer a way to assess the environmental, worker health and security practices of entities managing used electronics.”

Going forward, AV companies that need disposal options, or that would like a recommendation for a partner, should consider looking to R2:2013 or e-Stewards Initiative-certified companies. Visit www.sndcom.us/2Dg7Qgp to discover information about some of the certified electronics recyclers, including a map indicating which facilities across the country are certified to what standard.

Members of our industry are often wrapped up in delivering shiny, new, feature-packed systems, but we mustn’t overlook the tremendous amount of gear that’s de-commissioned and de-installed every year. Given the potential for the material to be resold, reused or recycled, as well as various components’ potential to do harm, project participants—integrator and client alike—must draw on the burgeoning resources available to make good decisions financially, technologically and ecologically.

It’s just one more opportunity for us to do well, but also to do good.