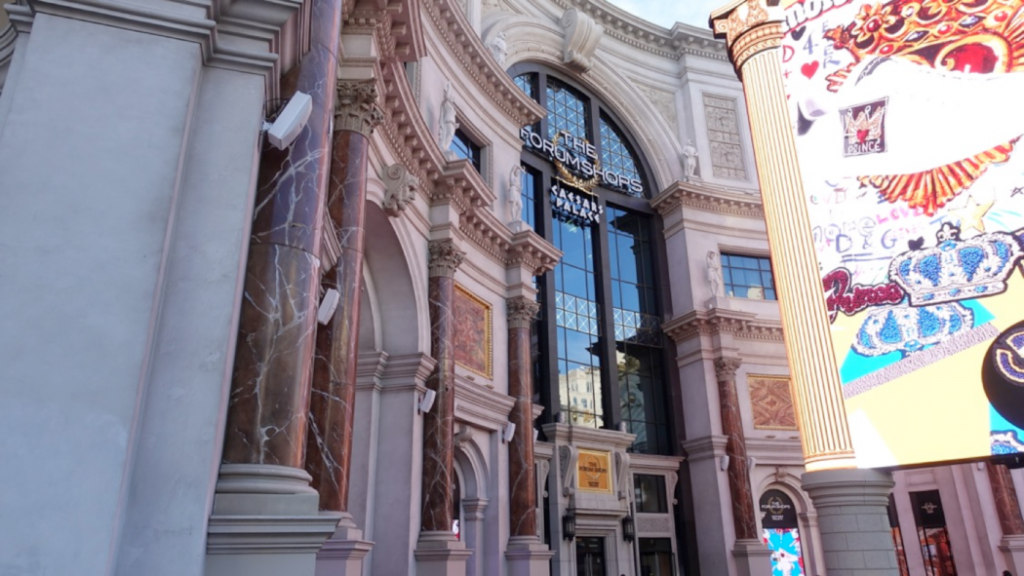 The audio system complements the massive marquee LED display at The Forum Shops at Caesars Palace in Las Vegas NV.

Although sound is integral to AV in most commercial environments, digital signage applications typically do not require sound reinforcement. There are, however, numerous environments where audio can play an active role in creating a more immersive viewer experience.

One oft-repeated reason for not employing augmented audio in digital signage is that the built-in sound quality and coverage from standard digital displays are adequate for most viewing environments, or that the content is designed to be purely visual. But, in reality, the intensifying need for customer engagement in locations such as retail, hospitality and museums is focusing increased attention on audio-for-signage.

With the rebound of brick-and-mortar stores as shopping experiences, retail establishments are looking for new ways to attract and engage shoppers. Earlier this year, The Forum Shops at Caesars Palace in Las Vegas NV installed a high-end Bose system to pump up the impact of its massive LED marquee at the entrance. Commenting on the difference that audio makes, Moment Factory Producer Christian L’Heureux stated in a press release, “The visual elements were an outstanding success. Immediately, we had visitors stopping to look and take pictures, and that increased traffic to the shops.”

But, even after the installation of amazing visual elements, everyone on the team agreed something was still missing, so Moment Factory and property owner Simon enlisted the help of Mood Media, a company known for elevating customer involvement. “We wanted a more immersive experience, so we added a sound layer to the project,” L’Heureux noted. “I think the best way to tell a story and have a captivated audience is to have sound, because it crystalizes the experience for the visitor.”

Mood Media’s Director of Retail and Development System Sales, Craig Breigle, noted, “After coming up with the initial system design, we ran it through Bose Modeler software to see exactly how the system would perform, and, after verifying the results, we moved to the installation phase.” Working together, Bose, Mood Media and Moment Factory were able to get the system commissioned, load the content and fire it up in a single evening. According to Breigle, “It was the loudest, best-sounding, most attention-grabbing attraction on the Strip.”

A variety of audio solutions is available to create an immersive experience for customers and guests—in virtually any space. A common problem to address in digital signage environments is ambient noise or spillover from another area. Several companies, including Brown Innovations and Holosonics, provide good systems for tightly focusing sound, but each has its unique way of addressing directionality and providing practical features for signage.

Specialized features available in some systems that could prove useful in specific applications include the ability to customize volume response time to varying ambient-noise conditions and easy adjustment of minimum/maximum volume levels over a digital signage network. Another useful feature in applications such as retail, museums and attractions is the ability to focus audio output tightly on targeted audience members or locations.

Whatever solution you decide to use, it’s also helpful to bear in mind the following factors when integrating audio with digital signage: selection of appropriate amplifiers and speakers/arrays to provide focused coverage, along with full-range reproduction at low distortion levels; limiting volume to avoid disruption of normal activities; and using infrared sensors, microphone-driven triggers, under-carpet switches or similar devices to raise volume only when a visitor or customer is within hearing range.

What’s next? Instead of just using audio to deliver the message, “experience designers” are already looking to enlist Alexa, Siri, Cortana and their AI friends to enhance user engagement further. For a potential customer to stop and use a touchscreen requires a much bigger commitment than simply responding verbally to an audible question or prompt. Millennials, and even some of us older folks, are very comfortable interacting with audio-based AI, and this could be the next gateway to converting casual viewers into deeply engaged customers. Not only will audio AI enable customers to converse with signage content, but it also will make it easier for you or your client’s team to monitor, control and customize content for each user. Several vendors, including Mango Signs and Revel Digital, are already deploying smart, voice-activated tools for use with signage systems.

Creating a successful audio solution for digital signage requires an understanding of human auditory capacities, psychological issues related to personal space and, sometimes, the best practices of the old-fashioned carnival barker. The technologies you choose when integrating audio into your systems should increase viewers’ engagement with the content—without disrupting the customer experience or the surrounding environment.