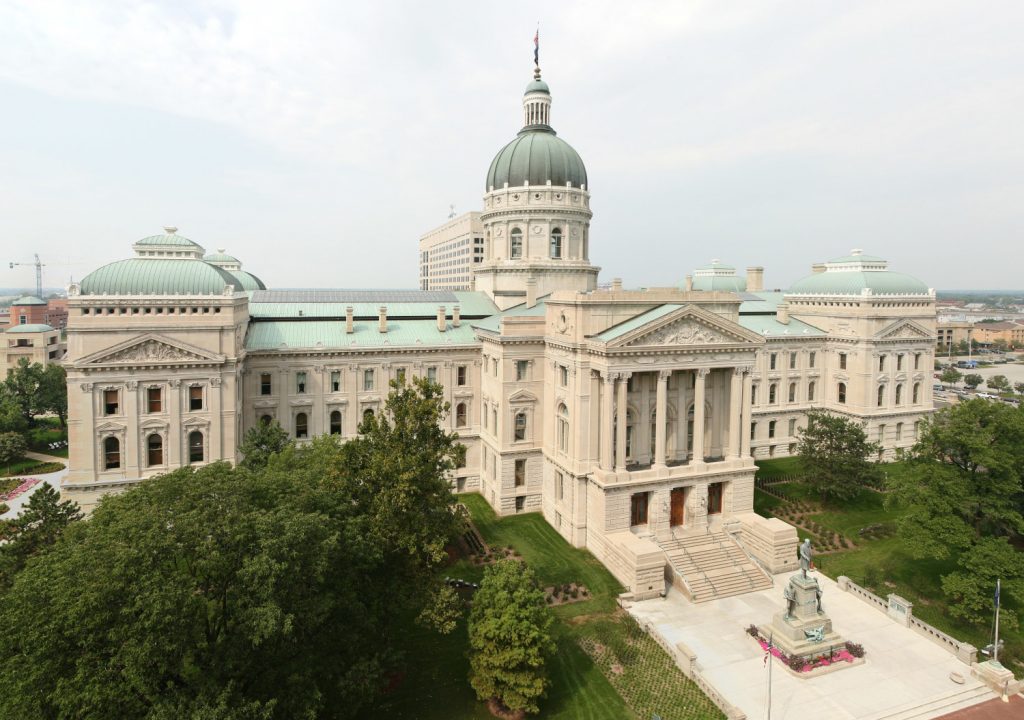 The Indiana General Assembly recently passed a bill mandating that hearing-aid buyers be given information about telecoils and AFILS prior to being fitted with or dispensed their hearing aids, as well as requiring that hearing loops be considered, unless they would be impractical. (Photo courtesy Massimo Catarinella - Creative Commons Attributions-Share Alike 2.5 Generic license).

Today’s technology allows audio engineers to do truly remarkable things when they design and install new sound systems in theaters, auditoriums and houses of worship. Look, for example, at the state-of-the-art system in London, UK’s Royal Albert Hall, which recently was covered in Sound & Communications. (See “Redesigning the Iconic” in the September 2019 issue.) These spaces are imaginatively deploying extensive audiovisual technology to lure theatergoers, the faithful and a range of others to the intimacy and enjoyment of a live experience. Regardless of their sophisticated sound systems, however, other, less-well-equipped venues can still be problematic for those who have hearing loss. Often, those problems can keep such individuals from attending in the first place.

The effective reach of hearing-aid microphones is typically only about six to eight feet, although that depends on the local acoustic environment. As such, the cough of a nearby music enthusiast or the rustle of turning pages can completely overpower the sound being broadcast from farther away, regardless of whether that sound boasts high fidelity. To exacerbate the situation, for the typical hard-of-hearing person, whose hearing acuity is generally more adversely affected in the upper range of sound, it will be difficult to hear the important sounds of consonants or the trill of the piccolo regardless of a sound system’s technical sophistication. The answer to this problem is an assistive-listening system (ALS).

It was 40 years ago that a special Tony was presented to New York-based AV firm Sound Associates, Inc., for its work developing and installing the first-ever infrared (IR) ALS for a Broadway production, “Peter Pan.” Soon, IR systems became a Broadway baby, finding their way to theaters and concert halls from coast to coast; in so doing, they made live theater more accessible to people who had hearing loss. The problem with the systems, however, was a simple one: Many of the people who could potentially benefit from an ALS didn’t like or use the equipment.

Those who have hearing loss don’t want to call attention to their disability, and they don’t want to have to borrow and return any equipment. They also have hygiene-centered concerns regarding previously used headphones. They’ve learned that the sound from “throwaway” earbuds is less than satisfactory, and, most importantly, they’re reluctant to take off (and possibly damage or lose) their precious hearing aids in order to hear. Consequently, they either don’t hear well during theatrical performances and other aurally focused events, or don’t even attend. [Editor’s Note: It’s worth mentioning that many auditorium IR systems can be made fully compatible with people’s hearing aids by utilizing a neckloop, rather than headphones or earbuds. In this way, listeners can then use their own hearing aids. According to our “Sound Advice” columnist, Peter Mapp, PhD, FASA, FAES, this is common practice in the UK.]

Data I’ve seen suggests that hearing-aid users prefer an audio-frequency induction-loop system (AFILS). The touch of a button on an individual’s hearing aid or cochlear implant (CI) turns on receivers called telecoils secreted directly inside the hearing aid or CI. Those telecoils connect the individual wirelessly to what’s commonly called a “hearing loop.”

The Hearing Loss Association of America (HLAA) found that 85 percent of its members have telecoils in their hearing aids/CIs, and the vast majority of those people use them whenever they’re in the presence of a loop. The Committee for Communication Access in New Mexico (CCAnm) undertook a survey in 2017 that found hearing-aid wearers were six times more likely to use a hearing loop as compared to a radio-frequency (RF) or IR system. Indeed, even with the offer of a neckloop, rather than earphones, the survey indicated that the majority of those who wear hearing aids would not borrow and use the necessary equipment. Indeed, the data suggests that, in the US, it’s common for few neckloops or earphones to be borrowed at many venues that offer such systems.

Given that RF and IR systems might be less frequently used than hearing loops are, there is a growing number of theaters around the country being equipped with hearing loops. The HLAA’s “Get in the Hearing Loop” initiative has compiled a list of more than 270 theaters and concert halls across the US that are known to have installed hearing loops; moreover, there are literally thousands of houses of worship that have made the move to embrace hearing loops. That’s not enough to satisfy the hard of hearing, though—nor should it be.

People who have hearing loss often advocate for their local performing-arts venue or house of worship to install an ALS. What they’ve all too often found is that, when they convince a theater owner or house of worship to install an AFILS, the venue’s AV integrator will convince the client to opt for a lower-cost system; they don’t always consider the cost per actual user, which would likely be better with a loop. Against this backdrop, some hearing-loop users have begun to say, “There oughta be a law requiring that, if technically feasible, hearing loops should be considered as the default ALS.”

In order to be in compliance with the Americans with Disabilities Act (ADA), most public spaces must include an ALS. Awareness of the needs of those who have disabilities is increasing among government agencies that ensure ADA compliance. Accordingly, many are listening to hard-of-hearing citizens and acting to ensure that hearing loops are considered as the default for any new or significantly upgraded ALS. The New York City Council was the first to act on this idea. It passed a law in 2017 that mandated that, for city-funded capital projects whose estimated construction cost is $950,000 or more, at least one assembly area must be equipped with an AFILS. (An alternative ALS is permissible if the mayor determines it to be significantly more effective than an AFILS.) Section 1, Chapter 9 of the New York City Charter was amended to add a new section, 224.3, for this law, which went into effect on January 1, 2018.

Loop advocates around the country took note of the New York City law and, very soon, the Minnesota Legislature took action. It passed a law, with limited exemptions, that stipulated the following: For state-funded capital projects involving a public gathering space, the space must have audio induction loops if it has or will have a permanent audio-amplification system. The law applies to all projects funded with an appropriation enacted after January 1, 2017, for which requests for bids or proposals have been issued after January 1, 2018. For projects for which requests for bids or proposals were issued before January 1, 2018, commissioners and agency heads were nevertheless encouraged to comply with the regulation, if possible.

The Minnesota Commission of the Deaf, DeafBlind and Hard of Hearing is charged with considering and granting requests for exemptions, as well as following up on compliance with the law. The state legislature required that, on January 30 of every even-numbered year, beginning with 2020, the commission must prepare a report to identify each exemption granted in the previous two calendar years.

In Indiana, the Indiana Committee for Communication Access was organized to advocate for a law mandating the following: 1) that hearing-aid buyers be given information about telecoils and AFILS prior to being fitted with or dispensed their hearing aids, and 2) that hearing loops be mandatory to consider as part of any public-address system, unless deemed impractical, for new or remodeled public buildings. A bill that contains both provisions passed the Indiana General Assembly in April 2019, and it was signed into law by the governor on May 2. At the same time that the Indiana bill was being considered, a similar bill was before the Maryland General Assembly. It also passed and it’s now statewide law, having been approved by the governor on April 30.

Because the Maryland law only applies to state-funded construction and renovation projects, hearing-loop advocates in the state have now had a regulation drafted, which the Baltimore County Council will consider, to get county facilities covered. The county—the state’s third most populous—is a part of the Baltimore-Washington DC metropolitan area. The regulation’s proponents hope it will be a catalyst for similar countywide and citywide regulations throughout the region.

In related news, hearing-loop advocates have had legislation drafted in Wisconsin that mirrors the two-issue bill that Indiana passed. The legislation is expected to be introduced in the state legislature soon. Activists in several other states are at various stages of proposing and developing similar initiatives.

Placing a hearing-looping mandate on private businesses would be a difficult—albeit not impossible—task. If the ADA can require ramps, 36-inch doors and ALSes that are compatible with hearing aids, I would argue it’s not a stretch to imagine another revision encouraging that the ALS be a hearing loop, unless deemed impractical. After all, installing systems that aren’t often used just to meet the requirements of the ADA is both a waste of money and a disservice to those with a hearing impairment. Just as you can lead a horse to water but you can’t make it drink, you can provide an ALS but you can’t make people use it.

Advocates hope that laws like those already on the books will help breed familiarity with AFILS; accordingly, word-of-mouth about loops in publicly owned facilities might spur the installation of hearing loops in privately owned facilities required by the ADA to have an ALS.

Baby Boomers—some of them with noise-related hearing loss caused by a lifestyle filled with boom boxes, rock bands, power mowers, Ski-Doos, snowmobiles and other high-decibel items—are reaching retirement age. That’s the stage in life at which age-related hearing loss can become a life-altering experience. This group could prompt Washington to say, “There oughta be a law to ensure the preferences of hard-of-hearing citizens are catered to.”