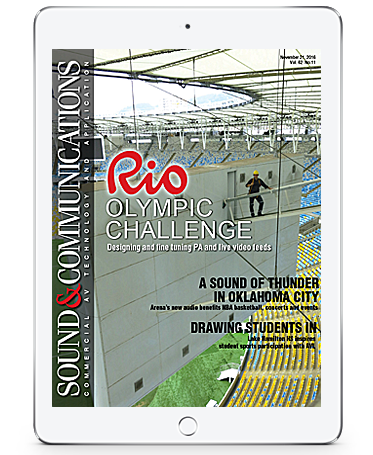 Consumer displays, particularly flatscreen televisions, prioritize video technology over audio technology. This usually results in tiny speakers that are not directed toward viewers. Our columnist breaks down the impact of this design approach on television audio.
By Peter Mapp, PhD, FASA, FAES

Digital media projects require input from many different teams with strategic expertise. Digital signage projects especially should be considered in the context of the greater digital ecosystem, but which teams should participate, and at what stage of the project? We break down the relevant parties and how involved they should be for a variety of digital signage applications.
By Shonan Noronha, EdD

HOW: Business: A New Gatekeeper

A growing number of churches are adding a Media Pastor to their leadership teams. And, in order to effectively meet the needs of houses of worship, integrators should know how to communicate and deal with these Media Pastors. Our columnist offers a primer on this emerging group of AV decision makers.
By David Lee Jr., PhD

Mountain Christian Church in Joppa MD recently underwent a major overhaul of its broadcast campus to improve video production for online streaming and remote viewing at its satellite campuses, as well as adding a massive LED videowall, a new line array and a revamped lighting rig. We take a deep dive into this installation with integrator Mankin Media Systems.
By Anthony Vargas

What Would You Do?: When Is Enough Enough?

There’s a fine line between productive collaboration and talking too much. But good ideas can come from anywhere, and they often don’t emerge unless all parties take the time to talk things out. Our columnist shares a lesson he recently learned about the value of a good exchange of ideas.
By Douglas Kleeger, CTS-D, DMC-E, XTP-E, KCD

InfoComm POV: Growing An Industry Into A Market

The Executive Director and CEO of InfoComm International offers some insight into InfoComm’s latest strategic plan, as well as some highlights from InfoComm’s 2016 Global Pro-AV Distribution Channel and Trends Report.
By David Labuskes, CTS, CAE, RCDD

Improvements in collaboration technology and differences in work/life preferences between Millennials, Boomers and Gen-Xers have resulted in the advent of flex work, the rise of irregular hours and the proliferation of new communication platforms in the workplace. NSCA’s Executive Director offers some advice for getting workers on the same page even when they keep different hours and communicate in different ways.
By Chuck Wilson

The Executive Director of AQAV and CEO of Audio Visual Resources, Inc., explains how the 2016 update to the AV9000 standard can help integrators design systems that are less reliant on punch lists at the end of a project by emphasizing quality controls in the early stages.
By Mario Maltese, CTS-D, CTS-I, CQD, CQT

Sharp’s Director of Product Planning and Marketing, Pro AV Products, spells out the three Cs of successful boardroom and conference room technology: Compatibility, Collaboration and Cohesion, and how adhering to these principles can enhance a client’s conference room experience.
By Gary Bailer

AV installations in stadiums and arenas tend to be big-money projects, and the most successful of these installations involve much more than deploying hundreds of screens throughout the venue. The Founder/CEO of Exterity offers a primer on the benefits of investing in IP video and digital signage to create an immersive fan experience.
By Colin Farquhar

A Sound Of Thunder In Oklahoma City

The 580,000-square-foot Chesapeake Energy Arena, home to the NBA’s Oklahoma City Thunder, recently underwent a complete sound system overhaul to provide world-class sound for home games and live concerts. We got the inside story of this major arena installation from the integrator, Ford AV, and consultant Marsh/PMK International.
By Jim Stokes

Thanks to our increasingly AV-saturated world, Millennials have come to expect video everywhere in public venues. Certain school athletic programs have recognized this trend and are prioritizing a strong video presence in their athletic venues’ AV systems in order to attract student athletes. In a fascinating case study on this phenomenon, we got the scoop on the AV behind Lake Hamilton High School’s new Wolf Arena from integrator American AVL and architectural firm Lewis Elliott McMorran Vaden Ragsdale & Woodward.
By Dan Daley

The lead up to the 2016 Rio Olympics saw the creation of several new athletic venues in Rio de Janeiro, in addition to the renovation of several others. These new and renovated arenas also included a huge amount of Olympic-caliber AV, much of which was designed by Walters-Storyk Design Group Brazil. We take an in-depth look at the AV behind the fan experience at these Olympic venues.
By Renato Cipriano

Two years ago, superMHL was being hailed as the next big thing in display interfaces. But lately, superMHL news has been hard to come by. Our columnist investigates the reasons for superMHL’s recent low profile in the news and weighs its chances for a comeback against the current crop of video interfaces.
By Pete Putman, CTS