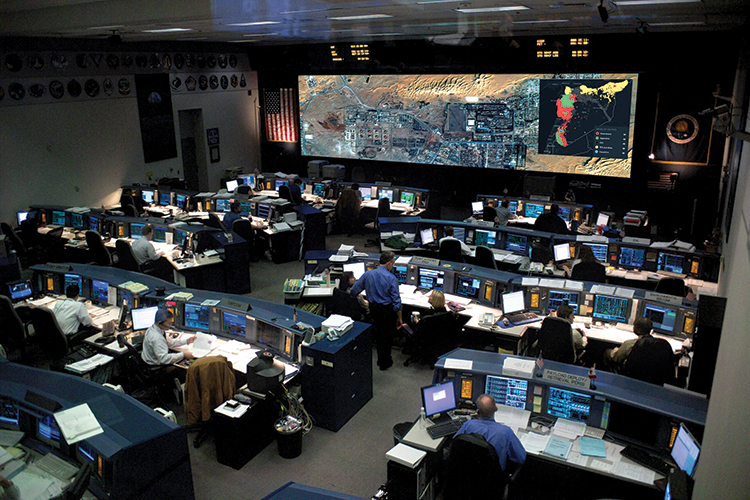 Government facilities and public works entities require an immense amount of information to be distributed, analyzed and acted upon, simultaneously, to ensure the efficient and unbroken operation of their services. In such a high-stakes environment, where mission-critical decisions are made constantly, temporary hiccups stemming from display technology performance malfunctions are not acceptable. Every member of the organization needs to be able to receive and process vast swaths of data with a versatility and dynamism that traditional display technologies have proven incapable of achieving. Networked digital display systems, with their ability to consolidate countless inputs of data into one versatile platform, provide the most reliable information-distribution ecosystem on the market.

The comprehensive overhaul of an aging physical infrastructure is a challenge that many governments are reluctant to undertake, given the cost in time and resources; however, the path to safer and more efficient public services is not exclusively paved with concrete. Rather than renovating the external body of facilities and utilities, government organizations would be better served by retrofitting their internal nervous system with a networked suite of large-format digital display solutions. An example of this kind of digitized modernization can be found at the New York Power Authority (NYPA)’s headquarters in White Plains NY, where Andrew Cuomo, Governor of New York, plans to incorporate a state-of-the-art asset monitoring and diagnostic center. This networked display integration furthers the NYPA’s broader goal of becoming the nation’s first end-to-end digital utility, and it will enable actors at the command-and-control level to communicate more swiftly and efficiently with representatives on site at the operational level.

The primary reason that government facilities and public works organizations will reap so much utility by incorporating networked display solutions is that these groups are responsible for such sprawling matrices of operation, which require constant communication. Communicating in real time with every part of this sprawl is absolutely necessary, but, to this point, it has proven too tall an order for traditional display solutions. Information just simply isn’t being accessed and distributed quickly and easily enough.

A networked large-format digital display system is ideal for this challenge, because it enables a command-and-control center not only to assess and act on information from each data point in its matrix, but also, perhaps obviously, to see these workings as part of the same uninterrupted image. The internal digitized network of a display system is where the majority of its communicative efficacy is derived from, but let’s not forget that, sometimes, the best way to get a handle on the whole picture is actually to see the whole picture. Networked, large-format display systems allow for exactly that. Visualizing the entire scope of an organization on a single, uninterrupted display will make performance patterns easier to identify, and it will streamline the problem-solving process if, and when, issues arise.

The NYPA headquarters communicates data on its web of operations with an 81-foot-long digital display composed of an array of smaller display units. The sheer size and informational comprehensiveness of the installation allows several teams from within the organization to work alongside one another effectively. This has created a collaborative work environment, better facilitating the sharing of decision-critical insights, as well as the interspersion of disparate expertise and perspectives. This sort of open workspace concept has grown in popularity in recent years, as other industries look to capture the free-flowing creativity that it has fostered in the tech sphere. By integrating a large-format digital display, networked throughout an entire organization, a command-and-control center can break down (literally and metaphorically) communication barriers between departments. This is what the NYPA hopes its project accomplishes.

Regarding the physical displays themselves, there are various digital display technologies, each of which brings its own advantages and disadvantages to the table. For a display that must be viewed clearly by large groups of people from wide angles and a range of distances, such as, for example, in the NYPA headquarters, LED technology is almost always the best solution. For one thing, LED carries greater off-axis viewability, which is a key component in shared workspaces because it allows coworkers to see the same image, in the same way, from opposite sides of the room. For another, LED shines brighter than rival display solutions—naturally, a plus—and it leads the field in cost efficiency and energy efficiency. Other types of display technology can outperform LED in their own specific ways, but, for the purposes of command-and-control-center usage, LED has reliably established itself as the best bet.

The proliferation of digital technology has made communication faster and easier than ever. However, this progress has brought with it heightened expectations. Citizens rely on government facilities and public works entities to provide services that simply cannot stop working—a task that requires lightning-fast administration at the command-and-control level. Trains can’t stop running, water can’t stop flowing and the integrity of the power grid can’t be compromised. Why? Because society depends on them, and government facilities and public works organizations have promised to deliver.

Communication is the key here. The only way to administer these assured services effectively is for each member of the operation to be in sync. By accessing, analyzing and acting on information in real time through a fully integrated networked display system, command-and-control centers will be able to streamline productivity, reduce maintenance costs and eliminate inefficiencies. And that’s how you keep a promise.