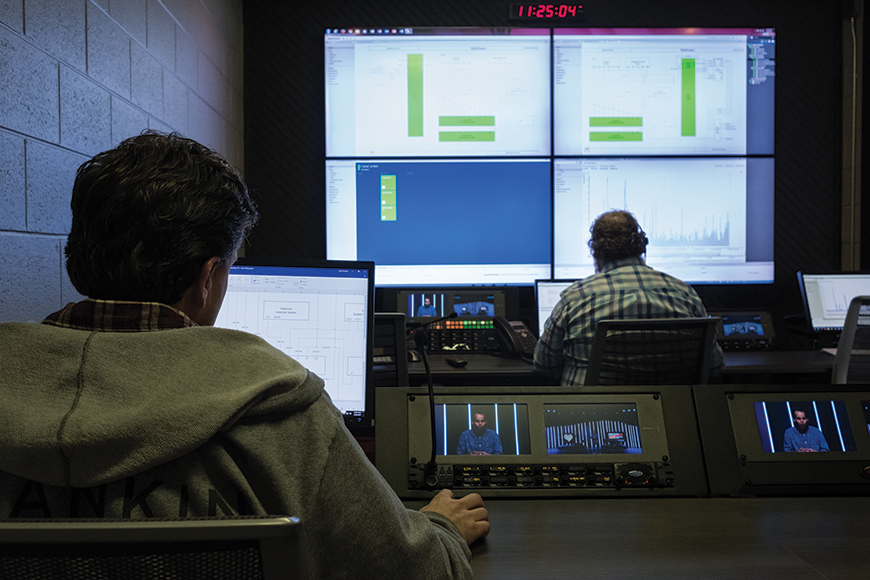 As more and more houses of worship adopt multi-campus approaches to ministry, both systems integrators and church AV teams have had to come up with innovative ways to support broadcast-quality video production and online streaming. As is frequently the case in the worship market, these integrators and AV teams are often working with small budgets and volunteer staff, which can make delivery of high-quality streaming video seem out of reach. However, some integrators have responded with innovative service offerings in an attempt to fill the gaps in their clients’ AV budgets and staff expertise.

Franklin TN-based Mankin Media Systems devised its own ambitious solution, Guardian Services, in an attempt to solve these all-too-common problems. “Guardian is a managed service offering that is designed to respond to a trend that we see growing increasingly significant within the house of worship market,” Michael Wells, Chief Technology Officer at Mankin Media Systems, explained. “The fastest-growing churches, and, in fact, most of the growing churches in America, are growing by employing a multi-site church strategy, which is highly dependent upon technology. This technology-driven growth strategy is centered on the video delivery of teaching, as well as extending the style and liturgy of a successful primary location to as many satellite locations as possible. It’s not unlike franchising.”

A fundamental flaw in this franchising model, however, is that not all of the new satellite locations will have the staff and budget resources that the central location has, and the central location’s staff is often stretched thin enough as it is, and certainly unable to micromanage AV production at satellite locations. As Wells put it, “There are very few toolsets available to churches to provide quality of experience, monitoring and intervention, in order to take all these individual locations and make sure they represent the primary church’s expression and worship faithfully.”

Further complicating matters, there is a shortage of skilled AV professionals for churches to hire as they expand to additional locations. “When churches are launching campuses, they can’t afford to extend full-time roles to production technicians—and even if they could, there aren’t enough of them to go around,” Wells said. “For instance, there are at least 2,000 churches, as of 2014, that have more than one location in the United States. That number has probably grown significantly since 2014. Let’s just say that half of them want to start a new campus next year to extend their ministry reach. And, if those are technology-driven approaches that are complex enough to require, at the very least, a skilled part-time person, if not a regular contractor or full-time production guy—let’s say 80 percent of them are—that’s 800 positions that would need to be filled.”

Wells continued, “We feel that the market is not producing qualified people fast enough, and the ones whom it is producing are actually in demand by a lot of different industries that don’t require people to work on weekends, and that can pay more than your average house of worship.”

By providing the on-demand services of experienced AV technicians, Mankin hopes to give its clients the freedom to make hires that will impact their ministry outreach, rather than worrying about finding people to run its systems. In order to do this, Mankin’s $1.3 million network operations center is staffed by a team of dedicated Guardian technicians who are on call 24/7. And these technicians are backed up by Mankin’s integration team. As for the network operations center, Mankin went to great lengths to ensure it met the highest industry standards. “We basically built a full Tier IV data center in terms of certification requirements,” Wells described. “For redundancy, we have dual-redundant 10-gig fiberoptic paths coming into the building. We have a natural gas backup generator, and we have dual-redundant power, as well as a flywheel UPS and battery backup UPSes.”

The Guardian Services offering consists of four separate services—Lifeline, Protect, SlipStream and GameFilm—that are offered in a la carte packages, depending on the client’s unique needs. These packages are available for virtually any production system installed in the last six to eight years, whether it was installed by Mankin or another AVL integrator, or self-installed by the client. Lifeline and Protect are geared toward troubleshooting and quality assurance, whereas SlipStream and GameFilm are specially curated, video-oriented services aimed at facilitating the “franchise” model of worship, alluded to earlier.

Lifeline is Guardian’s real-time support offering, which provides clients with on-call access, via intercom, to Mankin’s team of virtual staffers stationed at the network operations center. “The brand promise of Lifeline is a guarantee that we will respond to the problem in real time and solve it in conjunction with the local team,” Wells said. For problems that cannot be solved immediately, Mankin will work with the client to devise a temporary solution that can be implemented immediately.

“Protect is our proactive monitoring service,” Wells continued. “Most equipment, statistically speaking, has no higher probability of dying right before the service than it does on Tuesday morning. The problem is, nobody will find out until they have to go into the room. The brand promise of Protect is that we will identify any issues while there’s still time to do something about them, so that they don’t create an unexpected situation during weekend services.”

To illustrate the Protect offering, Wells described a hypothetical application that should be familiar to most integrators. “A projector can talk if you have the right software to listen,” he began, “and it can tell you on Tuesday morning at 9am that the lamp is about to blow, or has blown, or there’s an airflow problem, or any number of things.” He continued, “But you have to have the right software to listen, and the right people to maintain that connectivity and understand how to interpret the messages into an action item. Our system will detect a problem with that projector, our team will open a case that next morning, and we’ll remote in through exclusive IP connectivity links that we set up to the projector itself to do some diagnostics and formulate a plan for making sure that projector works on the weekend.”

The SlipStream streaming-video service is the offering that’s most tied to delivering broadcast-quality video to satellite campuses. “SlipStream is a product that is designed to outsource the delivery of video from point A to point B, including time-slipped playback, for both multi-channel video and multi-channel audio, in any resolution, including 4K,” Wells explained. “It is a suite of off-the-shelf, broadcast-grade products and software assembled in clever ways to produce a highly reliable, fault-tolerant method that is remotely managed and serviced for a setup fee and a monthly fee in perpetuity, as long as you have the service.” He added, “It’s designed to prevent the need to have a highly specialized video engineer on staff. And, compared to some of the other turnkey options on the market, it’s a full broadcast-based approach. It’s not based on consumer IT technologies, such as Flash or HLS. And we can provide full real-time and proactive support using the Lifeline and Protect topology.”

“GameFilm is a system for archiving video point-of-view feeds automatically, 24/7,” Wells continued. “The archived content is accessible for 30 days minimum, or up to 90 days on a cloud-based archive platform. You can watch all your campuses at the same time, and rewind them and fast-forward them. It really is a huge efficiency improvement on other ways that churches have attempted to gather video data from their multi-site campuses.” He added, “It’s all in full high-definition video and 48K audio. In fact, it can do multi-channel audio, too.”

According to Wells, “Most everyone else in our industry, in our vertical, in church world, think, ‘Our job is to install a system, finish the punch list and teach them how to use it. And we’ll answer the phone on Sunday morning if they call us and they’re having a major emergency.’ This is such a different model in the house of worship market specifically, and it allows us to implement a state-of-the-art, high-level broadcast production system without the church needing to add more staff resources, while also allowing us truly to be able to own the outcome of the problem we’re trying to solve.”