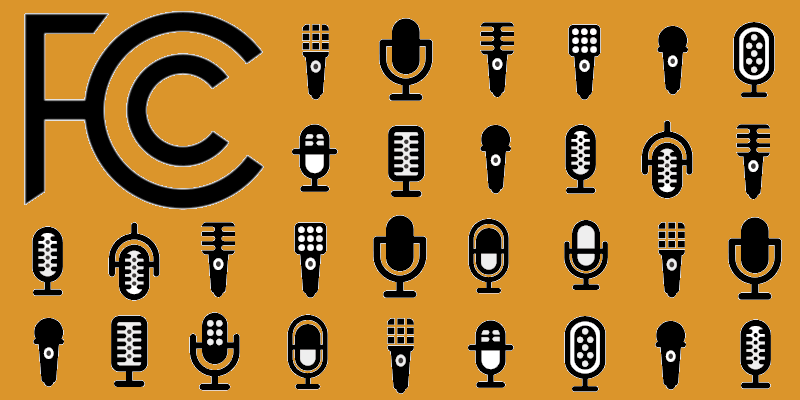 Still own systems that can operate in the 600MHz or 700MHz bands? Read this!

A lot has changed in the past dozen years, including the rules for operating wireless microphones. Traditionally, most wireless microphones, especially those of professional grade, transmit via radio waves in locally vacant TV channels. These are commonly referred to as white-space channels (i.e., a channel not being used for over-the-air TV broadcast), primarily in the Ultra-High-Frequency (UHF) range.

In the US, the Federal Communications Commission (FCC) regulates the wireless airwaves. As US households became less dependent on over-the-air TV, the FCC reallocated upper portions of the UHF TV band to accommodate demand for mobile broadband. Formally, the UHF TV band spanned from TV channels 14 to 69, which corresponded to radio frequencies from 470MHz to 806MHz. In 2009, when the US transitioned from analog TV to a digital standard, UHF TV channels 52 to 69 (698MHz to 806MHz, commonly referred to as the 700MHz band) were reassigned to mobile broadband and public safety. Where active, those services cannot share radio-frequency (RF) spectrum with wireless-microphone users. Thus, the FCC has not permitted wireless microphones to operate in the 700MHz band since June 13, 2009.

Nonetheless, some unwitting microphone operators might have found that their 700MHz systems continued to work after that date, without experiencing interference, because the infrastructure for those new services had not yet been built out—and that is still the case even to this day. Nevertheless, it remains illegal to operate wireless microphones in the 700MHz band.

More recently, large portions of the 600MHz band—those above TV channel 37—were reallocated to mobile broadband. That transition was completed on July 13, 2020. After that date, it became illegal to operate any wireless microphone that has the ability to tune to any frequency in the new broadband downlink block (617MHz to 653MHz) or uplink block (663MHz to 698MHz). There are portions of the 600MHz band in which wireless microphones are permitted to operate, but under different rules. (Most notably, there is a 20mW maximum-output-power limit on microphone transmitters.) The permitted areas are guard bands: 614MHz to 616MHz (below the downlink block) and 653MHz to 663MHz (known as the duplex gap, which separates the downlink and uplink blocks). The lower 4MHz of the duplex gap is reserved for the FCC Part 74 licensed operators (discussed below).

It’s important to understand that, if you have a legacy system that can tune to any part of the downlink or uplink blocks, it’s now illegal to operate it in any fashion in the US. In other words, you can’t simply keep the system tuned to the permitted frequencies in the guard bands. Manufacturers can modify some legacy systems to comply with the new 600MHz rules—for example, by constraining the tuning range to the duplex gap and limiting the transmitter to 20mW. However, such modifications might not be cost effective for lower-priced systems. You can sell your old 600MHz and 700MHz systems, but you must clearly mark all paperwork and advertisements as being “for use outside the US.” Alternately, you can contact the author for information on how to make a tax-deductible donation of legacy systems to Latin American religious organizations.

So, which frequency bands should you consider when making new purchases? It’s unlikely that any further FCC reallocations will take place in the TV band in the foreseeable future. Vacant UHF TV channels between 14 and 36 (470MHz to 608MHz) are still good choices for operating wireless microphones. Those frequencies offer excellent radio-wave-propagation characteristics that provide high transmission reliability for wireless-microphone applications.

Many wireless-microphone systems have been introduced in alternate frequency ranges, as well; those include the unlicensed 902MHz to 928MHz, 1.9GHz digital enhanced cordless telecommunications (DECT) and 2.4GHz bands. Those ranges are generally fine for light-duty configurations, such as a couple of microphones operating in a suburban or rural house of worship. One does have to keep in mind, however, that unlicensed frequency bands host a plethora of different wireless devices: garage-door openers, drones, baby monitors, radio-controlled toys, etc. If multiple unlicensed devices are operating within a limited area, they have the potential to cause interference to each other.

Another important issue to consider is whether your entity is eligible for an FCC Part 74 license. In general, houses of worship that conduct over-the-air broadcasts, or ones that routinely use 50 or more wireless microphones, are eligible. Note that the definition of “wireless microphone” includes in-ear monitors, wireless instrument systems and intercom channels. Your organization might exceed the 50-link threshold sooner than you would think. Licensing provides rights, privileges and protections that are worthwhile; those include priority over any unlicensed devices and access to additional frequency bands only available to licensed operators. Readers are invited to contact the author for more information on licensing.

Let’s summarize the most important takeaways from this discussion.