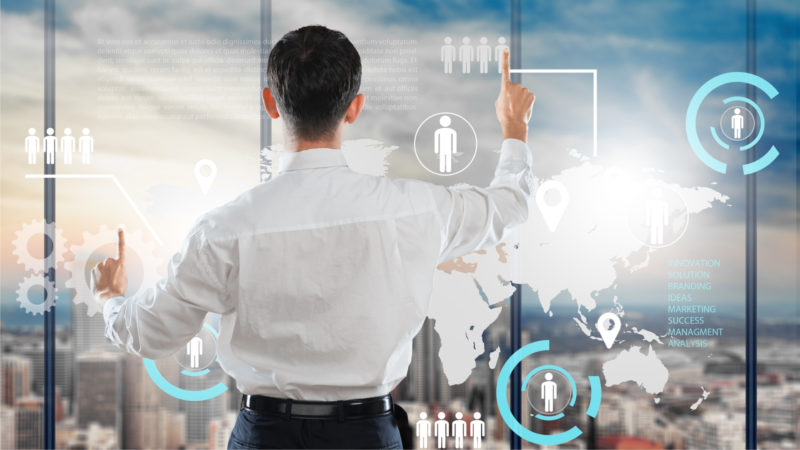 Amid a wave of hype around emerging technologies, four specific trends are showing the potential to help businesses transform the way they operate. To varying degrees, virtual reality (VR) and augmented reality (AR), artificial intelligence (AI), blockchain and automation are staking out a more prominent role in the digital operations of organizations.

CompTIA recently surveyed some 700 business professionals at US companies to gauge their awareness and usage of VR/AR, AI, blockchain and automation. Although the survey found most businesses remain on the sidelines, use cases for each of these solutions are beginning to emerge, illustrating their potential. And, to varying degrees, these four emerging technologies are making inroads into the audiovisual market. 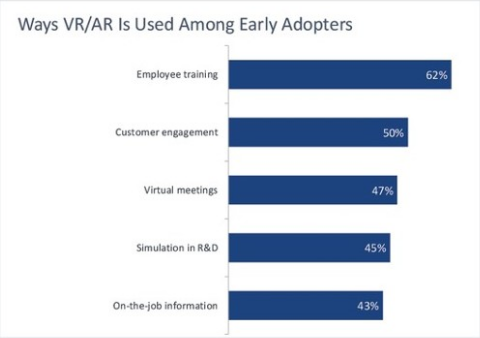 As both VR and AR mature, the two will likely merge in applications that fall under the label of “mixed reality.” One in five companies has a VR/AR initiative underway, whereas a slightly higher percentage (23 percent) is experimenting with VR/AR pilots.

The global market for VR/AR is projected to grow from $9.9 billion in 2016 to $296.5 billion by 2023, according to Energias Market Research.1 Increased investments in research and development (R&D), increasing demands of handheld and mobile devices, and growing demand in the healthcare and commercial sectors are expected to drive the growth.

The most common current use is in employee training, which 62 percent of early adopters cited. Interestingly, half of early adopters are using VR/AR in customer engagements. Other early uses include virtual meetings (47 percent), R&D simulations (45 percent) and on-the-job information—delivering information to an employee while he or she is engaged with a task (43 percent).

Employee training and meetings are activities that are already highly visual, so it’s natural to think about creating virtual environments in which these activities can take place. Similarly, computer-aided simulations already take place in many R&D shops, so extending this with VR/AR technology makes sense. As they gain experience with VR/AR, some businesses will expand their use to include customer engagement. Retailers Lowe’s and The North Face are two examples of companies that have taken this step, rolling VR solutions that place customers into virtual environments, such as a renovated home or a desert.

As with many new technology projects, cost is a major inhibitor. VR is likely to drive more upfront costs than AR, because entirely new systems must be purchased and built out for VR.

Additionally, increased demand for technology leads to increased support needs. With a strong, real-time component, VR/AR will create unique support demands to fulfill user expectations. Integration will also present unique challenges. Rather than simply presenting a new visual experience, organizations will want to capture new types of data to understand how the tools are being used and where they might create new business value. 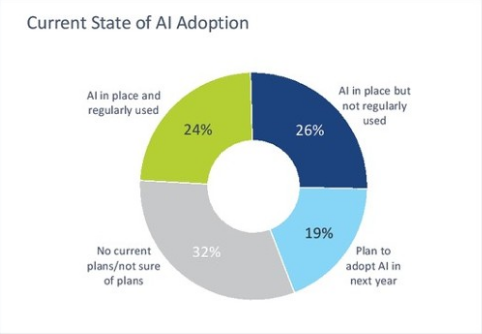 Of the many new technologies on the horizon, perhaps none has as much history as AI. Its academic origins trace back to the 1950s, but appearances in science fiction throughout the past century have helped to embed AI in mainstream consciousness.

This familiarity is reflected in relatively high awareness among businesses—63 percent in the CompTIA survey are aware of AI, and three in 10 organizations say it’s having an impact today.

Research firm IDC projects that worldwide spending on cognitive and AI systems will reach $19.1 billion this year, representing an increase of 54.2 percent over the amount spent in 2017; it will grow to $52.2 billion by 2021, for a compound annual growth rate (CAGR) of 46.2 percent over the 2016 to 2021 forecast period.2

It’s no great surprise to see that, in many cases, AI is tied to another emerging technology—namely, the Internet of Things (IoT). Among early adopters, 53 percent are using AI in machine learning within an IoT implementation. The complexity of IoT systems practically demands some form of automation and network learning. Although certain benefits of IoT can be gained from simple implementations, large-scale systems will likely include AI as part of the solution.

AI is also finding its way into standard parts of technology architecture. Infrastructure components, such as firewalls and routers, are now enhanced with AI functionality. Some end-user applications are using AI to provide suggestions to improve quality and usability.

Regardless of whether companies have started to explore AI, there are concerns and challenges associated with implementing the technology. Topping the list is a fear that harks back to sci-fi depictions of AI: a lack of insight into AI decision-making. The fear is more prevalent among non-technical workers—40 percent of executives and 44 percent of employees, as compared to just 36 percent of technical staff members.

Roles are reversed when it comes to the second challenge in implementing AI. Consumer experiences with technology have created a perception that new products have minimal support requirements. That might be why just one-third of executives surveyed are worried about supporting new AI capabilities; however, among technical staff members, 43 percent feel this will be a significant challenge. 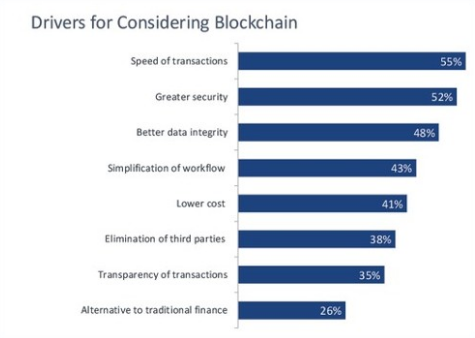 The rise of Bitcoin has rapidly led to interest in blockchain—the underlying technology behind emerging cryptocurrencies. However, that interest hasn’t necessarily translated to knowledge, as just one in five executives surveyed by CompTIA is aware of what blockchain is. Still, a technology with the capability to redefine the concept of currency—and disrupt the financial system—must have other business applications.

Blockchain functions more as a building block, rather than as a tangible product. At a high level, it is a method for recording transactional information. Rather than keeping a record of all transactions in a central location, blockchain utilizes a distributed ledger. For a given activity, a copy of the full ledger, with all transactions, is kept on each node in the network. This method provides certain benefits over centralized forms of record keeping, including transparency of data and no single point of failure.

However, the distributed nature of blockchain also highlights one of its primary adoption challenges: Blockchain implementations utilize a broad network; and replacement of a centralized record-keeping system requires the participation of everyone in that system. A large organization with an internal system could take on its own blockchain project. A system with multiple parties and an independent central agency requires coordination and cooperation.

This highlights the potential disconnect for blockchain: Although it might become highly valuable as a foundational mechanism for transactions for some, it might not be a tool that most businesses use directly.

As is often the case with early-stage technologies, there is a tight clustering of potential use cases for blockchain.

Security is experiencing disruption as organizations reevaluate their approach. So, it’s no surprise that firms are exploring blockchain as a way to confirm digital identity or keep an audit trail for compliance purposes.

Common business practices, such as asset management and contract agreements, might also benefit from blockchain. The potential is there to remove unneeded layers from processes, making them more streamlined. Companies are also exploring the use of blockchain for distributed data storage.

A study by McKinsey & Co.3 posits that 60 percent of all occupations have some duties that, to some degree, could be automated. Automating a subset of duties does not directly correlate to job elimination, but there is no doubt that some occupations are at risk. Most experts, though, believe that the digital economy will feature new roles for humans, working in concert with intelligent systems.

The number of companies that are pursuing automation in some way is evidence that automation is more broadly applicable than most emerging technologies currently are. Overall, 81 percent of companies in CompTIA’s survey have automation on their radar screens. There are some interesting differences, though, when looking at different segments of the population.

Small businesses—companies with fewer than 100 employees—are the likeliest not to be exploring automation. This is perhaps not surprising, as small businesses are often resource-constrained, and they lag in their use of technology (unless they are startups).

One might expect large companies (500-plus employees) to lead the pack in aggressively pursuing automation. The reality, so far, is that they are looking to automate certain processes selectively. This might be because they’ve already automated simple tasks, and they’re moving out to more complex processes. Or, because of the greater emphasis on realizing return on investment (ROI) for new technology implementations, they are carefully evaluating processes as candidates for automation.

Cost cutting is typically the top benefit that companies hope to realize when new technologies are deployed. So, it is noteworthy that companies highlight a desire to reduce mistakes as the top benefit they hope to achieve through automation. Human errors can throw a wrench into the operations of a digital business; therefore, the desire to eliminate missteps in processes that should have predictable results is understandable. Lower costs and greater productivity, respectively, are the second and third most often mentioned perceived benefits of automation.

Automation suffers from the same problem faced by most emerging technologies: As capabilities get closer to something once only imagined by science fiction, concerns get closer to the worst that people have imagined. With automation, as with artificial intelligence, the primary fear is that the machines will take over, leaving humans with no jobs.

However, the net result of technology on jobs is uncertain. Just as, in the past, technology has eliminated some roles, it also has created others. Even now, as loss of jobs is the top potential drawback to automation, the second biggest challenge is expected to be additional support needed for infrastructure, optimizing the behavior of automated processes and integrating the different pieces of the system.

Interest in emerging technologies, such as the four discussed, has risen dramatically as companies seek competitive advantages. At the same time, the benefits of these technologies must go beyond improvements to standard operations and drive corporate goals.