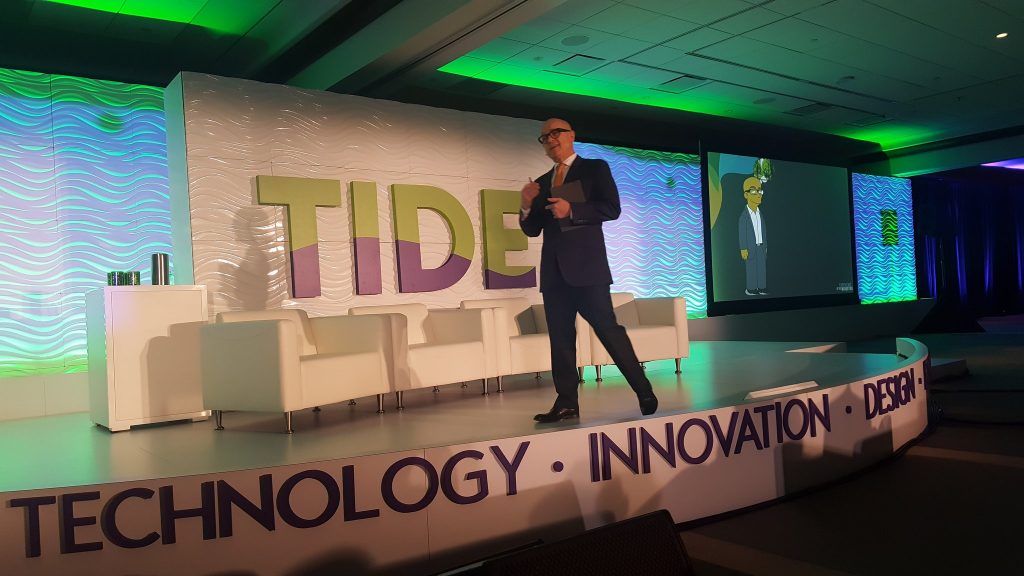 The TIDE conference, produced by AVIXA, is a one-day thought-leadership event held in Las Vegas NV the day before InfoComm and in Amsterdam, The Netherlands, before Integrated Systems Europe (ISE). This year’s TIDE Las Vegas featured insights for designers, brand marketers, architects, integrators and live-event producers, focusing on Human-Centered Design (HCD) and its impact on AV experiences. The schedule was composed of a steady stream of creative and intelligent speakers who brought unique perspectives from outside the AV space. Three breakout sessions complemented the lectures throughout the day, allowing attendees to dive deeper into the themes explored at TIDE in a more one-on-one setting with the presenters.

The day started with Shared Studios’ Amar Bakshi, who spoke about his company’s Portal network project, which uses shipping containers spray-painted gold and equipped with the AV technology needed to transport viewers around the world. Portals connect communities in an intimate way—not in anonymous forums with time-stamped posts, but, rather, in live interactions where users are standing right in front of each other, full-body. A common use of the Portals is to share performances, helping to promote empathy between different cultures, powered by the same technology commonly used for videoconferencing.

At a breakout session later in the day, a Portal Curator for the Milwaukee WI and Chicago IL areas told his story of how his neighborhood—the ZIP code with the highest incarceration rate in America, at the time—was changed by this connection to the outside world. Portals become part of the community they are placed within, and they serve as a space for people to connect and interact with each other. From premise to application, this technology has the user at the center of its design.

Following the wholesome story behind the Portal network was the first keynote of the day. Dr. Beau Lotto, Neuroscientist/Founder, Lab of Misfits Studio, presented, “How to Deviate: The Neuroscience of Seeing Differently.” Lotto presented a series of tests on perception that had audience members questioning their own survival instincts (when they couldn’t spot a predator lurking in a jungle image), or their very senses (when reality failed to match with their perception, which happened often).

In one example, attendees were presented with two white dots—one surrounded with a grey box, the other a black box. Most audience members were convinced that the two white dots were different colors, because of the shifted context that surrounded them. Another example had a video of a man biting his lip, making a “fa” sound, and then flat-lipped, making a “ba” sound. When the audience was asked to close their eyes, the sound turned out to be the same. The point of the exercises was to show that perception relies on individual history and context to subscribe meaning to data that, inherently, has none. Lotto’s keynote served as a great foundation for the day’s theme of HCD, disrupting assumptions about how experience is filtered through the human mind, and how perception can be altered.

Now that the audience was equipped with a better understanding of human perception, Rebecca Destello, UX Researcher at Facebook, gave an introduction to HCD. According to Destello, the difference between products that have HCD at their heart and those that don’t is obvious. To illustrate this, she pointed to the common TV remote with a maze of buttons, or elevators that have non-standardized button layouts. Destello explained that HCD is a framework that can be applied to any problem space. HCD is the set of steps it takes to understand a user’s goals and needs, and then design around that data. The steps she laid out are as follows: research your users, brainstorm ideas to fix user problems, prototype for feedback, launch the product and continue to iterate. The key is to keep the user at the center of every design decision.

Rana June, CEO, Lightwave, presented the next keynote, “Invent the Future: The Rise of Emotional Technology.” June explained that technology is becoming much more natural, but the ways that we measure engagement—the practice of tracking clicks and “likes,” or the simplistic emoji reactions on Facebook posts—haven’t caught up yet. She impressed upon TIDE attendees that they have to move to the next level, where measuring emotion will become part of the analytics relied upon by the AV industry. As a surprise at the end of TIDE, June shared artwork that she created using the audible crowd reactions recorded throughout the day. It was a concrete example of natural analytics gathered at a live event and a unique technological application of human emotion, befitting the theme of the day.

There was, of course, much, much more content at TIDE, and the overall response was very positive when all was said and done. A common thought overheard after the show was that TIDE represents a great way to focus on the bigger picture behind AV applications. The conference helps us keep in mind that InfoComm is not just a slog from one booth to another, but a journey to find the best tools to create the best human-centered solutions.