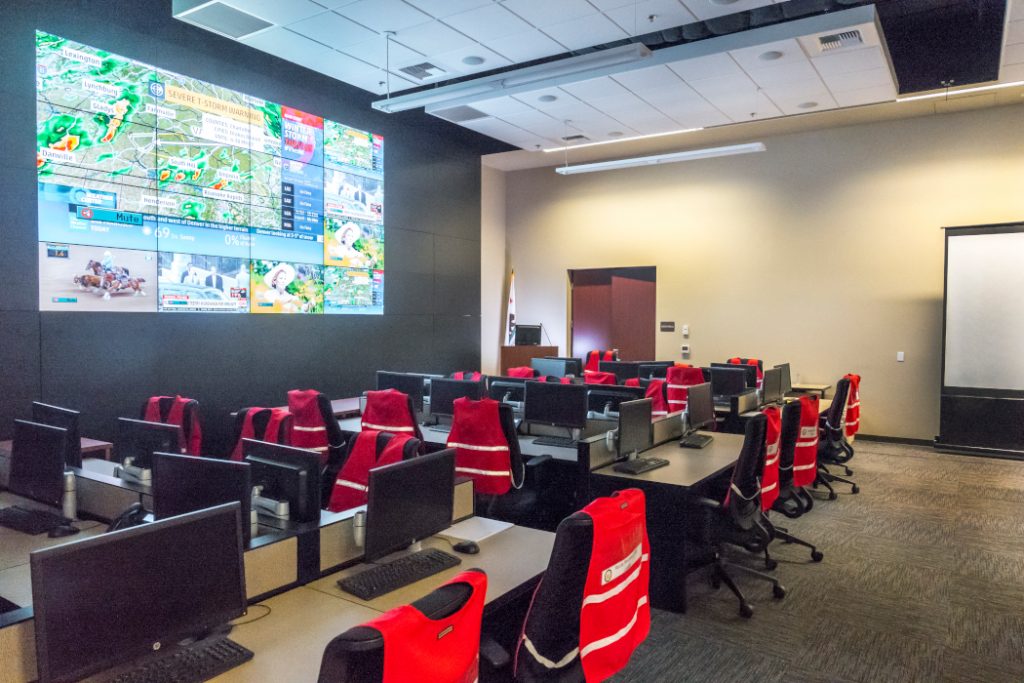 As any security professional will tell you, it’s a never-ending job. You’d certainly hear the same from the professionals who staff the hundreds of state and county emergency operations centers (EOCs) that dot the US. At one, in particular—in Riverside County CA—it’s the EOC itself that’s preparing for its future, laying an infrastructure foundation for future upgrades from day one. The facility, which was originally budgeted at $1 million, but which was later value-engineered to about two-thirds that amount, is a continuing work in progress. As John Bilar, VP of Technology at Spectrum ITC Group, the consultancy that designed and specified the project, said, “[It’s] a marathon, not a sprint.”

The project took a former sheriff’s office substation in an existing county building and adapted it as the county’s second EOC, dubbed the East County EOC, located in Indio CA. It’s intended to act either independent of or in concert with the EOC in the city of Riverside CA, which serves the west side of the state’s fourth-largest county. (They are connected via WebEOC, a proprietary, web-based crisis-management software that also loops in other local agencies, such as fire and police, for coordinated countywide responses.)

The East County EOC’s preparations for future upgrades are reflected most immediately in the room’s videowall, which is composed of a 4×4 grouping of 16 NEC 55-inch displays, although the design specification calls for that wall to have a total of 32 such displays. As part of the initial phase of the project, all 32 displays have been provisioned for in the form of cable infrastructure behind the wall, with the additional displays to be added in a second phase that has yet to be officially scheduled. “The best time to put infrastructure in is at the very beginning, when the walls are already open,” Bilar stated.

The East County EOC might have been the second such facility in Riverside County, but it’s not “second city” by any means. Brooke Federico, Senior Public Information Specialist for the County of Riverside Emergency Management Department, which operates both facilities, said that the East County EOC is the first with a videowall. It’s drawn appreciative notice from the journalists who’ve viewed it, as well as from those who’ve used the venue for training and situation monitoring.

Of the two facilities, the East County EOC is located closer to the annual Coachella and Stagecoach music festival sites, both of which are in Riverside County. Last year, during the festivals, the East County EOC was activated and worked with local fire, police and EMS in a standby mode. According to Federico, however, the most important thing is the EOC’s ability to take in, manage and display a multitude of critical AV sources flexibly during emergencies.

“[This space has] given us the ability to monitor a wealth of sources in a single place, from which we can better manage anything that needs immediate attention,” Federico affirmed. “The videowall is great, and we’re very happy with how the entire facility operates. Whenever we’ve needed it, it’s been ready.”

The wiring and infrastructure stage was also when the AV integrator on the project, ENKO Systems, based in San Bernardino CA, was brought in. The team found the space to be “a blank shell,” according to Greg Martin, AV Systems Engineer/Programmer on the project. That’s something that many integrators would usually welcome. However, as budget reductions compelled value-engineering-based revisions, the integrator had to find clever ways to accomplish a great deal, while spending less. “The first challenge was how we would be able to build a wall that took in many different sources—from cable, to satellite, to over-the-air (OTA) video, as well as AM and FM radio and streaming—and let them all be viewed and controlled easily,” Martin recalled. It was a hurdle with multiple facets, beginning even before the first run of copper was put into place. (In fact, budgetary constraints compelled the use of copper throughout, rather than using the Dante network format.) Bilar recalled having to battle with the local satellite and cable providers about something that residential customers surely understand—unbundling unwanted channels.

“The first thing they asked us was, ‘How many television sets do you have?,’ as if this was someone’s living room they were putting cable into,” Bilar recalled. “It was hard to get them to understand that we needed a drop with a very specific bunch of [news and information] channels, including broadcast channels.” This had to take the form of what’s known as a Clear-QAM—a modulation scheme that allows the RF transmission of digital TV channels in the clear (i.e., unencrypted and unbundled from other cable or satellite channels). Those channels would provide backup for the OTA iterations of the same channels, which had to rely on external antennas—hardware that is vulnerable to lightning strikes in Indio’s desert location.

“We actually had to go to the local franchise authority to make that happen,” Bilar continued. And Martin recalled Dish Network being particularly obtuse on the matter, with the satellite service’s technicians and sales personnel unable to see past residential-type customer needs. “They asked, ‘Where’s the television?’ and we said, ‘It’s in the rack, and there’s 32 of them,’” he sighed. “It was a learning experience.”

Video sources also play a large part in the programming of the EOC’s control system, which is centered on Crestron’s DigitalMedia (DM) platform. Martin said the challenge here was organizing the multitudes of inputs, and the variety of formats they come in on, in a way that would be intuitive to the EOC’s users. Given the nature of emergency facilities that might be unused for months at a time, users might not have training on—or even a passing familiarity with—the systems. However, in the event of an emergency, they will have to get up to speed on them in possibly a matter of minutes. (The facility was activated as recently as this past November, when a voluntary flood evacuation was issued for San Jacinto Mountains communities in the area of last year’s Cranston fire.)

Martin, working in tandem with his colleague, certified Crestron programmer Robert Conrad, programmed the control desk’s large Crestron touchscreen to use the logo icons for individual cable and broadcast networks, whose news broadcasts would supply the EOC with much of its operational information. If a user wants to see what ABC is reporting on a particular matter, he or she simply touches that particular button—with the network’s logo on the screen—after being granted permission by a facility manager. That same control screen allows the facility manager, seated at a separate desk in the rear of the room, to configure individual screens in a picture-in-picture format, mimicking how the main wall’s array of 16 screens can be configured. Those options include a single 4×4-unit videowall display, four 2×2-unit displays and a 3×3-unit display, with the remaining screens available as supports around it. Those options can be effectuated by the user simply by selecting a screen format on the master controller.

Users can also choose from which video source to view a chosen input. For instance, if the ABC network feed from the broadcast input fails, then the user can instantly switch to that same network through the satellite feed. “They never know when this room is going to be used or who is going to use it,” Martin declared, “so the programming is designed so that you don’t need a CTS credential to operate it.” All that content will come up on the screens in one of the six “pods” of eight seats, which are arranged around rectangular desks in the middle of the room. Each seat faces an NEC 42-inch monitor on a Chief swivel mount, connected to the five main control racks through a Crestron DM receiver. Each pod has one of those monitors assigned as the master screen for that table. In addition, each seat in the pods has an Extron audio matrix switcher, which enables the user to choose an audio source that can be listened to through a pair of beyerdynamic DT 102 headphones. In addition, JBL Control 26CT ceiling speakers, which are powered by QSC two- and four-channel amplifiers, provide sound for the entire room.

Both audio and video can be accessed using a similar touchpanel controller, or other device, in any of four satellite rooms (adjacent to the main EOC) that are used for utility applications, such as huddle spaces or meeting rooms. That content comes in through coaxial cable. (The cabling in the pod area took long enough that Martin, who worked on it during a Community Emergency Response Team (CERT) training session, which was held in the EOC early on, actually became CERT-certified himself!)

Much of what enables all the functionality described is below everyone’s feet, under a paneled floor and atop a slab that had been saw-cut and lowered, creating an 18-inch-deep space for cabling. And there was plenty of it, according to Martin, who estimated the project team installed more than 100,000 feet of wire for audio, video and control applications. However, because copper constituted the bulk of the wire type, care had to be taken in placing which cables where. For instance, RF-shielded coaxial cable was placed in a 16-to-18-inch-wide wire basket on the far side of the under-floor space, with video cabling on the other side of the basket, as far apart as possible; that was to reduce the potential for interference. The analog audio wires were run up the middle of the baskets, and, anywhere they crossed, the wires were bent at right angles to minimize crosstalk. All the wire baskets were laid atop grounding strips, and the entire control and rack were enclosed in a halo ground system, connected at each corner of the room to an external earth-ground electrode via a separate grounding bus bar installed by an electrical subcontractor. “The EOC is out in the middle of the desert, where the air is very dry, and there are no tall buildings near it,” Martin explained. “It’s a real target for lightning strikes.”

The East County EOC’s equipment choices were initially laid out nearly five years ago, reflective of the time spans that government projects can cover. However, according to Bilar, a former AV integrator himself, equipment choices for EOCs tend to be based on what has worked in those environments before. “EOCs are not the place to experiment,” he cautioned. He also used a previous project he worked on for the city of Los Angeles CA’s EOC as a kind of template for Riverside County, scaling things to fit the latter’s size and budget. At the same time, however, he always kept future expansions and upgrades in mind, with provisions to “bag and tag” some of the cabling to be installed for future applications.

Although the East County EOC will have its videowall filled out at some point in the future—there are also tentative plans to add other features to it—the facility, as it is, is more than equal to its tasks. Its copper-cable infrastructure is as robust as it needs to be, Bilar affirmed, noting that the installation techniques, such as quad shielding and extensive grounding, are as reliable as any networked infrastructure is.

“As the events of the last several years have shown, EOCs are going to be used more, not less, and they will have to manage a lot more information in real time,” he observed. “This facility can do all that. The cabling and interfaces for future phases are already in place as part of my baseline design, so they just need to hang ’em and hook them up. It’s ready to do more when the time comes.”

List is edited from information supplied by Spectrum ITC Group and ENKO Systems.