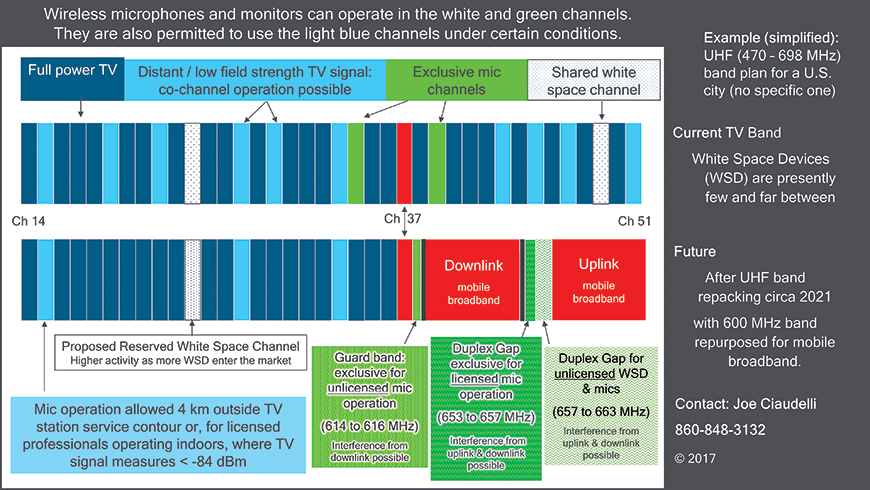 The Federal Communications Commission (FCC, or the Commission) incentive auction might be over, but the audio industry should not become complacent. A major issue still pending is the reserved vacant channel proceeding. As part of the overall plan to repurpose the 600MHz band, the FCC proposed to reserve one 6MHz-wide ultra high frequency (UHF) channel in every TV viewing area throughout the United States for use by wireless microphones and white space devices. The FCC issued a Notice of Proposed Rule Making regarding the reserved channel back in June 2015, but it has yet to make a final decision.

Importance Of The Reserved Channel

Most wireless microphones, especially those of professional grade, transmit in locally vacant TV channels, commonly referred to as white space channels, primarily in the UHF range. This is because UHF has very favorable characteristics, including signals that can travel through walls, devices that achieve extended range from low transmitter power and devices that use compact antennas. Many wireless microphone applications can be accommodated using frequencies outside of UHF. However, hyper-critical applications, such as a live event broadcast to millions, are best served using UHF channels that are clean (i.e., free of noise from other services).

Currently, there are two microphone reserved channels in each geographic market, but they are being eliminated as part of the 10-phase 600MHz transition plan that is scheduled to conclude by July 13, 2020. Thereafter, portions of the forthcoming guard band and duplex gap in the 600MHz band will be available for the exclusive use of wireless microphones (see Figure 1). However, power output of wireless microphone transmitters will be limited to 20mW effective isotropic radiated power (EIRP) when operating in the guard band or duplex gap.

Given that the guard band and duplex gap are buffers to control interference between adjacent services, there might be high out-of-band emissions (i.e., noise) from those services. Therefore, the possibility of interference to wireless microphones operating in those bands might be high—especially considering the low 20mW microphone power limit. (By contrast, permitted output power for wireless microphones in UHF TV white space channels is 50mW and 250mW for unlicensed and licensed operation, respectively.)

The incentive auction was conducted to repurpose spectrum from traditional over-the-air TV broadcast to mobile broadband. Unlike the former, the latter has inherent incompatibilities in sharing spectrum with wireless microphones and similar devices. Not only will wireless mics be losing access to the majority of the 600MHz band, but, in addition, some TV stations that are currently transmitting in that band will be moved to lower channels. That will further congest the 470MHz to 608MHz range that will remain allocated to TV and, in turn, to wireless mics. Therefore, the reserved channel was envisioned as an oasis for wireless mic operators, especially in urban areas, where it might be the only UHF TV white space channel in the market.

White Space Devices (WSD)—formerly known as TV White Space (TVWS) or TV Band Devices (TVBD)—are a relatively new class of unlicensed equipment that also, like wireless microphones, operating on unused TV channels. WSD deployment thus far has been slow, but, in large part because of Microsoft’s interest in the band, it’s expected to accelerate rapidly. WSD manufacturers also favor adoption of the reserved channel. A primary argument they put forth is that the reserved channel is an essential element of a WSD ecosystem that can provide high-speed internet service to millions of Americans in rural areas. In that use case, there is symbiosis with wireless microphones that tend to be operated in areas that are more populated.

The FCC incentive auction had a multi-stage structure designed to repurpose up to 144MHz of TV band spectrum, depending on various scenarios. When a stage failed to reach certain criteria called the “final stage rule,” a new round begun, offering less spectrum. The auction went through several rounds over the course of a year, and resulted in only 84MHz (614MHz to 698MHz) of spectrum being repurposed. The uncertainty of this final result was likely an initial reason that the Commission refrained from making a decision on the reserved channel proposal, perhaps waiting until a clearer picture of the ultimate spectrum landscape became apparent.

Another factor has been low-power television (LPTV) stations, which play an important role in many communities. Some of these stations are being displaced out of their channels. Unlike full-power TV stations, LPTV stations are not receiving compensation funds to move to a different channel. Therefore, some are likely to cease operation. The number that will remain on the air is unknown until the Commission receives new applications within the submission timeframe. Some have argued that the sole white space channel in a market should be granted to displaced LPTV stations that are unable to find replacement channels, as opposed to being reserved for wireless mics and WSD.

In the meantime, there have been a number of significant changes in the political landscape in Washington DC, including within the FCC. The FCC is led by five commissioners, generally two Democrats, two Republicans and a Chairman whose party affiliation is determined by the party that currently holds the White House. So, prior to this year, the Democrats were the majority party on the Commission; now, it’s the Republicans. The new FCC Republican leadership might reconsider the proposal to reserve a channel for wireless microphones and WSD.

The reserved channel proposal was devised as part of a larger plan, in an attempt to strike a balance among several interests. It should be adopted to maintain some level of equilibrium between providing spectrum for content distribution and content creation.

The repurposing of the 700MHz band a few years ago and the 600MHz band now have centered on the distribution of content. Adequate spectrum is also required for the creation of content. Regardless of whether you experience news, entertainment or emergency alerts through your TV, radio, smartphone, tablet or computer—or at a live event—if it has audio, then most of it was captured with wireless microphones. Thus, hundreds of millions of Americans benefit each day from wireless microphones.

More content is being created today than ever before, and the US is the undisputed leader. In fact, our content has a three-to-one export-to-import ratio—by far the highest of any American product or service. Content creation comes from a wide variety of companies, artists and engineers. This broad demographic fuels the robust growth of content creation and reflects a healthy contrast to the commoditized distribution of content controlled by a few mega-corporations.

Bottom line: Wireless microphones aren’t merely a convenience; rather, they are essential tools that fuel the content-creation ecosystem. They are also indispensable in civic life, in use at virtually every assembly facility, public and private.

Licensed wireless microphone operators would have priority in the reserved channel, as they have in any available TV white space, and they can register their productions for interference protection in the white space database system. When not required by a licensed operator, the reserved channel would be heavily used by unlicensed wireless microphones and WSD, thus fulfilling the Commission’s general goal of efficient use of spectrum.

What You Can Do To Help

Write to the Commission to encourage the commissioners to approve the proposal to reserve at least one white space channel. The letter should be printed on your company letterhead or, for an individual, include your address and contact information. It should reference MB Docket No. 15-146 and GN Docket No. 12-268. Provide a brief description of how you use wireless microphones and the importance of having a reliable UHF channel for your productions or operation. Letters can be filed electronically via the Commission’s website: www.fcc.gov. Alternately, you can submit ready-to-file letters in .pdf file format to info@spectrumaffairs.com, along with a note to “please file on my behalf with the FCC.” We will make certain it is submitted properly, for no charge and with no obligation.