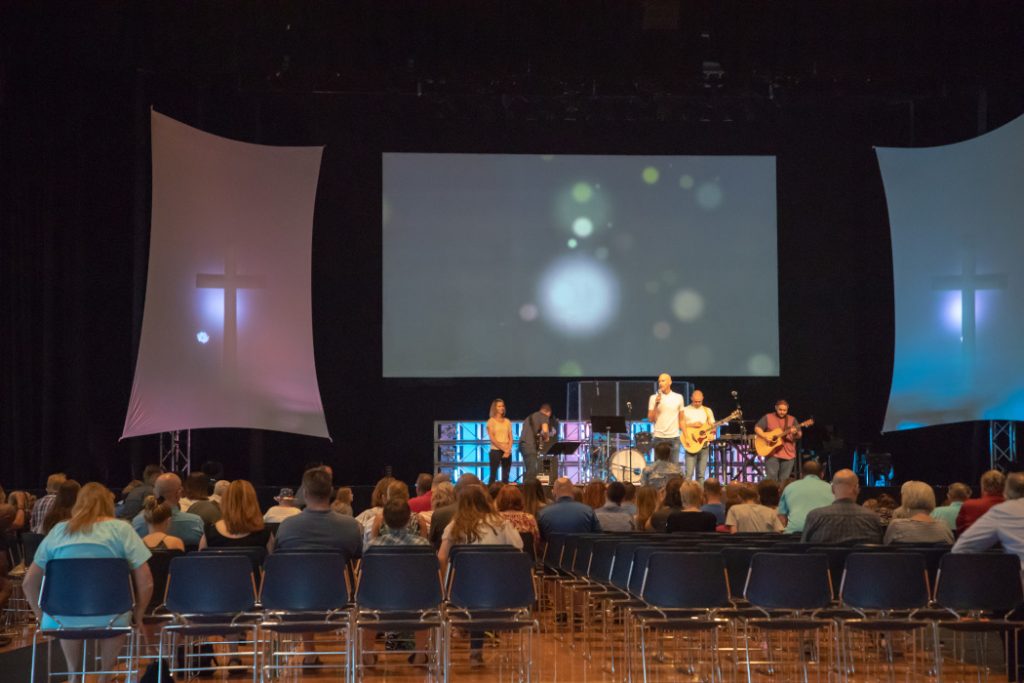 Although Christmas might be the holiday most closely associated with the Christian religion, Easter elicits the bigger celebratory response. “It never fails,” Brady Davis, Director of Sales for Force Technology Solutions, affirmed. The AV integrator is located in Greenfield IN, a suburb east of Indianapolis IN. “This year, we had two churches that needed large sound systems installed by Easter, and we made the deadline on both,” he continued. “It was quite a busy Easter for us, as usual!”

One of those houses of worship was Eagle Church, which is located in Whitestown IN, a short ride on the I-465 loop to the northwest of the city. Eagle Church presented the integrator with an increasingly common challenge: a fan-shaped seating area in a sanctuary that’s far wider than it is deep. It’s an aspect ratio that creates significant coverage issues for live sound.

The interior of Eagle Church’s contemporary-style structure is 145’Wx85’D. The space is large enough to accommodate three high-school-sized basketball courts—which, when it’s used for sports by the church’s members, it does— and it’s big enough to seat nearly three times the church’s usual Sunday complement of about 700 worshippers. That gap between building size and current congregation size underscores the church’s ambitions for expansion. (“You have to understand the relationship between basketball and Indiana,” Davis, a native Buckeye, said, although he added fervently that he’s really a Hoosier at heart. “It affects everything, including church.”)

Davis said he’s become very familiar with this type of seating design and architecture, and he understands the reasons for it. “Churches now are actively pursuing this type of seating design—fan-shaped, wide and shallow—because more of the congregation can see the pastor or preacher up close, without the need for image-magnification (IMAG) video,” he explained. “The challenge, however, is sound coverage—it’s difficult to reach every seat to the far left and right. But that’s what they expect you to be able to do.”

Davis said his staff and he, using the EASE program, surveyed the space, noting its 36-foot-high ceiling and the fact that music for a typical Sunday service is expected to reach an SPL of 90-plus decibels. “Music plays a vital role in their services,” he noted. Davis said the integration team considered possible solutions from a narrow group of PA brands, with choices limited by the ability to disperse widely on a horizontal plane. “Most loudspeakers have a 90-degree coverage pattern, so we were looking at solutions that could give us a wider pattern,” he explained.

There was an additional complication, however. The church, Davis discovered, specifically wanted a left-center-right (LCR) array, with a center channel largely dedicated to speech and vocals. “They were very specific in wanting a system that would keep people in the seats focused on the pastor when he was speaking,” he remarked. “He mostly stays in one place onstage during the sermon, so they wanted the speaker to reinforce his location on the stage. That’s what the center speaker array does.”

Those requirements narrowed the field even further. Ultimately, both the integrator and the church decided on a system that consists of WorxAudio XL1 two-way line-array loudspeakers, V5 compact line-array enclosures and TL218SS extreme-high-SPL extended-bass subwoofers. The new sound system makes use of two flown, nine-element WorxAudio XL1 loudspeaker cluster—one each for the left and right sides of the stage—and a center cluster that consists of eight WorxAudio V5 compact line-array enclosures. Low-frequency support is provided by six WorxAudio TL218SS subwoofers, flown in two three-box end-fire arrays suspended just slightly above and behind the center V5 loudspeaker hang.

The church knew it needed a new sound system. Justin Langebartels, Eagle Church’s Worship and Missions Pastor, said it didn’t take an expert to realize the existing system had coverage problems related to the room’s dimensions; as a result, there were hot spots and dead zones throughout the seating area. “It was fine if you were seated in one of the few rows that were well covered,” he said, “but that wasn’t going to work going forward.”

Langebartels said the church’s decision committee, which included him and several of the most knowledgeable volunteers (the church does not have a technical director on staff), looked at bids from three integrators and their recommendations for PA system brands. That, of course, included Force Technology Solutions and the WorxAudio system it recommended. The baseline requirement was that any new system meet current touring-level standards for quality. The combination of a demo from WorxAudio and the price point helped to seal the deal.

Langebartels added that, although the WorxAudio brand was new to Eagle Church, its team was familiar with the equipment produced by parent company PreSonus; that served to alleviate any anxiety about choosing a newer brand. “We did the research on it,” he explained, noting that there are no other churches in the area with similar dimensions and, thus, nowhere local to look for comparisons. “We’re pretty unique in the area in that way,” Langebartels added, “so the demo and the lower price made a huge difference.”

Davis said the products turned out to be a very good choice, citing the XL1’s 160 degrees of horizontal dispersion. “The L-C-R design of this system allows the left and right hangs to cover the entire facility, with the center V5 hang providing additional vocal support,” he explained. “Most of the speech is in the center speaker, but we have some going into the left and right arrays to reach the farthest sides of the room. In addition, we have three X1Mi-P powered monitors used as fills around the front area of the stage to address the closest rows of seating, and that are positioned to help direct attention to the center of the stage.”

The new sound system integrates with other, existing components that were already in place. Those include a Midas M32 digital front-of-house console, a Shure ULXS wireless microphone system and a Behringer Powerplay P16-M digital stereo personal monitoring system. “They opted to put more of the budget into buying and hanging the sound system,” Davis affirmed

The sound system uses networked audio as its primary signal transport; specifically, audio leaves the console through a Dante expansion card in the board and travels over a QSC Q-SYS network using Belden Cat6 cabling, with a Q-SYS Core 110f as the processor. Davis said the system design is intended to minimize the number of AD/DA conversions the signal has to undergo between the console and the speakers. (Using powered speakers further eliminated one conversion point between the console and the amplifiers.)

“We’ve found that, as the number of conversions increases, so does the noise floor, while the dynamic range decreases,”
Davis explained. “Doing it this way preserves dynamic range and increases fidelity.” Davis added that a networked sound system also allows for easier expansion of the system, if that proves necessary in the future. Force Technology Solutions also installed a coppercable failover backup for the system, in the event a network switch in the Q-SYS network were to fail.

The Q-SYS system also provides basic configuration control over the system’s tuning. Force Technology Solutions programmed two basic modes of operation—one for typical Sunday services with music, and one for music alone. The latter adds about 20 percent more headroom to the system’s output, taking it up to above 98dB, with the intent that the venue would eventually be used for concerts. The system also provides the delays for the three X1Mi-P monitors used as fills around the front area of the stage, which support speech reinforcement.

Davis said that the PreSonus Commercial Division helped on that score. “Tony Flammia, Director of the Commercial Audio Division, even made a second trip—at no additional cost to us or the client—to retune the system,” he added. “We’ve always been very pleased with the service and support that PreSonus has given us.”

Another area that often presents some challenges, in this instance, did not. As it turned out, the church’s design committee had planned for music concerts; therefore, a full rigging plot was built into the ceiling, complete with an engineer’s report that the integrator used to hang and position the three main arrays. “We just needed to add some theatrical beam clamps and use the WorxAudio fly bars,” Davis noted. “It was very easy to hang.”

The subwoofer array, by contrast, was a bit more difficult. Davis agreed that six subwoofers represented about double what he would have recommended for the room, given these subs’ SPL capabilities. However, he said, the client was adamant that the subs be flown along with the rest of the system, instead of ground-stacking them, so as to make it easier to reconfigure the stage for sports or other applications. “So, we placed the subs above the center array, in order to avoid low-frequency hot spots,” Davis explained. They hover nearly 35 feet above the ground and over the center array, which tops out at about 30 feet above ground. “And we used the end-fire configuration to get more of the power out and down to the seating level and away from the stage,” he concluded.

Like most churches, Eagle Church is a work in progress. Langebartels said it is now looking at bids to add video to the building—something it has none of at the moment—and its lighting grid and console are due for updates in the near future. “But the sound is fantastic now,” he enthused, “and that’s a great start.”