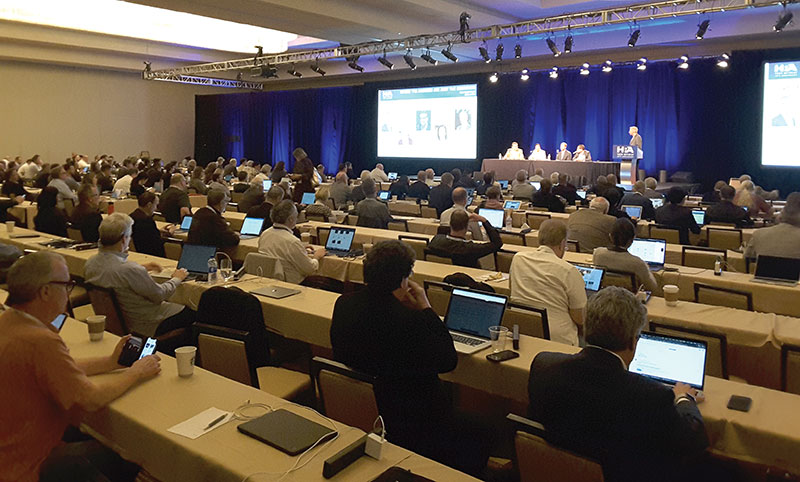 I’m writing this column after the third breakfast roundtable of the annual Hollywood Professional Association (HPA) Tech Retreat in Rancho Mirage CA. The Tech Retreat, which celebrated its 25th anniversary this year, is an annual gathering of many of the smartest minds in television and film production.

You’ll also find speakers and attendees from engineering and technology standards associations, universities, government agencies and research facilities, as well as representatives from camera and display manufacturers, software companies, and some pretty big names in internet cloud-storage services and streaming.

I started to attend the Tech Retreat 19 years ago when there were perhaps 150 attendees and a handful of companies showing off their gadgets and ideas in what used to be the “demo room.” Now, the conference attracts 600-plus registrants and the demo room—renamed the “Innovation Zone” a few years back—draws dozens of exhibitors in a mini-trade-show environment.

Each year, I provide a 30-minute summary of what I saw at that year’s CES—a daunting task, to say the least! Not only do I have to distill three days of walking the show, plus hundreds of photos and dozens of videos, into a somewhat-coherent narrative, but I also have to do it in 30 minutes or less! Technology guru (and opera historian) Mark Schubin runs the daily sessions like a live broadcast, timed down to the second. If you run over, you’re simply cut off and the next speaker comes to the podium to start his or her presentation.

In addition to my CES-related talk, I also hosted two breakfast roundtables. For each morning’s breakfast, banquet rounds with 10 chairs are set up; each table has a topic assigned to it. If you want to hear about or discuss that topic, you grab your meal from the buffet and take a seat. Some roundtables are so popular that there aren’t enough seats available. In fact, one year, my table was so full that there was no place for me to sit—and I was the moderator!

I picked two roundtable topics for 2020. The first was the expanding use of light-emitting diodes (LEDs) for displays, including televisions and cinema. Yes, we’re seeing the first LED cinemas lighting up worldwide, with two screens active in the US in Chatsworth CA and Richmond TX. Not surprisingly, we had a full table. The discussion ran the gamut of topics, including mastering cinema files for LEDs, the problems with surround-sound systems, appropriate brightness levels (see my recent column about LED cinema), and copy protection and security.

The consensus of our hour-long conversation seemed to be that LED cinema is indeed “a thing,” but it should probably be marketed and priced as more of a high-end experience (much as IMAX is) than as just another way to watch movies. Appropriately, one of my colleagues at the table subsequently presented a paper entitled, “The Theater Is Not a Big TV.” It discussed how the theatrical viewing experience differs so much from watching television at home, and that it remains a more satisfying way to take in the latest movie.

For my next roundtable, I chose the topic of 5G and wireless. There has been so much hype associated with 5G that it’s become the 21st-century version of snake oil. Despite the barrage of ads that you see on television and billboards, the “5G” that’s being promoted right now isn’t really 5G—at least, not in the sense of the download speeds that are being touted. Rather, it’s more like a souped-up version of 4G (LTE) that handles data more efficiently.

To achieve the promised 1Gb/s download speeds touted by wireless providers, we’ll have to move to much higher radio frequencies (i.e., the “millimeter wave” radio bands in the 20GHz, 30GHz and 60GHz spectra). The problem is, as we move up in frequency, the propagation distance of these radio waves is shortened considerably. And, to achieve 1Gb/s speeds, we’d have to use very wide channels (at 60GHz, the channels are 2GHz wide), but the range of transmission becomes very short (in the range of 50 to 100 feet with beam steering).

Everyone at the table concurred that expertise in the science and physics of radio frequency (RF) and wireless-signal propagation is becoming rare. (The irony is that we are so reliant on wireless that our economy would just shut down if it stopped working!) But that doesn’t stop the hype masters and marketing folks from saying that 5G will work wonders—make your teeth brighter, add 20 years to your life, help you lose 10 pounds in a week and improve your golf swing. (Well, you get the idea.)

The general sessions provide a wide range of insights, with some talks lasting just 10 minutes. (One presentation last year was all of five minutes!) Topics included the future of immersive entertainment, in-camera visual effects, next-generation security for media assets and machine languages for media content.

There were other intriguing papers, though, such as next-generation cinema production, mastering content for LED display screens, virtual production, common platforms for immersive audio and one of my favorites: “Tested Perceptual Differences Between 4K and 8K Video,” presented by researchers at Warner Bros. The research for that paper measured the responses of different viewers with 20/10 and 20/20 vision, seated five and seven feet from 4K and 8K displays, who were asked to note any differences.

Curious about the results? Testing showed that “increasing resolution from 4K to 8K under typical viewing conditions did not result in a significantly improved visual [experience]” and that “perceptual differences are highly content dependent.” In the tests, viewers seated closest to the screen “confidently rated two of the 8K clips as ‘slightly better.’” About 27 percent of the test group had better-than-20/20 vision, leading to a suggestion that “the International Telecommunications Union (ITU) revise its viewing-distance recommendations to include viewers with 20/10 or 20/15 vision.”

One paper that proved to be a real eye-opener covered photosensitive epilepsy. Apparently, sequences of bright flashing light (red, in particular) during video programs, with contrast ratios as low as just 5:1, can trigger seizures in viewers. The presenter, John Harris of Harding FPA–Cambridge Research, detailed several video programs and TV commercials that, when aired, resulted in numerous people entering hospitals with seizures. Harris discussed how high-dynamic-range (HDR) content could possibly trigger an epileptic seizure and how image grading can minimize the chances of that happening. (Even highway signs and barriers with “zebra” patterns can cause issues when they’re viewed from a moving vehicle!)

Even though the primary focus of the HPA Tech Retreat are the tools and technologies of media production, the lessons learned from the presentations are just as appropriate for the commercial AV industry. An example: Although we’re just taking baby steps in migrating to audio- and video-signal transport over IT networks, the cinema and broadcast industries are far ahead of us in demonstrating not only IT-based signal management but also shared, real-time production and distribution of content.

Indeed, on the second day of the Tech Retreat, a short 4K film was recorded, edited, graded, mixed and finished in just seven hours using both onsite and networked (cloud) resources. Dozens of attendees participated in the production, and the result was a digital cinema master and a second version produced for and streamed to everyone’s smartphones. Very cool!
Even after nearly two decades, the HPA Tech Retreat continues to surprise and inform me. I can’t wait to see the surprises in store next year….

Previous ArticleIs AV In For A Reordering?Next ArticleThe Commish: Checklist vs. Report: You really expect me to read all that?