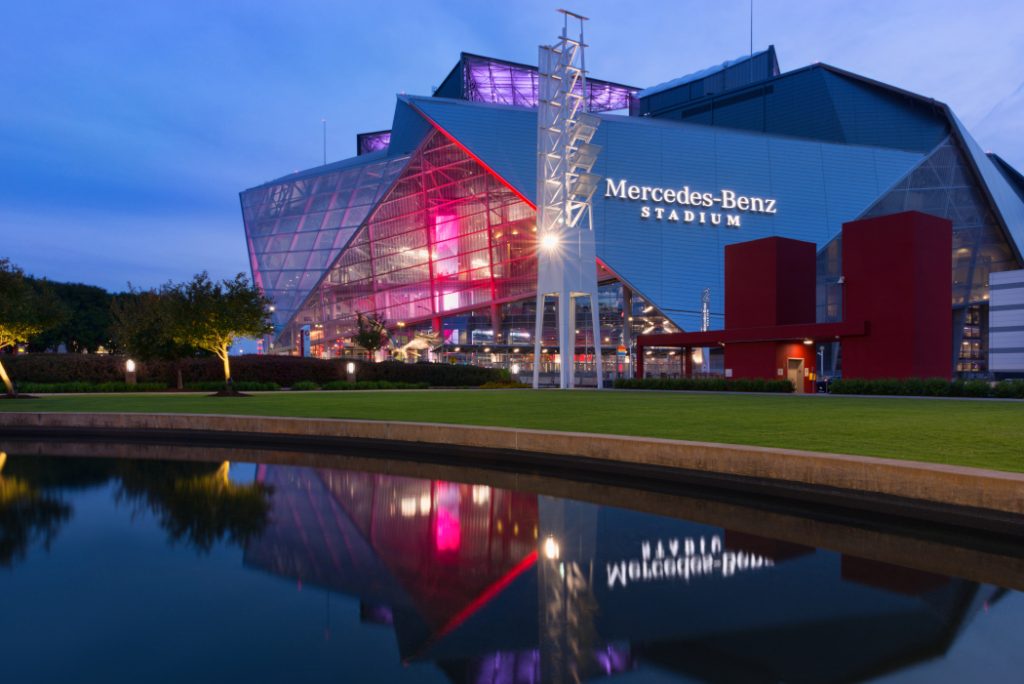 IBM gave us the PC. It gave us the ATM, the floppy disk and the relational database. It popularized the mainframe and artificial intelligence (AI) through its seemingly ubiquitous Watson platform. So, it was sort of revolutionary, to me, to hear an IBM executive recently speak like an AV professional.

I was listening to Ben Brillat, IBM Chief Technology Architect for the company’s Global Sports and Venues Services group, describe its work on the new Mercedes-Benz Stadium it Atlanta GA. And although I expected insight into the 4,000 miles of fiber, 15,000 Ethernet ports and 1,800 wireless access points, as well as the AI-driven app it built for the organization, what I didn’t see coming was his description of the stadium’s “design thinking.”

According to Brillat, it started with studying “guest experience,” moved to establishing “customer personas” and “journey maps,” and proceeded into user experience (UX)—all before turning to data management, application architecture and infrastructure. At one point, Brillat said, “We have to start this early in the design process. The physical building has to support the guest experience.” It was as if he was channeling the age-old challenge that many AV designers and integrators face when they’re asked to build a technology solution after a building has already been finished.

Mercedes-Benz Stadium does, in fact, include 2,500 displays and digital signs, 500 high-definition cameras, 3,400 speakers, 1,000 amplifiers and 90 miles of audio cabling, integrated by Baker Audio Visual and Diversified. That’s not to mention LED walls and the awesome, Daktronics-engineered, 360-degree Halo display. So, in its own right, it is an AV marvel. But what’s great is that we’re all speaking the same language here. Mercedes-Benz Stadium is a big success in no small part because all involved were focused on the experience. And the same can hold true for technology solutions in other markets—large and small—from a retail mall to an executive boardroom.

There is incredible value in listening to customers and their end users, who are often your customer’s customers. At AVIXA, we’ve been doing it a lot lately. On a different occasion, just weeks before meeting Brillat, I had a chance to tour Mercedes-Benz Stadium with members of the Association of Luxury Suite Directors (ALSD), which represents teams and operators of sports venues. ALSD has also grown well beyond suites and sports to represent organizations throughout the entertainment-venues market.

AVIXA’s CEO, David Labuskes, CTS, CAE, RCDD, got to spend several hours with prominent ALSD members to discuss fan experience and the role that audiovisual solutions play. Here’s some of what they shared:

“We have forever—since the advent of television—been chasing the in-home experience and trying to make sure that we’re always one step ahead,” Tom Wilson, President and CEO of Olympia Entertainment, said. That organization operates the new Little Caesars Arena in Detroit MI. “We have to have certain ‘wow’ moments, and audiovisual technology helps. We used to say to our television producers, ‘Show me three or four things during the course of a game that will make viewers, when they’re sitting at home, say they wish they were there, because they’re missing the excitement.'”

Did you catch the projection mapping and elaborate, pre-game spectacle before the Stanley Cup Finals games in Las Vegas NV’s T-Mobile Arena? More than one sports executive marveled to me that the AV experience was such a “wow” that, indeed, the broadcaster handling the Cup actually covered it on live TV.

Justin Wood, Principal and Sports Practice Director of Dimensional Innovations, had a unique take on the role AV plays at Mercedes-Benz Stadium. His company handles sponsor design and management for the teams that play there. “A real challenge we have with venue design right now has to do with the ‘event of the day,'” he said. “At Mercedes-Benz Stadium, you have an NFL tenant and a Major League Soccer (MLS) tenant. The demographic overlap between season ticket holders of the Atlanta Falcons and of the Atlanta United FC is in the single digits. Soccer fans want to feel like they’re in a soccer stadium, and football fans want to feel like they’re in a football stadium. The ability to leverage audiovisual technology—whether you’re in a club or a sponsored space on a concourse, wherever you are—and really flip spaces and make them feel completely different is one of the greatest values we’re seeing of technology.”

Venues are even starting to consider the experience of customers who don’t have seats! “One of the great business benefits of audio-visual technology is improving the standing-room-only (SRO) experience in arenas,” Kieran Nulty, VP of Arena Experience for the NBA’s Milwaukee Bucks, said. “We’re building a very ballpark-like concourse structure, so it’s easy to walk around, and, with an SRO ticket, you can see the live action. But there are still facilities where there’s no SRO opportunity. Some teams do such a good job handling this. They bring in 700 or 800 SRO tickets a game—people who have no hope of seeing live action—but they have tailored the audiovisual experience to the point where it’s really fun just to come in, be part of the environment and partake in that excitement.”

That’s design thinking in a nutshell: Customer standing behind a concrete barrier? Surround her with AV so that the barrier melts away.

I’ve said it before, and I’ll say it again: It’s an exciting time to be in the audiovisual and integrated experience industry. Customers have awakened to the possibilities that AV professionals, for years, knew were there. Builders of mainframe computers? They get it, too.