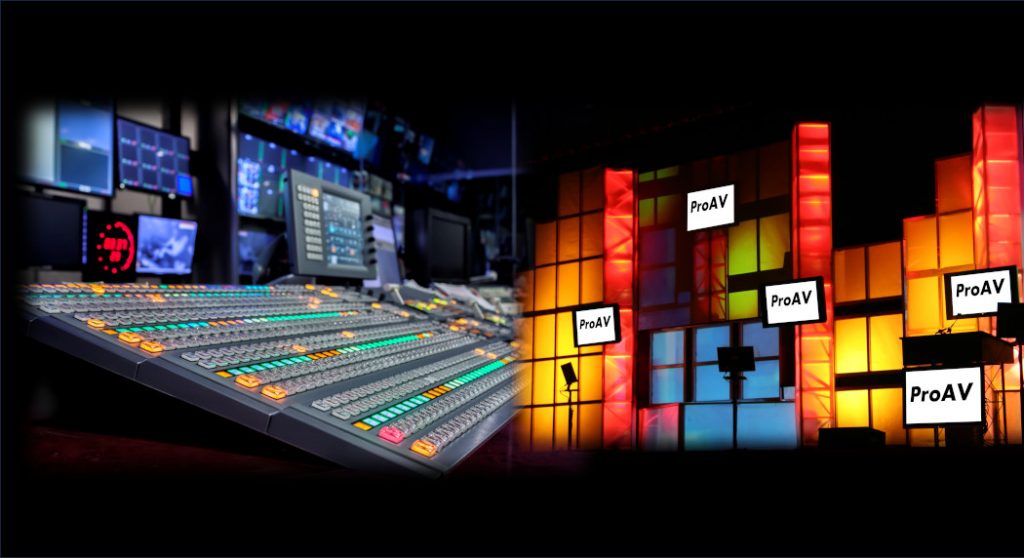 Introduction: The move from switched to packet networks is well underway, with more than a half-dozen standards competing to be the network equivalent of HDMI. Which standards are going to be with us for the long haul? Which ones will fade into history? Although nobody has a crystal ball, one path does deserve attention in the commercial AV world: SMPTE ST 2110.

Those of us in commercial AV know that the AV-over-IP train has arrived. The days of running signals down cables that don’t plug into network switches will soon seem old fashioned, just as VGA does today. We understand the potential benefit of leveraging an IT infrastructure, and we want well-sorted-out solutions for delivering high-quality, low-latency AV-over-IP networks.

We’re ready to replace tried-and-true technologies, like HDMI, and there’s no shortage of AV-over-IP standards to compete for the job. In this arena, anyone who delivers sub-frame latency with visually lossless compression (or no compression) on regular, off-the-shelf networking gear is welcome to apply. We’ve started to see some promising ecosystems appear, and even more of them are on the horizon. That invites two questions: How many standards do we need? Which standard is right for the commercial AV industry?

Enter SMPTE ST 2110, from the Society of Motion Picture and Television Engineers (SMPTE). SMPTE is a primary source of standards for manufacturers and engineers in the broadcast industry. It has created the ST 2110 set of standards to define how essence streams (video, audio, ancillary data) are transported in real time and in sync over IP networks. These standards are robust, scalable, extendable and composable. They are also an ideal foundation for continued work toward a fully featured transport and control solution for the commercial AV universe.

Perhaps the most important feature of ST 2110 is that anyone who has a SMPTE membership and a few hundred bucks can download the complete set of standards and then build anything he or she would like with them. That’s what a truly open standard means. Every manufacturer that makes products conforming to the standard is on the same footing. Everyone in the community is striving to ensure that all equipment interoperates and that test suites and testing equipment are available from multiple vendors to prove it works.

Why Does This Standard Matter?

As we leave switched networks to enter the new world of packet networks, we can choose to bring (virtual) converter boxes with us as we try out two or three different standards that do exactly the same thing. Alternately, we can leave behind that complexity and adopt one open standard to solve the problem. If history is a guide, and if software designers and AV integrators are interested in reducing complexity, we’ll end up with one standard. That eventuality has many advantages:

Interoperability: One of the biggest advantages of leveraging IP networks is the increased opportunities for integrating with the IT world, the internet and cloud computing platforms. In the same way, adopting a single standard for video transport will enable interoperability between commercial AV and broadcast use cases that intersect with each other. For example, SMPTE ST 2110 provides specifications for precise timing and synchronization using the Precision Time Protocol (PTP), which is a feature required for both live broadcast production and digital signage videowalls. Sports stadiums have broadcast production facilities, conference centers and digital signage. In a world of ST 2110, those systems can blend in ways that are new and creative. No converting signals. No needless complexity. Just video on network gear, as routable as anything else.

Scalability: With a simplified infrastructure, integrators don’t have to deploy individual cables for each signal connection. One network link can support numerous uncompressed video streams—along with hundreds of uncompressed audio signals—no matter the frame rate or resolution. With ST 2110, you’ll know that it’s going to work with a wide range of gear and without compatibility issues.

Flexibility: SMPTE ST 2110 is efficient and flexible. That means AV integrators can design the right balance of redundancy, capacity and cost into systems that can be reconfigured and extended over time, as needed. SMPTE is expected to release ST 2110-22 early this year, which will define a compression technology for the standard. With SMPTE profiles and standards for the commercial AV market, it will be possible to support ultra HD over standard 1Gb networks, something that would further widen possible applications.

So, are we there yet? Well…almost. ST 2110 is largely complete for what broadcasters require, but a couple of aspects are still being finalized. The decision has been made to extend ST 2110 into the commercial AV market, and work is ongoing. Parts of the standard are unforgiving to implement, due to the broadcast industry’s emphasis on the highest quality, the lowest latency and the strongest resiliency to failure possible. Those features are important in the commercial AV market, but the standard will have to support more use cases, such as a method or profile to deal with the alignment of unsynchronized sources in a video system. Also, source discovery and device registration are largely available through Network Media Open Specification (NMOS) software, based on the Advanced Media Workflow Association (AMWA) open standards, but work continues there, as well, and commercial AV use cases are in their sights. NMOS also allows for interactive connection management and seamless switching.

That said, the fact remains that ST 2110 products exist in the market today, and, even as improvements continue to come, there is enough in place right now to build and integrate solutions with the standard.

Today, ST 2110 and AMWA’s work on NMOS have laid the foundation upon which we can continue to build what our industry needs to solve commercial AV market problems with flexibility, scalability and low cost.

As the IT industry matured, it migrated from proprietary systems that ran proprietary software, using proprietary formats and standards, to distributed systems that run over the internet on open protocols. Because we’ve required dedicated, real-time gear to do our job, we’ve lagged behind that curve. Now that technology is to the point that we can use IP networks for real-time, low-latency video transport, the same pattern is likely to emerge in the commercial AV market.

It is unlikely that we will be the one industry that builds itself on multiple standards that are competing and proprietary, especially for a basic building block like transport. SMPTE is developing the right set of standards for broadcast, and it should be the standard we build upon for commercial AV.