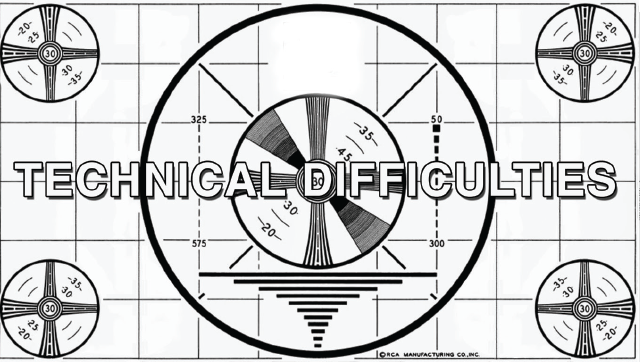 Roman author Juvenal once famously asked, “Quis custodiet ipsos custodes?”, roughly, “Who will guard the guards themselves?” The phrase came to mind when I sat down to watch a DVR recording of Guns at Batasi, one of those obscure movies on a 1:00am

Sunday night satellite feed that probably three people in total will watch.
In reality, no one watched it. We may have heard audio all the way through, but the video froze on a still shot at the beginning and continued for the entire two-hour presentation.

Clearly, no one was monitoring the video for technical malfunctions. Only the advertisements’ audio and video worked properly.

For an industry that often seems obsessed with video quality, this failure was far beyond the normal tiling, pixelization and compression hiccups that occur. This single image was broadcast for nearly two hours without a single attempt to correct the situation: It didn’t really matter if the image was 4K, 2K or even standard definition.

It was clear that no one in the distribution channel was paying the slightest bit of attention, an all-too-common trend made by our race to automate everything.

You can see this disturbing trend in designs and design reviews all the time. On a recent project, I was sent the drawings from the wrong project for review. The company must have spent at least $1000 distributing the plots alone—and only one person involved even noticed.

Many of us cut our chops in the live audio world. When it’s too loud or soft, or there is squealing feedback, we are trained to jump to fix it immediately. The digital video world is a bit different.

Digital video travels with an inherent set of errors, and some of them make us look foolish. It’s commonplace to see errors in digital signage content. Nonfunctional RSS streams, bad links and expired content are commonplace and rarely corrected for weeks on end.

Sometimes the information on display is entirely wrong. Closed captioning could use a spellcheck.

How can one claim excellence in such circumstances? It’s one thing to claim technical excellence and get all the ones and zeros in the right place at the right time. It’s entirely another to allow processes that result in complete and utter failure and not even attempt to correct the situation.

Now that our industry is cranking out content by the bucketload in broadcast, digital signage and teleconferencing, we have to ask ourselves a  fundamental question: “Is anyone paying attention to the details?”

Do we not owe it to our customers and viewers to come up with a more intelligent solution than we have today? Almost every content scheduling package comes with a modicum of remote analytics and diagnostics, but who is reviewing the data to make sure it actually works in practice?

The instant we noticed
a failure,
we would manually
override the system.
In the meantime,
we alerted viewers
of the fix with our
‘technical difficulties’ screen.

The short answer is that, generally, no one oversees accuracy, and we rely on the customer to complain. That’s the worst possible outcome. And what happens when customers do complain? I doubt the response is anywhere close to real time.

I remember working at the NBC television network years ago. There were always at least three people continuously watching just the West Coast on-air feeds to make sure the system was working, even at three in the morning. The instant we noticed a failure, we would manually override the system. In the meantime, we alerted viewers of the fix with our “technical difficulties” screen.

Perhaps it’s time to get back to basics and better understand how we monitor our remote presentations. One given is that we can no longer afford to pay someone to sit in front of a screen 24/7 to verify correct functionality. But what can be done at a reasonable cost to improve the effectiveness of our systems? Can we institute automatic reporting alarms similar to what has been done in our CCTV systems?

A good example might lie in the fate of the Boeing 299 aircraft. Boeing’s prototype crashed on its first flight, leaving three men badly injured. After an investigation, it was found that the captain had left the elevator lock on, negating pitch control. Boeing nearly lost the contract (and may have gone out of business) until they came up with the concept of a preflight checklist that identified potential sources for error. It has been a standard operating procedure in the aviation business ever since. Sorting out that prototype was good business for Boeing: The 299 went into production as the Flying Fortress B-17 bomber and 307 Stratoliner commercial airliner.

It’s simply good business to sort out this specific issue, too.