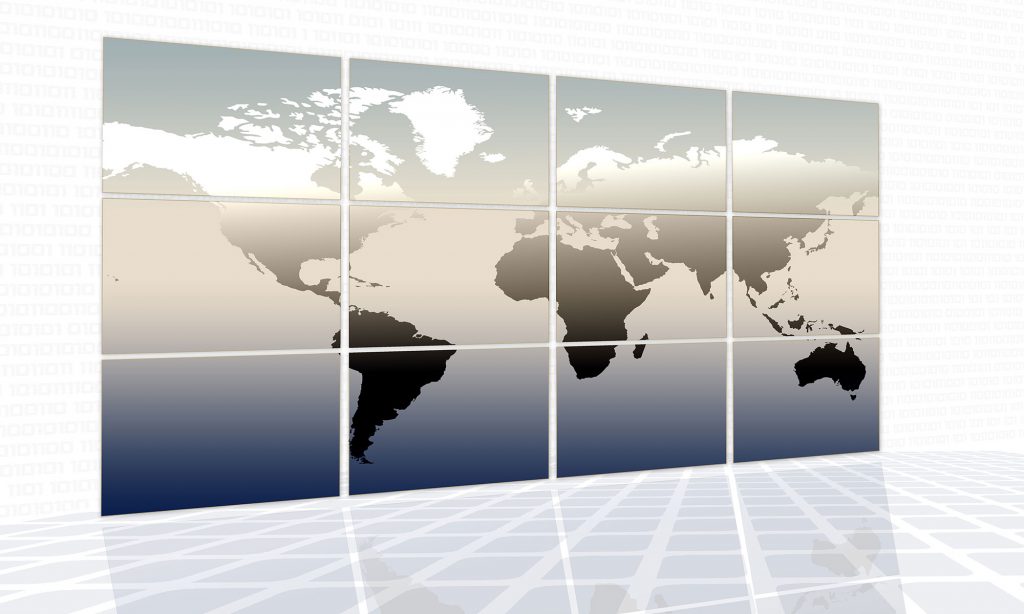 A good video processor for your videowall is worth its weight in gold. Well, almost. The truth is, the more expensive ones max out at around 10% of their weight in gold. Still, it’s awfully important that you pick the correct model for your intended application because they can get expensive quickly.

Frankly, there isn’t much out there to help you compare which model is right for you, either. Changing processor models at a later date isn’t really an option either, so this is a decision you have to get right up front. You’ll generally be stuck with what you buy for many years. So, get yourself a good consultant.

Let’s go to the more salient point now. You may not need an expensive processor at all if your presentation can be created in post production and rarely changes. For example, repeating theme park preshow content can be generated in post to look like there’s an expensive videowall processor backstage without the significant expense.

There is also a major cost distinction between video processors intended for industry/government monitoring and those intended for real-time artistic video effects. If you’re looking for a separate output for each monitor with artistic effect, your video processing bill may actually exceed the cost of your monitors. The requirements of an industrial plant video processor are quite different from those of a cable news outlet.

How different? Assuming you want a dedicated processor output for each monitor in a 6×6 videowall, you should budget somewhere around $175k. This would be appropriate for monitoring a power plant or emergency management center. For that, you generally get hard cuts between switches and a handful of video presets spread out between multiple monitors. As an example, one preset might split your 6×6 walls into four 3×3 images.

If you want artistic effects, add another $500k to that total. Better switching between sources, HDCP compliance and video image scalability travel with that price tag. If money is not an object, this is the way to go, although I confess to not having heard that phrase much lately.

There is some good news: Every videowall processor manufacturer I’ve encountered freely offers to lend you a model if they consider you a serious customer. Most of them will even install it in your demo system for a few days as long as you agree to let them watch your dog-and-pony presentation to your client. Because this is often their premier product, their sales staffs generally seem to be attentive, knowledgeable, courteous and on the ball.

Defining the quantity of inputs and outputs is key to controlling your costs, along with determining the specific functional requirement necessary for the system.

How quickly can your videowall make you look like an idiot?

NBC Burbank’s legendary 1985 diesel-powered UPS explosion is a good example of poor system design and implementation, taking the entire West Coast network off air for hours. Likewise, the failure of your videowall in a mission-critical application could also be a quick career killer, if not worse.

Video processors define the term “single point failure.” A responsible design team must rigidly define what happens to your videowall in the event of processor failure.

“All Blacks” may be a wonderful rugby team in New Zealand, but it is not an option for your videowall system. The last thing you want to do is a Haka-inspired dance explaining your failed videowall. Smaller images may not be quite so pretty, but at least the system still operates. Let your customer know what will happen in writing if they don’t go for the proper processor and make sure that customer signs off on it. A physical patch panel bypass may not be a bad backup plan.

If you have any questions about the importance of CYA documentation, feel free to ask the Bosch engineers who wrote the diesel pollution bypass code for Volkswagen. Pretty sure Bosch is glad they kept that memo!

How many equipment racks should I plan for?

Your equipment rack(s) will likely contain source machines, video processors and distribution. It may also contain audio processing and amplification. Although all that stuff may fit in a single rack, more than likely it will not, especially with all the necessary wiring while maintaining a modicum of accessibility.

Because most high-profile programs require you specify your facility input long before you know the specifics of your project, your design staff should strongly consider at least two equipment racks at a minimum, just for the wall.

Question: Is a videowall an easy sell?

No. As a consultant, designer or integrator, you generally put a spreadsheet together, slap on a cover letter and include a capabilities document, and email the package to your client. That approach generally works fine for new ceiling speakers or digital signage.

Videowalls are a more emotional sell, and there is a surprise element when they first open up your proposal, no matter how much you’ve prepped them. At its core, their new wall inevitably will define much of your client’s future experiences and perceptions for years to come for both its employees and its customers. That wall becomes the center focus for key communication.

Your task is to understand this and convince your client that you are providing the best possible solution after detailed consideration and communication with their key team players. You have synthesized their input and provided what you think is the best value for their money. Once you have convinced yourself of the new wall’s value, it is far easier to convince your customer.