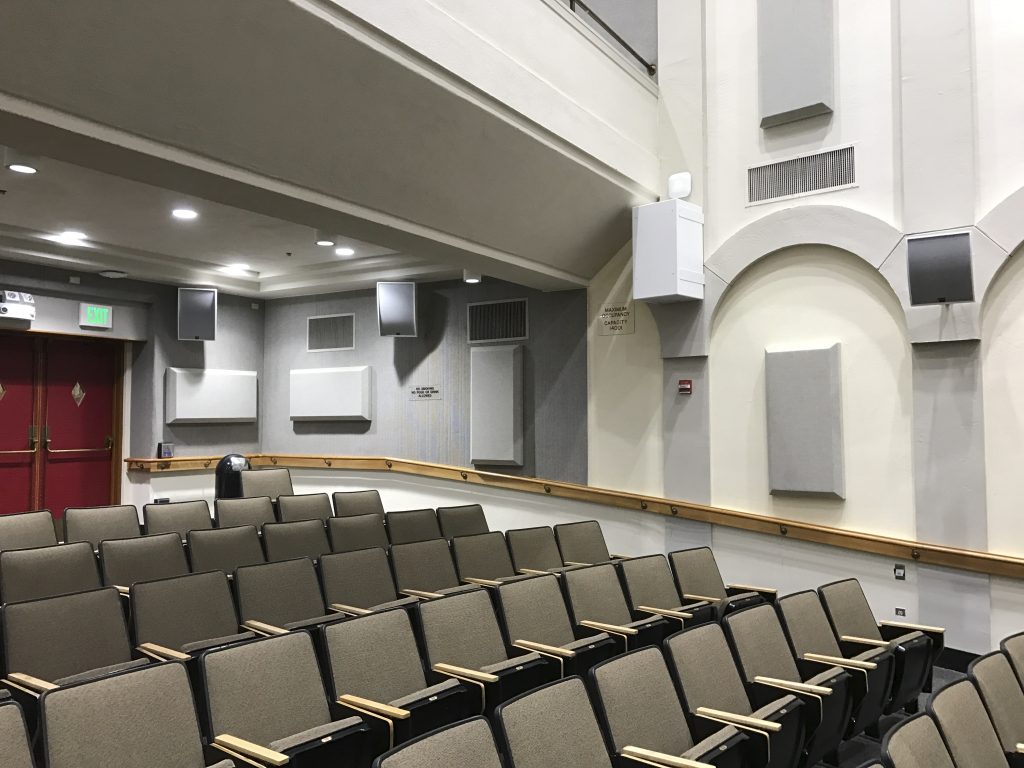 Stanford University’s Cubberley Auditorium, located in the graduate school of education, is a 390-seat space used for a number of purposes, including teaching, film, dance and performance. Accordingly, there was a need to significantly upgrade the existing sound-reinforcement system and install complete multichannel cinema audio and projection systems.

We’ll be covering a lot of facets to the project, but first some background about Stanford, which is one of the world’s leading research universities. It’s known for its entrepreneurial character, drawn from the legacy of its founders, Jane and Leland Stanford, and its relationship to Silicon Valley.

Areas of excellence range from the humanities to social sciences to engineering and the sciences. Stanford is located in California’s Bay Area, one of the most intellectually dynamic and culturally diverse areas of the US. Ray Dolby, whose namesake cinema technology is our subject, received a Bachelor of Science degree in electrical engineering in 1957 from Stanford.

Birth Of A University

Let’s go back to 1876, when California Governor Leland Stanford purchased 650 acres of Rancho Francisquito for a country home and began the development of his famous Palo Alto Stock Farm. He later bought adjoining properties totaling more than 8000 acres. The little town of Palo Alto (tall stick) emerged near the land. Named after a giant California redwood, the tree itself is still there and would later become the university’s symbol and centerpiece of its official seal.

Leland Stanford, who grew up and studied law in New York, moved west after the Gold Rush and made his fortune in the railroads. He and his wife, Jane, had one son, Leland Jr., who died of typhoid fever in 1884. This traumatic event spurred the Stanfords to make the dedication: “The children of California shall be our children.” They quickly set about finding a lasting way to memorialize their beloved son.

Ultimately, they decided to establish two institutions in Leland Junior’s name: their namesake University and a museum. Furthermore, the university would be co-educational and nondenominational. Thus, on October 1, 1891, Stanford University opened its doors after six years of planning and building. The Stanfords engaged Frederick Law Olmsted, the famed landscape architect who created New York City’s Central Park, to design the physical plan for the university. The collaboration was contentious, but finally resulted in an organization of quadrangles on an east-west axis. Today, as Stanford University continues to expand, the university’s architects attempt to respect those original plans.

The facility’s stellar AV attractions include a Dolby Labs 48-channel Atmos digital surround sound cinema audio system, SLS surround sound speakers and a Christie CP4220 4K DLP digital cinema projector. Tailored Technology, San Jose CA, was the integration company. Our interviewee will be President Eric Hudgens. Ryan Hudgens and Stuart Nuttman, classroom technology specialists at Stanford, offer their perspective on the project. The Stanford tech support staff was responsible for the installation, under supervision of Eric Hudgens. (Ryan is Eric’s son, which makes AV a generational family interest and business. More on that in a sidebar. To avoid name confusion, we will differentiate between father and son by first name or complete name.)

“You can’t be more exacting than Dolby Labs!” exclaimed Eric Hudgens. “From the onset of the Stanford Cubberley project, Dolby Labs held us to the most demanding specifications that any audio project could attempt to meet. We took a lovely old 1935 auditorium and converted it into a multipurpose, 38,000 watt digital thrill ride.