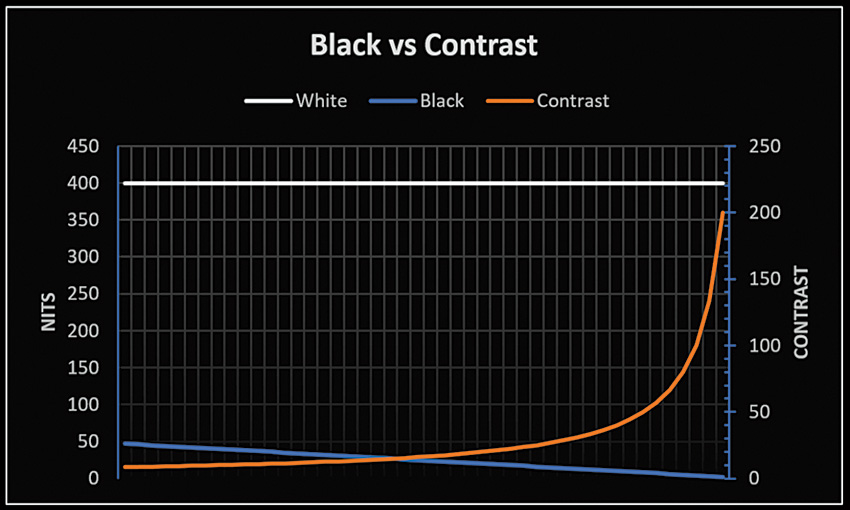 When it comes to display technologies, projection systems have been around for a very long time. There have been many improvements in the technology, but nearly all of them apply to the projector. Changes have progressed projector imaging systems, from three-gun CRT to LCD and DLP engines, along with light engine improvements, from electron guns to Xenon bulbs. So, as a system, projection grew; however, the screens stayed similar—some form of coated vinyl, particulate bead or a mix of both. Around 2004, screen technologies that factored in ambient light rejection started to emerge in the market, and that enabled projection to begin to really progress. That’s because optical projection screens could remove ambient light without removing the projection light. So, projection systems can be used in areas in which, previously, only light-emitting technologies were capable of being used.

To understand how, when using optical projection screens, this is possible, a return to the basics of imaging is required. The basic part of any image is contrast—contrast is king! Any color in its full, saturated form is black (minimum light point), and any color fully bright reaches white (maximum light point). So, whether it’s a black-and-white or color-rich image, contrast remains one of the primary factors. The Image Contrast Ratio (ICR) is, simply put, just the total image white level divided by the total image black level (ICR = w/b). The important thing to note is that black is the primary focus and denominator; therefore, it is the black value that changes an image the most. Adding to the white level has an effect, but it’s not nearly as effective as reducing the black level. Refer to Figure A and Figure B.

A change in Figure B can also be seen, but let’s explore this idea further to see how it breaks down. That chart shows the contrast level change as white is increased from 50 to 1,000 nits, in increments of five nits. So, 1,000/50 = 20 times higher at the highest point than at the lowest. The black level stays constant at 50. Through this, the contrast increases from a level of one up to 20. So, the contrast change by adding white is 20/1 = 20. That’s the same as the light increase. This shows that, when the black level remains the same, the increase in white and contrast is proportional. So, in effect, if a system uses double the power, then you get double the contrast. This is similar to what is done with traditional screens. The ambient light cannot be removed; so, all you can do is add more power.

When combined, the two figures illustrate that the key to success is a race to zero, not a race to more power. And, in an industry whose designers are running with their hair on fire to add more and more power to overcome a room’s brightness, that’s a bold and confrontational statement. But, the reality is, at the end of the day, the numbers speak for themselves. So, if you’re a designer, stop, turn around and go the opposite direction. Get as black as possible, and then work on the power level to get a proper white point. Once that is in place, you can indeed use projection in areas in which you could not use it before.

Let me provide an example. Let’s use a room with an ambient light level of 30fc, and let’s say the screen has 10fc of light on it. Using a typical projection screen, which has an ambient reflected value of 35 percent, the best black level possible would be 10x.35 = 3.5fc. To get a 20:1 contrast ratio, you would have to have a projector that would enable the white point to be 3.5×20 = 70fc. That is achievable, but very bright and uncomfortable to look at. Realistically, you would have to have a projector achieve 30fc and no more to be comfortable, and the max contrast would be 30/3.5 = 8.57:1. Viewable…but poor, at best.

Using an optical screen with an ALR value of just five percent the same room would have a black level of 10×0.05 = 0.5. So, to hit a contrast level of 20:1, the projector would only need to be able to hit a white point of 0.5×20 = 10fc. Now that would be very easily done, but the white level should be between 75 percent and 150 percent of the room ambient, with 1:1 being perfect. So, if you were to use a projector that could hit just 30fc on screen, then it would be very comfortable, while also offering an outstanding contrast ratio of 30fc/0.5fc = 60:1.

At the end of the day, it’s easy to see, based on the previous example, that an optical screen can make a huge difference in image quality. The room was barely capable of supporting projection originally; however, with an optical screen, it was capable of achieving great contrast and image quality. So, where, previously, a good designer would have only used a light-emitting technology, such as a flat panel or direct view LED, a projection system could now be used. Combine that with the fact that it really is a race to black, and optical screens are a “must have” in every designer’s tool set.