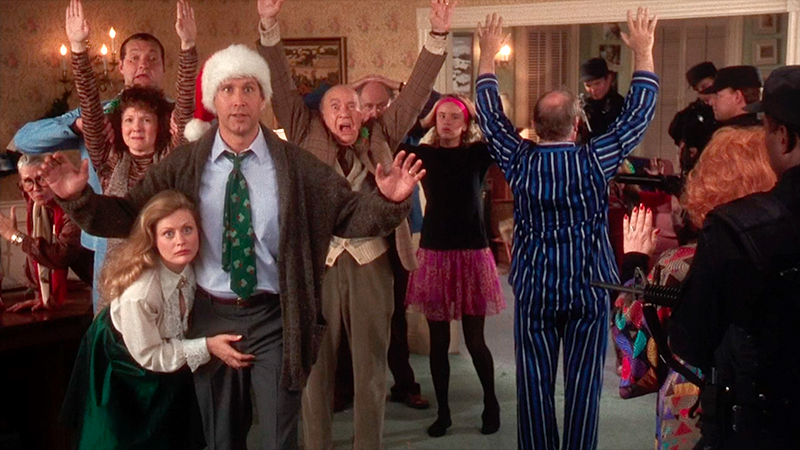 I love all the National Lampoon Vacation movies. Yes, I even love European Vacation. And, since ‘tis the season, I figured what better way to celebrate than with a scene from Christmas Vacation with everyone sitting down to eat a lovely family dinner.

My initial premise was to shoehorn lessons learned about recalling individual levels from a control system instead of simply using presets in the DSP mixer. That quickly fell apart for obvious reasons. But, as I watched it again, I realized the scene was a metaphor encompassing many people we encounter on any given project.

Clark is doing his best to give his entire family the best Christmas ever, but everywhere he turns, he runs into another challenge. Isn’t that what project managers do day in and day out? Whether it’s trying to get a squirrel out of the house or trying to get the programmer to communicate better with the audio engineer, the project manager’s job is never done. There’s always a fire to put out. Sometimes that fire involves two manufacturers that just don’t play nicely together, and sometimes its caused by having to document the power system on the fly.

Aunt Bethany (aka “The Older Salesperson”)

Have you ever run into a sales person (usually older and male) that is so burnt out that they just completely stop listening to the client? They are good people, and they try somewhat, but there is no way they are paying attention during the programming meetings. Instead of giving the client what they ask for, they give the client a system that matches the title of the room. That’s dear Aunt Bethany at her 80th Christmas. She’s asked to give grace (“THE BLESS-ING!”), and she delivers the Pledge of Allegiance. It kind of works, but it’s certainly not what was asked for.

The Cat (aka “The Nosey Operator”)

The cat isn’t doing anything wrong. It’s just being a cat. The same can be said for that operator that starts to play with the system before it’s ready for business. They’re just being an operator. You can try to bat their hand away with a rolled up newspaper, or spray water mist in their face, but they are the ones who need to make miracles happen when the installer is long gone. If the operator can see how the system was put together, where the spare cables are, and chew on some lights before the system is turned over, their lives are going to be so much easier. Just, please, for the sake of Christmas, don’t let those poor operators get electrocuted behind the rack.

“Do you smell something?”

Cousin Eddie (aka “The Green Technician”)

You’d love them so much more if you didn’t have to interact with them every single day. Their hearts are in the right place, but their head and hands are just not. We had a technician on staff that was editing some training videos for us. He ran into some networking issues, so instead of calling IT, he figured he would just use his cellular hot spot to download and upload the training videos to the server. Bless his heart, he got it done, but 143 cellular GB (and $250 in extra charges) later, we got a “DATA PLAN was full!” message from the carrier.

Snots The Dog (aka “The Know It All Executive”)

Have you ever been on at a project meeting where some executive who is only tangentially involved with the project commandeers the project meeting for 30 minutes, bringing up issues that were resolved months ago? That totally reminds me of Snots. You’re not sure why they are there, but they just start hacking up a chicken bone or humping your leg. Because they are who they are (either a Senior Vice President or an 80lb rottweiler), it’s best just to let them finish.

Ellen Griswold (aka “The Perfect Client”)

They know you. They love you. They’ve been with you forever. They are the reason we do what we do. We try to make them happy as best we can, as often as we can. They are the focus of all our AV efforts. Just like Mama: when the client is happy, everyone’s happy.