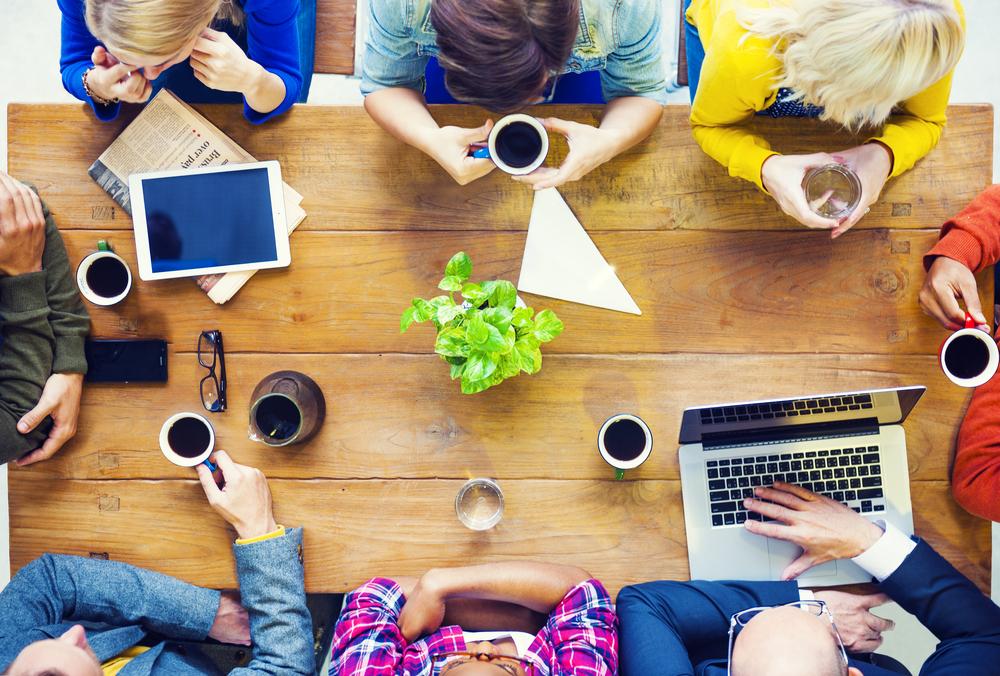 The next generation is here, OK?

Yes, that’s right—we’re here, and we’ve been here for a while now. The oldest millennial is 35 and we, as a group, are thriving in a variety of different industries, but especially in the AV industry. Traditional ways of doing things are being disrupted, and our generation is smack dab in the middle of it. That’s why now is one of the greatest times to be in the AV industry. After all, it’s exciting! Technology is changing rapidly. IT now has a strong presence in the AV space, and it’s challenging our industry to do things differently. And that’s resulted in that shift away from traditional business models.

It’s important to stress the urgency and immediacy of this transition, too. The shift isn’t coming…it’s happening right now. For that reason, the best thing to do, no matter what generation you belong to, is not to resist the changes, but also to be mindful of how our day-to-day work will be affected. Be open to new technologies, new ideas and pushing new limits.

As influential as the next generation is becoming, though, there aren’t yet many in the 18-to-35 age range who hold senior management or executive titles within AV companies. But that doesn’t mean, in our industry and in others, that we’re not educating ourselves, learning and gaining experience as we seek opportunities to effect change. Millennials and Generation Z, taken together, are on track next decade to make up about 70 percent of the global workforce. I think we’d all like to see a large percentage of them become a part of the AV industry.

“The audiovisual industry is a vibrant, creative and truly fulfilling career field,” 32-year-old Joseph Valerio, Director of Workforce Development at InfoComm International, said. “If someone seeks a job where no two days are the same and where there’s a lot of opportunity for growth, then AV is the place to be.” He continued, “This is the moment our next generation can seize the day. Companies big and small are looking to fill their ranks with passionate individuals who have a will to learn, and who aren’t afraid to ask questions. They want those programmers, robotics students, graphic designers, hands-on builders, engineers and critical thinkers who want to make positive change in the world.”

Recently, I asked some peers who have been in the industry for quite some time if they had gone to college. Although eight out of 10 had a degree, a third of those were degrees that didn’t relate to technology. These people, in their current management roles, execute the hiring process, and the characteristic all of them seem to seek is passion. “Young professionals need not have tons of experience with AV technologies or services,” Valerio stated. “A little knowledge will go a long way to get someone started on the job. And many already use AV in their daily lives—at school, in their houses of worship, streaming concerts and live events, etc. To turn those passions into a career in AV is easier than one might think.”

Every generation is more diverse than the last, so a conversation about the next generation must address that aspect. Right now, the AV industry isn’t very diverse. The late Stephen Covey, an American educator, said, “Strength lies in differences, not in similarities.” I believe the more diverse our industry becomes, the more innovative it will be. Looking at the young, up-and-coming AV professionals at InfoComm, we seem to be headed in a better direction. To maximize our growth potential, though, we must alert people to the AV industry and its numerous opportunities.

“InfoComm and our members are making a concerted effort to foster more industry awareness through outreach and events—even a Young AV Professionals Council that consists of volunteers keen on helping attract new talent,” Valerio explained. “That group is currently working on an exciting project using the web and video to map out the different roles in our industry.” These efforts complement those from InfoComm’s International Communications Industries Foundation (ICIF), which strives to properly equip the next generation of AV professionals. “Ultimately,” Valerio added, “if more career-seekers and young professionals can ‘see’ themselves in AV, they’ll be more likely to join us. And, when they do, we’ll welcome them with open arms.”

Twenty-four-year-old Jesse Scarborough, CTS-D, Chair of InfoComm’s Young AV Professionals Council (which is now the second-largest InfoComm council, behind the Women of InfoComm Council), is System Design Engineer at CoitCom, which is located in the heart of Silicon Valley. He expressed his belief that, in the future, certifications—including and especially networking certifications—will further grow in importance. “AV companies are going to have to hire people who know networking or train their people on networking,” he stressed. “If not, integrators are going to continue to butt heads with IT departments. With everything moving onto the network, this will have to change in the future.”

If we, as members of this industry, don’t learn to speak the language of IT, we put ourselves in peril. In the near future, IT and AV will not be—in some cases, are not now—separate departments. We’ll have to work as one team to deliver exceptional experiences. The young professionals who’ll populate our industry for decades to come must be equally conversant in AV and IT. That’s what tomorrow’s workforce, and tomorrow’s projects, will require.

Our industry has been hardware-driven for years. As the new generation continues to climb the ladder, we will create full-service packages to build interactive, immersive experiences. The old “set-it-and-forget-it” model built on simply installing gear doesn’t work anymore. If an integrator is installing a digital signage system, the new model is also to present content-creation options to the client. Commercial AV has to step outside the hardware box and begin to explore.

Twenty-eight-year-old Hailey Klein, Director of Marketing and Communications at PSNI, made that point eloquently. “Everything we do is customer experience,” she stressed. “Integrators are missing out on an opportunity if they go in, sell hardware and leave it at that. There are all kinds of ways to provide value for your client post-installation.” Now, more than ever, the industry is embracing exactly that mindset. After all, this year, InfoComm introduced a thought-leadership conference called TIDE (Technology. Innovation. Design. Experience.), and I believe it’s an unambiguous sign of what’s to come.

Actually, though, the fact that the industry is only now really beginning to talk about content creation, and the opportunity to use audiovisual technologies to create experiences, rather than just build systems, is kind of mind-blowing. We, as an industry, provide everything needed to create almost any type of experience that an end user could possibly imagine. We’ve only just begun to scratch the surface of what we can deliver for our clients.

And it’s not only about delivering experiences for clients, although that’s first and foremost. Klein commented, “Furthering the relationship with clients beyond the install also drives [awareness of your brand]. If you build a continuous rapport, you’ll have advocates for your brand, because the client will trust your work and you.” There’s no better way to boost your business in an uncertain, but ultra-competitive, future landscape.

The design and consulting spaces are particularly appealing to the creative, critical thinkers whom Valerio mentioned our industry is seeking. That’s because systems designers and consultants are at the forefront of driving creative ideas that, when implemented, transform end users’ dreams into lived realities. And as our industry moves in the direction of the “as-a-service” model, designers and consultants will remain essential, even as the designs they create—and how they create them—start to look different. Even now, innovative, future-minded approaches have already begun among next-generation AV practitioners.

Chase McCloud, CTS-D, is 31 years old and Systems Designer for Interstate Electronic Systems. A systems designer for three years, he got his start in rental and staging. He currently designs systems for higher education and government emergency operation centers. He discussed the Internet of Things (IoT) now being implemented in those spaces and the effects that has had. He said, “IoT has an effect on the design process, with many things to consider. Network security and data traffic are major concerns for those types of facilities, which means we have to take the time to do our due diligence and consider the impact of our system on the network and how it’s intended to operate.”

He continued, “I like, when time permits, to spend time building 3D mockups of a space to get a ‘simulated real world.’ I use it for a multitude of things, such as sight lines, screen sizing, custom mounting options, audio placement, etc. Many times, those models have turned into full renders for use by our sales staff. They truly serve as a tool for me to ensure that fine details are considered before releasing a design.” He added that AutoCAD and SketchUp make it possible to generate the models, which prove useful throughout the design process.

Twenty-four-year-old Scott Kelley, a Designer for TEECOM who has a degree in electrical engineering, weighed in, as well. TEECOM works directly with architects, and the firm doesn’t buy or install any hardware. Kelley and his fellow design consultants also create and use 3D mockups, as TEECOM team has added VR to its design process. “In the future, design will be even more hands on,” Kelley stated. “At TEECOM, we use VR to design. We’re seeing Revit software a lot now, which is really useful for creating cohesive and comprehensive 3D building models. Revit lives in the 3D space, so it’s very helpful for clash detection.” He continued, “We render and export the 3D models from Revit, and then we open those models on a smartphone to use with our Samsung headsets.”

VR is one of those technologies that, although very exciting, hasn’t fully been grasped by our industry just yet. So, it’s exciting to hear that a company is harnessing the technology to ‘wow’ its clients and provide tremendous value. Kelley believes VR and augmented reality will come to be fully integrated into the AV design sphere. “This would be extremely valuable, and it would break down the norms of how we design,” he added.

These shifts, and many others, are already happening. The next generation—of people, of technologies and of business strategies—is here. The future is now.