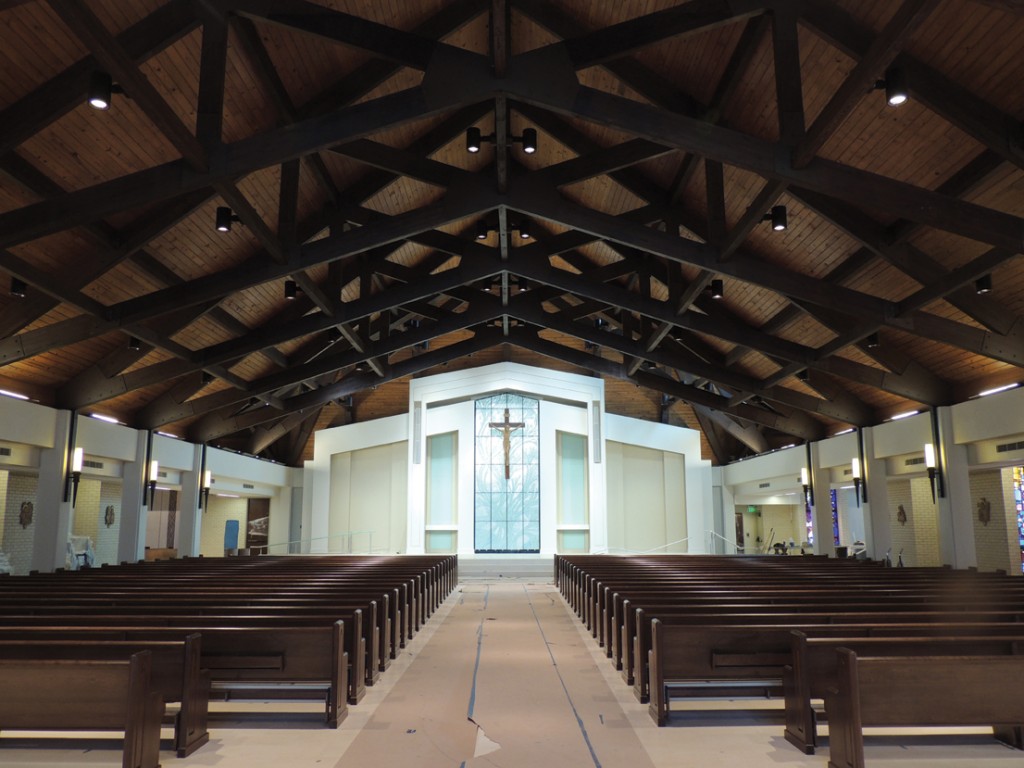 St. Jude is known as the Patron Saint of lost or desperate causes. For many years, good sound and clear spoken word seemed to be a lost cause in traditional Catholic churches, known for high ceilings and plentiful hard surfaces that make the room sound wonderful when the choir performs, but tend to create echoes during the sermon.

Thanks to today’s acoustical treatments, audio processing and the quality and directionality of speakers available, this is no longer the case. But it still takes the right audiovisual integration team to make a Catholic church sound its best during musical portions of the service, as well as during spoken word.

Few integrators know this better than Chris Jordan, owner of Electro Acoustics (EAVI) (www.eavi.com) in Fort Worth TX. Jordan has been installing sound systems in churches for 30 years this month, and specified and installed his first system in a Catholic church for the Fort Worth Catholic Diocese in his first year in business. (See “Changing Trends in Catholic Church AV System Design” on page 24 to read Jordan’s views about the history of sound and video in the Catholic Church.)

Most recently, Jordan and his team, which includes Project Lead Preston Meyers and Steve Burge, specified, designed and installed a new line array system in St. Jude Catholic Church (www.stjudecc.org) of Mansfield TX. The system meets the stringent requirements for visual transparency while delivering crystal clear spoken word and meeting the audio needs of choirs ranging from traditional English- and Spanish-speaking groups to a mariachi band and a children’s choir. These were set by architects Raymond O’Connor, AIA, and Ola Roos, LEED AP, Partners of OA&ID Ltd. (http://oaid.net/firm-profile.html). EAVI also gave the church video capabilities to project lyrics onto the front wall, with projectors hidden in the back wall.

Jordan is quick to point out that the superior sound reinforcement was a true joint effort between his audio designers and acoustical consultant Bill Johnson of Acoustic Design Associates (www.acousticdesigndallas.com) in Dallas TX.

“We take a holistic approach to any room,” Jordan said. “We’re not looking just at the sound system design, but also at the background noise level, reflections from walls and acoustics in terms of RT-60 and reverberance. EAVI takes responsibility for the whole project outcome, and we bring in a whole team to get it solved.”

To that end, before any sound design was completed, Jordan brought in Johnson to discuss the goals for the space and to evaluate and assess the client’s style of worship and expectations for the room. Johnson added two-inch acoustical treatments across the back walls, and an acoustical cloud across the ceiling to reduce reverberation. “Even though the space looks cavernous, it’s very well controlled,” Johnson said. “It only has 1.5 seconds reverberation, so it’s great for speech clarity, and there are curved surfaces to minimize echoes.”

Jordan had no difficulty pinpointing the project’s greatest challenge. “Finding a place to locate the speakers that would help us achieve our performance objectives while meeting the architect’s stringent visual objectives was by far the biggest challenge, hands-down.”
Jordan said, “The architect did not want any technology to be seen at all. He didn’t want a speaker cluster hanging from the ceiling, line arrays out in the room or video screens hanging from walls. He didn’t want to see any technology, but the audio and video had to be there.”

Below the arrays, Bag End Systems D18E-I subwoofers are enclosed in the wall. “Being able to place the subs below the speakers allowed us to maintain good acoustical time alignment,” Jordan explained. “Installing them in the wall gave them minimal visual impact, satisfying the architect’s requirements.” The subs include the company’s ELF (Extended Low Frequency) processor.

The subwoofers are powered by two channels of an Electro-Voice CPS4.5 amplifier. The other two channels in the amps power a collection of 70-volt speakers that deliver sound to the narthex (the entryway in a Catholic church), a small chapel to the right of the main sanctuary and several rooms behind the stage.

The narthex uses six-inch FM6.2 in-wall speakers from Electro-Voice mounted in the ceiling, while a dozen EVID C8.2 eight-inch coaxial ceiling speakers with horn-loaded titanium-coated tweeters are located over the choir, in the chapel and in the backstage rooms.

Volume control is provided for these spaces through Atlas Sound AT35-RM and AT100-RM rackmounted attenuators. “They’re very user friendly,” Jordan said. “We’ve done a lot of Catholic churches over the past 30 years, and we’ve learned what works and what doesn’t.”

EAVI also had to come up with a user-friendly, tamperproof solution for sound mixing because the church doesn’t employ a sound engineer for live mixing during services. Again, Jordan specified a time-tested, trusted solution he’s used in many Catholic churches: a Lectrosonics DM1612 (16-in, 12-out) digital matrix audio processor that provides auto mixing capabilities. “We’ve used the Lectrosonics mixers many times before because their algorithms for automixing are perfect,” Jordan said, adding that reliability, consistency and durability were also keys to his choice.

The church holds a mass with no choir, only spoken word, every day, plus Saturday and Sunday services with a full choir. Regardless of the day of the week, the priest just hits a green power button on the mixer in the rack located behind the choir location, puts on his microphone and is ready for the service. “There are no adjustments and no decisions to make,” Jordan said.

The choirs have their own mixing system that uses a PreSonus StudioLive 16.4.2 16-channel digital mixer with preset capabilities and wireless mixing capabilities through an iPad. EAVI supplied the church with a Linksys router, allowing each choir director to access the mixer through an iPad, mix from any location in the house, create presets during rehearsal and recall those presets for Sunday morning services, so no live mixing is required. “By keeping the choir system completely independent from the main church auto mixer, the priest can’t adjust the choir system, and the choir can’t adjust the main speech microphones,” Jordan said.

Finally, the church wanted some video capabilities to be able to project lyrics onto the back walls, but didn’t want to see the screens. “The idea of displaying the words to hymns for all to see was a new concept to this church,” Jordan explained, noting that the architect and the planning committee were open to the idea, but fearful that large video screens would distract from the church’s worshipful atmosphere. “The technology (projectors, mounts, cables, screens) all had to be cloaked,” Jordan stated.

The EAVI team developed a concept to use a space between wooden panels behind the platform to “frame” the image. “To have the words appear on the walls and then go away when not used is consistent with the room drawing your eyes up for worship and not on technology or video screens,” Jordan said, adding that the architect adjusted the paneling to perfectly frame a 16:10 image, while 7000 lumen projectors ensure the image on the painted sheetrock is “still quite vivid.” Two Panasonic PT-DW740ULK 7000 lumen WXGA DLP projectors with ETDLE450 power zoom lenses are hidden in the curved back wall nearly 100 feet away, completely hidden from view, with just a small hole in the sheetrock revealing the lens to those who know where to look.

Two Panasonic TH-47LF5U 47-inch 1080p LCD screens on carts serve as monitors for the choir, while a Kramer HDMI switcher allows connection of HDMI video sources to the choir monitor.

As society grows more reliant on technology for convenience, entertainment and productivity, even the most traditional of Catholic churches are noting the benefits of incorporating the right audiovisual technology in the right places to help make the sacred sanctuary an even more worshipful space with few distractions.

Previous ArticleGiving Back… Do you? Will you?Next ArticlePitch, Plan and Execute