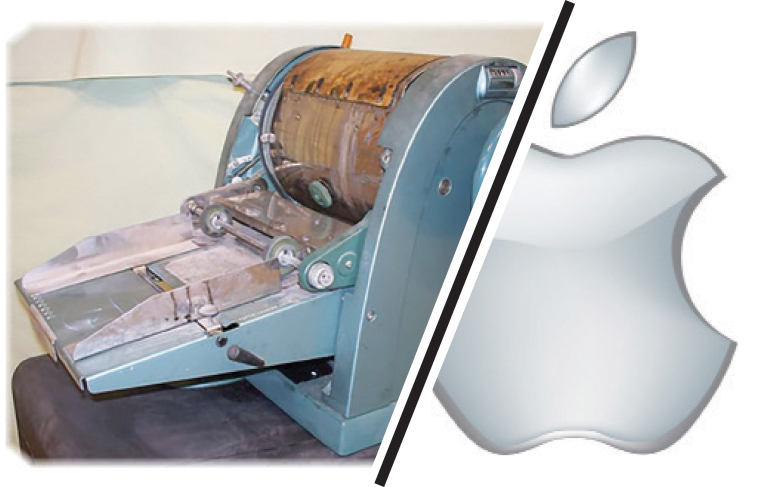 A history of the use of Macintosh in Houses of Worship.

Thirty years ago, the Apple Macintosh (Mac) was born and changed the way the world created, managed and published content. The Mac, a Messiah of sorts, redeemed us from the bondage of messy communication formats and then transformed the ways that religious leaders communicate with congregants, with people in their communities and with people around the world.

Let’s look back to the pre-Mac era to understand the way that many religious leaders created publications. My parents are missionaries. In the beginning of my father’s ministerial career (1963), he and my mother used a mimeograph machine to communicate with their donors. They used a typewriter and waxed paper to create a stencil. If they made a mistake, they would get another piece of wax paper and start again. When they finally had an error-free stencil, they used a messy, inky mimeograph machine to hand crank out copies that they mailed to each of their financial supporters.

Fast-forward to early 1983 when my father purchased an Apple IIe with two 5¼-inch floppy drives and a daisy wheel printer. He used this computer to manage his ministry finances and to create newsletters to communicate with his financial supporters. As you can imagine, the Apple IIe transformed the way he created and duplicated multiple copies of his newsletters.

Super Bowl XVIII was played on January 22, 1984. I had little interest in the teams, the Oakland Raiders and the Washington Redskins. But, like many people, I enjoy the Super Bowl spectacle. That Super Bowl was particularly interesting because it was played in Tampa FL, which was only one hour from my home. I take notice of the Super Bowl commercials. I was amazed when the Apple Macintosh commercial was broadcast. I was already an Apple user and a fan of the Apple way, but the commercial piqued my interest in the Macintosh.

I went to the early version of the Apple Store and looked at a Mac that was loaded with MacWrite and MacPaint. This close encounter opened my mind to a world of new possibilities for creating and publishing content. Less than a year after we purchased the Apple IIe, the Mac was on the market and I bought one (note the eventual trend). I wasn’t alone. The Mac became a hit with the public. Desktop publishing was a new, exciting reality. The Mac was also a hit with content creators in Houses of Worship (HOWs). Mac Publisher, PageMaker and the Laser Writer printer enabled these people to create interesting letters, Sunday bulletins and other types of communication that were distributed to congregants.

IBM and Microsoft products (particularly Windows) put a lot of pressure on the Mac. In addition, internal pressures between Steve Jobs and his board of directors almost led to the demise of Apple. Although IBM-compatible computers permeated nearly every office space on modern earth, most every organization, including HOWs had a Mac or a room with Macs that addressed the “creative” publishing aspects of the organization.

In the late 1980s, my father’s organization had grown from his one-room office with the Apple IIe into a large Christian media production facility located in Europe. His organization had an IBM PC network in the office areas to crunch numbers and generate communication materials. They also had Ataris and Macs to spice up the bland publishing.
The core of his organization was a multimillion dollar audio and video production facility. They had a custom-built audio room that housed a beautiful Solid State Logic (SSL) G+ series console. Working with the SSL continues to be a wonderful experience. Working with two-inch tape was fine until we attended a demo of one of the first Pro Tools/Mac systems. The production team fell passionately in love with the new “non-linear” way of working. Later on, the video editors fell into a trance when editing with Avid/Mac systems after years of working with our industry standard CMX editors and U-matic, one-inch and Betacam machines.

The Mac has enabled HOWs and religious organizations to produce original, high-quality content at a much lower cost and in less ornate facilities than was the case in earlier years. I have built small, medium and large production facilities on five continents in more than 40 countries that are centered around software hosted on a Mac. Furthermore, I have many colleagues who have also installed Mac systems in religious organizations around the world. For anything media, Mac is a stable product that just works (let’s hope that “Mavericks” does not mess this up). I believe this trend will continue for many years to come.

The Mac has a healthy history in the house of worship market. Today, there are many products available that enable people to create content. However, I believe that the Mac (and the iPad and iPhone) is currently the prominent choice for media creators to publish, share and display content in HOWs and religious organizations around the world. That is what I believe. Please tell me what you believe.