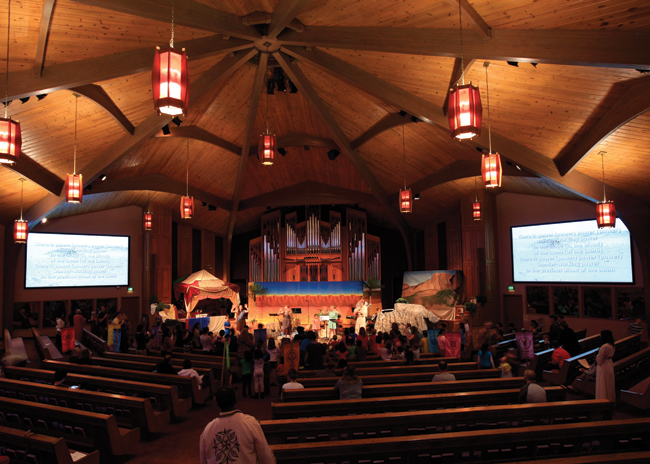 Audiovisual integrators who work in the house of worship market are used to selling the “idea” of AV technology to the decision makers in a church before a project can begin. At Sunnyside Seventh Day Adventist Church (www.sunnysideadventist.org) in Portland OR, a tech-savvy team, headed by Pastor Jonathan Russell, already knew that the decades-old audiovisual systems in the sanctuary needed an upgrade, but congregation members were skeptical about how the changes might affect worship.

“We are a conservative congregation,” said Russell, who managed the installation project from the inside and worked closely with the Eugene OR-based design and integration firm AGI Professional (www.agiprofessional.com) to outfit the church with new sound and video systems. “We were anxious about using video to illustrate our messages with graphics, video or PowerPoint. There was actually a grand debate over whether we should continue to use our hymn books or put lyrics on the screens.”

The skepticism was warranted: The old video system hadn’t been used since Russell started several years ago—and for good reason. “We had a giant, mechanical dropdown screen, which lowered right in front of the pipe organ,” he said. “If we wanted to use video, we had to stop, lower the screen and wait for it to grind down. By the time that process was complete, we forgot why we wanted to use video in the first place.” He continued, “The projector was underpowered by a factor of four, at least, so it was not very bright. The video system was a distraction, not an enhancement.”

The 30-year-old audio system was equally ineffective, composed of hundreds of speakers mounted to the back of each pew, sending sound in every direction at the same time. At the time it was installed, the system had been adequate for voice reproduction but, today, it didn’t work for either music or spoken word. Russell likened the audio quality to “the sound of a transistor radio,” saying, “We needed a sound system that would make the pastors sound human, and play some forms of contemporary music, such as vocal and classical guitar.”

Although many congregation members recognized the need for new audio technology, the detractors had a strong voice, as well. “We had people who were dead set against hanging huge speakers or any other technology that would distract from the aesthetics of the church.”

Ultimately, seeing and hearing was believing, and the congregation fully accepted the high quality yet unobtrusive Renkus-Heinz steerable array system and Da-Lite 192″x108″ side screens. In addition to helping outfit the new sanctuary with sound and video, AGI Professional designed systems for a fellowship hall with connectivity across campus so the hall could be used for overflow space during more crowded services.

To save money, the church relied on a team of educated volunteers to perform the physical labor of installing the systems, calling on AGI Professional to help with wiring, terminate the connections and, finally, commission the systems. “To reduce labor costs, [some] churches look to do whatever they can do themselves in an installation,” said Kyle Anderson, President of AGI Professional. AGI has helped complete these types of projects in the past, but always chooses those customers carefully to ensure that everyone will be happy with the end result. “Obviously, those capabilities vary from church to church.”

Anderson references the adage, “There’s nothing more expensive than volunteer labor,” and pointed out that this was decidedly not the case at Sunnyside. “They did it right,” he offered. “They asked us a tremendous amount of questions—the right questions—and allowed us to work alongside them for their success.” Anderson completed the audio system design in both spaces, while Steve Diamond was the acoustic designer and Enoch Howell was the video designer. Ray Priszner, lead installer, was the onsite contact who helped see the project through to completion.
Russell said he had no doubts about his team’s capabilities to install the infrastructure and hang the speakers, screens, cameras and projectors. “We have so many people with construction experience on our team, we were confident we could complete the project,” he stated. “Our Facilities Chairman has been a general contractor for nearly 40 years.” Many of the volunteers were involved in the church’s original construction 32 years ago, which speaks to the extensive experience of the team and the volunteers’ in-depth knowledge of the church.

One drawback to using volunteers, Russell said, was the length of time it took to complete the project, including three months pouring concrete, running wire and building a new sound booth. The church also had to cut through the concrete floor to install stage pockets, a task that professional integrators know, although not technically challenging, can use a lot of man hours. The church continued with its usual services during the duration of the project. “You just put up the warning cones and press on.”

From a technical standpoint, the biggest design challenge was the age-old dilemma of balancing speaker placement with aesthetics. “We had to meet [the church’s] high-end musical expectations, which included traditional music that is orchestra- and choir-driven, where fidelity is a must, while meeting their aesthetic criteria,” Anderson stated.

To accomplish this, AGI specified Renkus-Heinz ICL-FR-Dual digital steerable arrays placed to the left and right of the stage. Anderson said that the directionality of the speakers made it possible to get the sound required without adding acoustical treatment. The elements, two in each array, are enclosed in matte black cabinets, which were stripped and then repainted in a wood grain finish by church members Ray and Edmond Betz. The new color matches the wood design on the walls, making the speakers virtually disappear “into the woodwork,” so to speak. The speakers are powered by a dual-channel QSC PLX1802 amp.

A Renkus-Heinz DR18-2R self-powered subwoofer is placed in a sub-vault inside the wall just below each array. The high-mass sub-vaults keep the sound from resonating through the stage area. Two Fulcrum CX 896 fill speakers are aimed directly at the choir as choir monitors. DSP is handled by a BSS BLU 100 processor.

The church made the transition to a digital mixer with an M-480 V-mix 48-channel digital console and three Roland S-1608 16×8 stage units. “The console did everything they needed it to do at the right price point,” Anderson commented.

In the sanctuary, an Extron 4×8 DVI video matrix and a six-input seamless switcher, controlled through an Extron touchpanel at the front-of-house, allows the church to send a variety of sources, including feeds from a PC running PowerPoint and a DVD player, to Sanyo PLC-HPL7000L projectors shining on two Da-Lite 192″x108″ fixed-frame side screens. Although the screens are positioned to the far left and far right, their size gives all congregation members adequate visibility without the screens obscuring the pipe organ in the center rear of the platform. The tech team uses the screens for scrolling announcements prior to services, song lyrics and sermon notes, as well as custom-produced DVDs promoting specific church activities. For instance, Russell said, “We’ve been running a fundraising video for our Pathfinders’ group before services, with great success.”

In addition to the AV upgrade in the main sanctuary, the church also upgraded systems in the fellowship hall, an odd-shaped room with three distinct sections, which Russell described as “three squares that combine to form an L shape.” Prior to the upgrade, the main screen in the fellowship hall could only be seen by two-thirds of the room.

The church hung 80-inch Sharp LED-backlit LCD screens on each wall of the side rooms (the lower half of the L), using the Extron matrix to switch sources. The fellowship hall can be used as an overflow space, receiving a feed from the sanctuary’s cameras routed through the switcher. The matrix provides full video connectivity between the two venues within the church.

The fellowship hall’s odd shape made a distributed sound system the best choice for full coverage. AGI specified 19 pairs of Extron 2×2 drop-in ceiling speakers, along with nine Tannoy CMS801 in-ceiling subwoofers. The speakers fit unobtrusively in the space of one ceiling tile. Because cutting tiles would have required specialized skill and knowledge, and could require a long learning curve with lots of opportunities for expensive errors, the “drop-in” aspect of these models made it possible for volunteers to complete the task. “The volunteers just had to take a tile out and drop a speaker in. It was that easy,” Anderson said.

AGI Professional completed the sound design, mapped out speaker placement and supervised onsite while Sunnyside’s volunteer labor placed each speaker into its appropriate spot in the existing drop ceiling. “The speakers sounded good, the coverage was good and the ease-of-installation was amazing,” Anderson said.
An M-300 V-Mix 32-channel digital console from Roland gives volunteers a mixing interface similar to what’s used in main sanctuary, making it easy for volunteers to transition from one space to another with minimal training.

The AV systems in the fellowship hall offer the flexibility the church requires to host a variety of events, full services or overflow from the main sanctuary, all within the church’s modest budget. Meanwhile, the sound and video in the main sanctuary allows the church to take worship to the next level, even inviting popular gospel acts and other performers into the space. Russell noted that, when the church recently hosted a local gospel act, the Heritage Singers, “Everyone, including the musicians, was blown away by the quality of sound we had to offer.”

He added that, when congregation members entered the sanctuary for the first Saturday after the project was complete, there was some hesitation. “When people saw the 16-foot screens, at first they weren’t sure. But the first service where we used the new sound and video systems, people were floored. Overall, the response has been incredibly strong.”

Previous ArticleImmersion Is Key: In Retail 4K displays, systems control and bigger audio offer an expanded customer experience.Next ArticlePersonal Audio Tune-Up: For the price of a plug-in, make an investment in yourself.