A recent discussion with another consultant and client made me realize that many people, who I thought should know better, really don’t “get” intelligibility. It would appear that a large number of people think that it is a “black and white” issue (i.e., something either is or isn’t “intelligible”). In reality, however, intelligibility actually relates to shades of gray. Fifty delineations (i.e., 50 shades of gray) might be pushing it a bit (in more ways than one), but there are certainly different “shades” or degrees of intelligibility. I think that most people can discern at least six or possibly seven levels of intelligibility, and no doubt a trained ear and brain can distinguish a few more.

I generally categorize the level or degree of intelligibility perception on a scale as follows :

The equivalent “gray scale” is shown in Figure 1.

Some people may have difficulty in distinguishing between the Very Good and Excellent categories, but otherwise the scale can be recognized as distinctly different perceptual changes. At one stage, I thought it would be handy if I were to relate the various categories to objective values, e.g., using the STI (Speech Transmission Index). The problem is that, subjectively (and that, after all, is how we all normally rate intelligibility), the context in which the speech is heard also plays a part in our judgment. For example, if the intelligibility were to be measured objectively, my rating of Good for a railway station PA system would not equate to my Good rating for a theater. Typically, these would be about 0.1 to 0.2 STI adrift.

And this is where the discussion that I mentioned at the start of this piece actually began. The other “consultant” (I use that word advisedly because, in my view, the term should be reserved for someone who knows what he is talking about) was trying to claim that a sound system having an STI value of 0.5 in an auditorium would be just fine. No way! It has to be well over 0.65 for the intelligibility to be acceptable in this context. 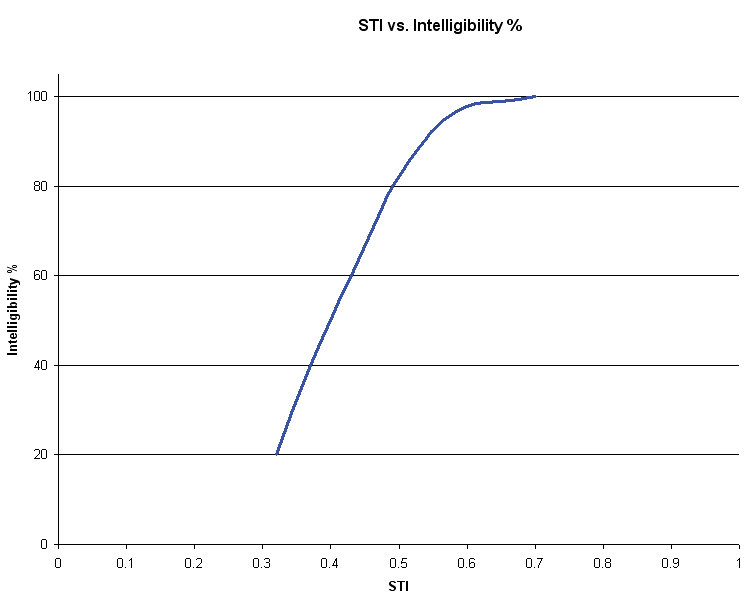 Another problem in trying to categorize intelligibility is that it is a highly non-linear attribute, because sometimes small changes in the interfering parameter can make large differences, not only to our perception, but also to a resulting objective word score result. Take, for example, the word score recognition curve shown in Figure 2. Under these particular test circumstances, a change in the measured STI of, say 0.1, in the region of 0.5 to 0.6 STI, causes a quite significant change in the perceived intelligibility to occur: 16%, in fact, but a change of 0.1 STI in the region of 0.6 to 0.7 produces a perceived change of just 2%. Now that’s what I call “non linear.”

However, under a different set of circumstances, changes of 0.1 STI produced quite different perceptual intelligibility changes, exhibiting a difference of 7% at around 0.5 STI and 3% around 0.6 STI, as shown in Figure 3. 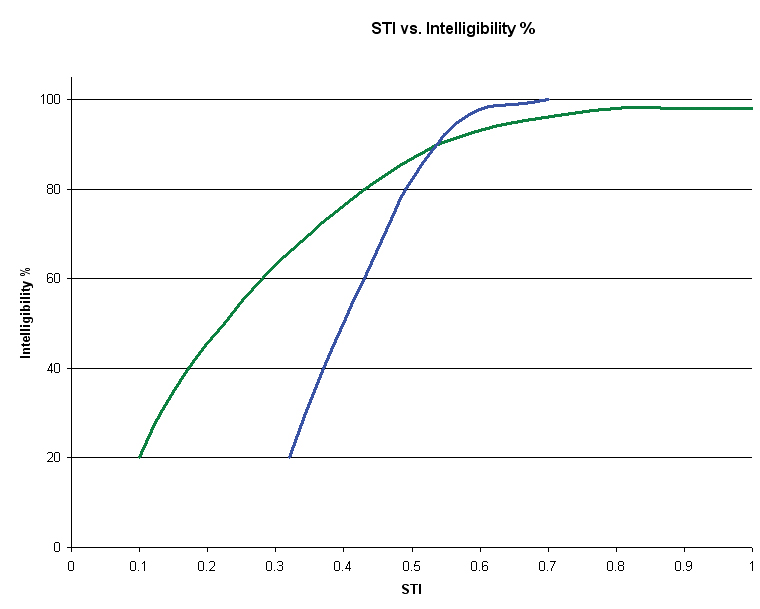 So, you can see, depending on where you are on the curve and what the experimental condition is, you can get quite different intelligibility perceptions for similar changes to the interfering or detracting source. As I have remarked before, the complex thing is intelligibility! No wonder it confuses the old gray matter. Speaking of which, I am off to tackle some further shades of gray: I wonder if I will get to 50?