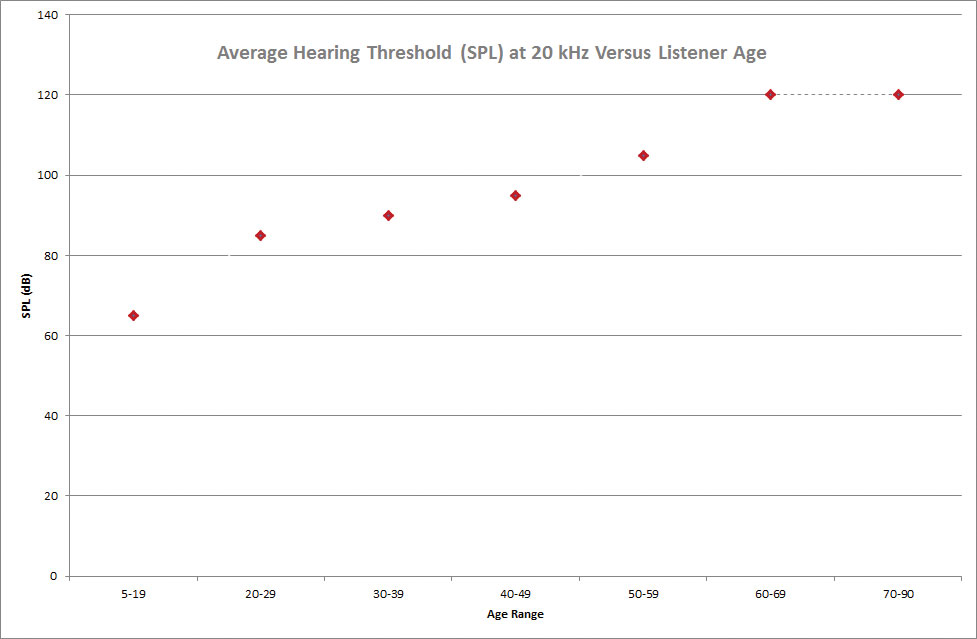 Average threshold of hearing at 20kHz versus listener age.

All day, every day, and all night, every night, we are surrounded by and exposed to sound. Unlike our sense of vision, we cannot turn our ears off. They are always switched on and listening to, and sensing, what is going on. Sometimes, we can consciously try and focus on something else…but we cannot stop our ears from listening, even when we are asleep. To modify a well-known question, “Is sound there if we can’t hear it?”, the answer is a resounding yes! Indeed, sound that we are not hearing may be affecting us in quite a number of ways.

At the top of the list, I would put ultrasound, which is sound that is beyond our upper hearing range. Although most of us cannot hear it, there is a good chance that we are exposed to ultrasound more often than we think. Most of the time, this will be unintended exposure, but other times, it could be very much intended.

Ultrasound (usually defined as sound that has a frequency of 20kHz or above), for example, is employed in a number of common devices, ranging from PA systems to door sensors and body/tissue scanners. Effectively, there is no upper range to the ultrasonic region, and some ultrasound devices work well into the MHz region. Here I am thinking of body scanners, the most common being the ultrasound scans used for prenatal examinations of babies in the womb.

However, just above the audible hearing range, ultrasound also finds a number of other applications. These vary from PA system surveillance and monitoring to industrial cleaning and pest deterrents (which can include teenagers!). There is also the high-end audio fraternity whose members are of the firm belief that music recorded and played back with a bandwidth greater than 20kHz is both audible and sounds better. I am not going to debate that application at the moment, but it is interesting to note that a series of medical tests, employing spontaneous electroencephalogram measurements (alpha-EEG), showed increased activity of statistical significance when subjects were exposed to sound containing frequency components above 22kHz.

Instead, I want to focus on some of the effects of unintended exposures to ultrasound and, indeed, audible sound, come to that. As I have noted before in “Sound Advice,” our hearing deteriorates with age (presbycusis), such that we lose our sensitivity to high-frequency sounds, with men generally being more affected than women (don’t ask!). However, most audiograms (hearing test measurements) only check up to 4kHz or, more recently, 8kHz. There is little published information about how we hear above these frequencies. Some research is available, however, and in the accompanying graphic, I have plotted the effect of age versus the average threshold level for listeners at 20kHz.

Remembering that 0dB SPL is defined as the threshold of hearing at 1kHz, it can be seen that, at 20kHz, most people would require the sound level to be at least 65dB before they can hear it. However, some people (and children in particular) are much more sensitive than the average, so may need the level to be only 30dB to 35dB to be audible. Note that I used the word “audible.” That is significantly different from being aware of the sound and it having an effect on you.

High levels of ultrasound have, for example, been associated with nausea, migraine, dizziness, tinnitus, fatigue and an uncomfortable feeling of “pressure in the ears,” as well as a general feeling of uneasiness, although the sound producing these effects may not actually be audible (i.e., the sound is affecting us but we can’t actually hear it). Interestingly, one of the medical uses of ultrasound is a treatment to lower blood pressure. Now there’s a conundrum!

Most sound systems used for emergency announcements employ ultrasonic monitoring of one form or another to ensure that the system is operational and ready to use when needed, with the electrical tone being continuously monitored and any disruption of this immediately causing a fault indication and alarm warning.

A by-product of this monitoring is that the system loudspeakers will be unintentionally emitting the ultrasonic monitoring frequency, which is usually in the region of 20kHz to 22kHz, though this varies between manufacturers. (Some monitoring signals can be as low as 18kHz or as high as 25kHz.) The emitted ultrasonic levels from PA systems are rarely measured (it’s actually quite a tricky thing to do). I have measured levels of up to 85dB while I am also aware of credible reports of levels up to 94dB. I currently have a research project underway to look into PA system emissions and may raise the issue again here in the future. Most systems are probably absolutely fine; it’s just that, at the moment, we do not know with any certainty exactly what is being emitted.

Sound influences our lives in many other ways, be they conscious or not. For example, sound has been shown to affect the taste of, and our attitude toward, food. This can be from both background noise and from the sound that the food itself makes: the “crunch” of a potato chip, for example (which, interestingly, contains supersonic energy components).

Other research has shown that music can enhance the flavor of a meal, particularly if it is from the same country as the food! Associated research has also shown that listening to classical music when drinking wine can make the wine taste more expensive. In general, the more you like the music you hear when eating (or drinking), the better your culinary experience will be. Slow music can make flavor sensations last longer, while up-tempo tunes mean that they diminish faster on the palate. Furthermore, too much bass can make food taste bitter! Noise has also been linked to obesity, particularly for those living in noisy neighborhoods.

The way in which our senses are linked is a highly complex subject that is still being explored. Our natural neural plasticity, for example, enables us to retrain our brains or use areas of the brain associated with one sense for another. Clearly, there is more to sound than just listening. 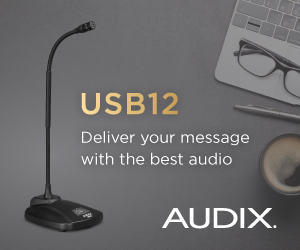