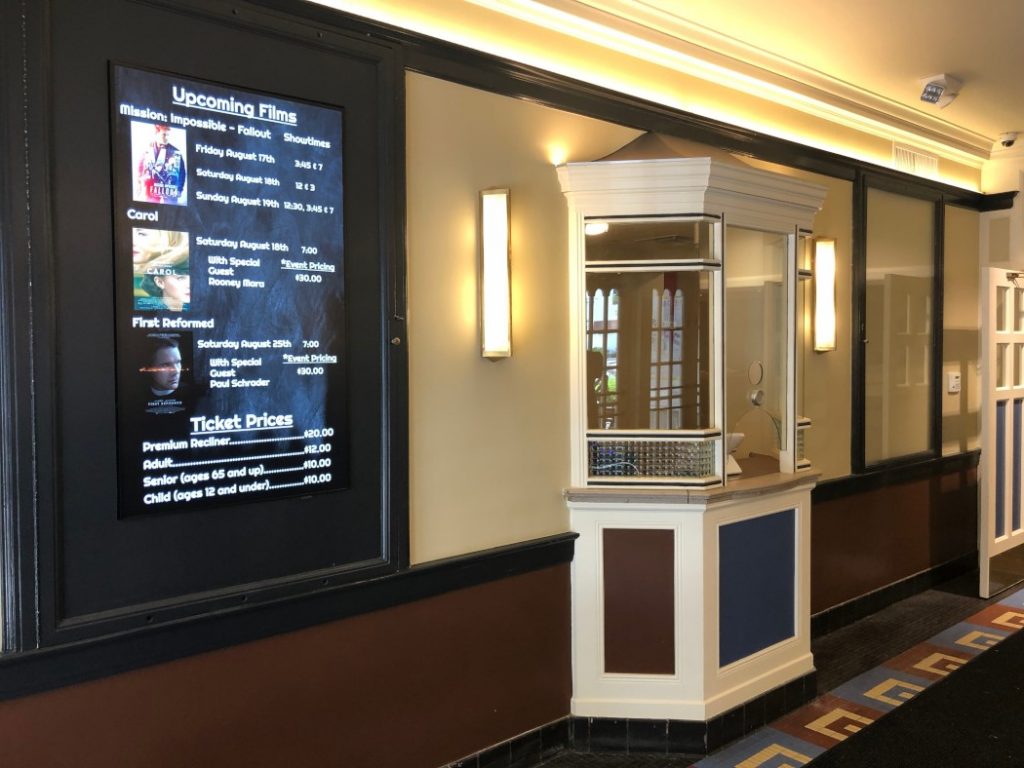 Bedford Playhouse recently replaced its static poster box with an ultra-thin display screen that fit into the existing space.

When replacing static signs with digital displays, or even installing a new signage network for a corporate or institutional client, it is important to select products that will aesthetically blend in with the user’s environment, as well as to design a system that will be comfortable for the client to use.

With the abundance of high-quality products now available, finding the right components for a digital signage system might seem like a no-brainer. However, it takes a clear understanding of the user’s needs to sort through the numerous options for display screens, media players and content management software (CMS) platforms to arrive at a solution that suits the client’s process, staff, budget and communication needs. If a client’s team hasn’t previously deployed a digital signage network, it is important to inform them of the recurring costs, such as weather/news feeds and CMS licensing fees. In addition, a client should be advised about the technical level of expertise required to operate the system and the need to refresh content regularly, as well as the training available for personnel authorized to operate the system.

Let’s take a look at a recent installation to glean insights on project priorities from a user’s organizational perspective. At the time of this writing, Bedford Playhouse in Bedford NY was in the process of renovation, having completed work on the main theater, which is now open. It was still building out two auditoriums and a café, which are expected to be fully functional by the end of this month. The project includes one digital signage display in the ticket booth, another at the concession stand in the lobby area and a third in the Wine Room. I spoke with Bedford Playhouse Board Member Kim Speegle, who was involved in the digital signage portion of the project, and Gregg Paliotta, President of Digital Media Systems, the systems integrator for the entire AV systems design-build project.

Discussing the organization’s move from static signs to digital displays, Speegle said, “The movie house was built in 1947, and we are completely renovating it. The advantage of digital signage is that it gives us a lot of flexibility on the content—not only to alter prices for events, but also, if necessary, to change the entire look and feel of the creative. We wanted a format that would be easy to read and easy to update. For the concession stand, we wanted a design that mimicked an old-fashioned chalkboard.”

Other than cost, the Playhouse did not have specific requirements for the signage system. In addition to motion-picture screenings, the renovated Bedford Playhouse plans to host musical and live theatrical events, plus seminars and workshops led by the area’s many accomplished artists and performers.

The ticket booth display monitor is a Samsung 55-inch full HD commercial smart edge-lit LED LCD TV, paired with a Roku media player and BrightSign software. “We selected this commercial-grade display because of its ultra-slim design, which fits right into the old poster box, and for its high brightness, because of the bright ambient light in this area,” Paliotta explained.

The concession stand display monitor, a Samsung 55-inch 1080p direct-lit LED LCD TV, was selected and purchased by the Playhouse. Speegle noted that she had seen a local café’s digital menu board and discussed the system with the business. “The café used SignMenu software for content creation and recommended it because it was easy to use, and because the annual license is inexpensive,” she noted. Currently, content for the concession stand and ticket booth displays is created and stored on the cloud-based SignMenu platform. Speegle said that the Playhouse is not currently using BrightSign because it hasn’t yet received training on it.

The original specification for the Wine Room display was changed. “This location was going to get a commercial-grade 55-inch signage monitor, but, after a conversation with the client, it was decided to put the money into a high-end consumer LCD TV, because this space is more of a living-room scenario and bright ambient light is not a problem here,” Paliotta explained. The sources for this monitor are a local AV receiver, Blu-ray player and streaming over Cat6. “The speakers for four channels of surround sound are in the ceiling. When the receiver and TV are not in use, this room has the capability to be on the distributed audio network. The surround speakers in the ceiling automatically switch over to distributed audio when the AV receiver is not in use,” Paliotta noted.

Outputs from all the matrix switchers are designed to feed projectors in each theater, as well as signage monitors in the lobby area. Displays are connected to the network via Cat6 cables. A master 4K Kramer 6×6 matrix switcher allows HDMI sources from each theater to be projected in any auditorium and/or sent to signage monitors in the lobby area. The goal here was to maintain the classic feel of this historic facility, while providing the versatile video experience available at modern theatrical venues in nearby New York NY.

This project is a good reminder of the key factors necessary for success. The importance of educating the client and other stakeholders on the criteria used in the selection of both hardware and software can scarcely be overstated. For example, the choice between consumer- and commercial-grade displays might not be clear-cut—users have to understand the tradeoffs in terms of Total Cost of Ownership (TCO). It might be more difficult to explain the relative advantages of different software platforms, such as programming flexibility—but it is even more important to do so.

If your project involves replacing street-facing posters with digital signs, it is imperative to check local regulations. You might need to get approval from the town’s Planning Board or other regulatory authority. If you are considering responding to a request for proposal (RFP) on restoring an iconic billboard or historic theater, you might benefit from reading my article, “Upgrading Iconic Displays,” in the August edition of this magazine.

Successful digital signage deployment requires flexibility on the part of all stakeholders and team members working on the project. In the Bedford Playhouse project, a continuously collaborative process assured that the ultimate solution successfully blended the technical, aesthetic and functional requirements of the client.