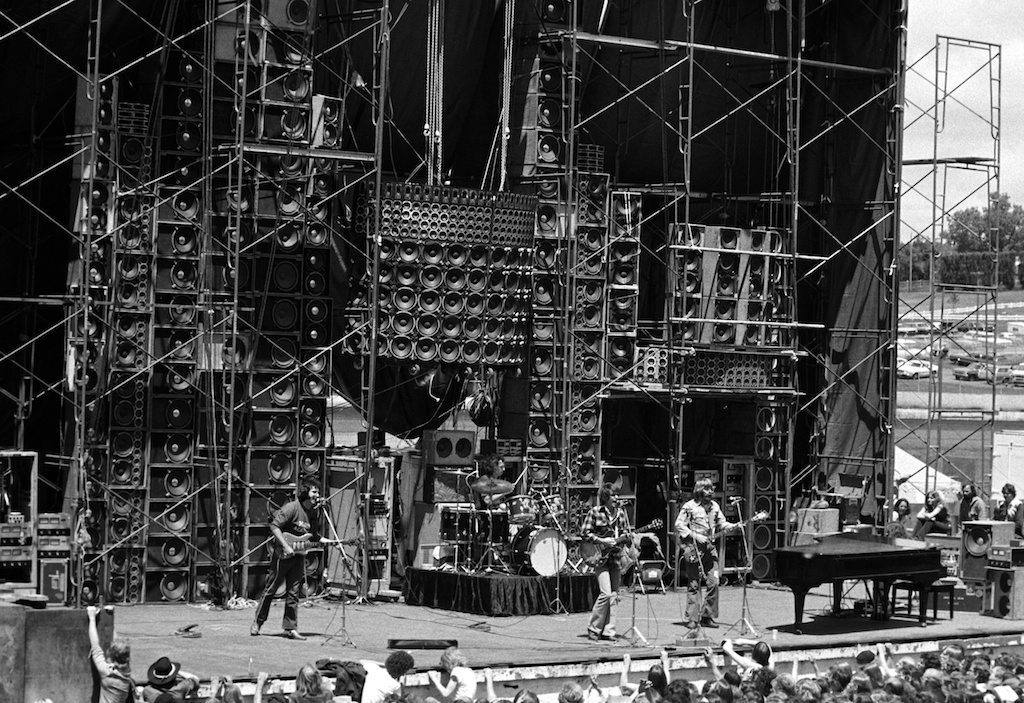 Anyone interested in concert touring sound should have watched the Grateful Dead documentary “Long Strange Trip.” Owsley “Bear” Stanley’s Wall of Sound, which debuted in 1974, was—and still remains—one of the finest sound systems ever implemented.

Let’s first give credit where credit is due: Bear’s team of Dan Healy, Mark Raizene, Ron Wickersham, Rick Turner and John Curl, along with Jerry Garcia’s significant financial largesse, helped define the performance quality expectations for today’s large-venue touring sound systems. They wanted, and they got, the best sound possible—a system throw capability of 600 feet to 1,500-plus feet, with no delay towers.

To give some perspective, fewer than 10 years earlier, The Beatles toured the US with what was basically a distributed movie theater system, which was never intended to support large crowds and which, to a large degree, failed. Note the sea change in audio system design. Rarely do performance and technology advance quite so quickly.

The Wall Of Sound

Let’s look at some of the factors that made the Wall of Sound so unique and remarkable.

Alas, the Wall of Sound was wildly impractical from a logistical (i.e., monetary) standpoint. Installation and repacking required two separate sound systems to be leapfrogged between venues. Four semi-trucks, along with a crew of 21, were required to transport each system.

Roy Clair’s early ’70s concept to hang speakers from a truss, rather than stacking them from a floor, presented several immediate advantages. Most importantly, artists got their floor back, with only small stage monitors. Adding to that the ability to rent a system for a tour’s duration meant that better, more consistent sound quality was available at a lower cost. A new business was born. No longer did artists have to buy their own system to avoid a less-than-ideal house system. A few artists still did, of course, but they were the exception, rather than the rule. These were indeed salad days for sound system providers.

All great apple carts, however, tend to get tipped. Concert promoters took over the business with pre-packaged deals for artists, guaranteeing themselves profits with virtually no risk. Even as ticket prices went up by a factor of five, every other aspect of the tour was quickly ground down, including sound system providers. As rental prices decreased 50 percent or more overnight, firms and systems folded and merged rapidly.

Clawing back to being profitable meant playing the game smarter. At their core, line arrays are a brilliant piece of mechanical and electrical packaging; they allow a minimal crew, in a single truck, to deliver and rig a system that’s comparable in performance to the Grateful Dead’s Wall of Sound…all in a couple of hours.

Yes, line arrays require a monitoring system, and they don’t have a dedicated set of amplifiers and speakers per instrument. However, the total cost of system ownership is significantly less, primarily because labor and transportation costs are lower. And, they get a similar number of drivers in front of the audience…quickly. Their development required a new generation of speaker drivers, amplifiers, structural design and power distribution.

Those 48 McIntosh MC-2300 amplifiers in the Wall of Sound, by themselves, weighed 128 pounds each…more than three tons collectively. It’s no wonder that an emergency delivery of more amplifiers to a Watkins Glen NY concert almost crashed the helicopter when the crowd overflowed the facility.

Today’s single-rack-unit amplifiers (many with DSP processing capability included) deliver six times more power, at one-sixth the weight and one-sixth the size, for roughly the same amount of money as those McIntosh behemoths. (Bear was a bit more LSD than DSP, anyway.)

It could be argued that today’s industry offers a more practical, more repeatable, more profitable version of the Wall of Sound, with significant efficiency improvements. But does it sound better? Never having heard “The Wall” myself, I can only depend on three industry veterans, whose opinions I respect. Each provided a similar answer independently—they preferred “The Wall,” but not by much.

It was Bear’s vision that showed us what had to be done. It took the many smart businesspeople who followed to show us how to do it cost effectively.