To rephrase an old saying: What happens at the Sake Rok restaurant won’t stay in Vegas. It will remain with you. That’s because the new hotspot features memorable combinations of Japan’s vibrant pop culture along with often spontaneous short performance pieces performed on the main floor. The choreographed entertainment features wait-staff-turned-dancers to the surprise and delight of customers. Playing back the dance music, lighting cues and videos at the touch of a button was a programming feat for the integrator.

Sake Rok, one of the newest Las Vegas venues opened in spring 2016, is located in The Park, in front of the new T-Mobile Arena on Las Vegas Boulevard between Monte Carlo and New York New York (see post, “Sake Rok In The Park”). The location, comprising more than 13,000 square feet, features a mezzanine (second floor) that overlooks the first-floor bar, dining room and sushi bar for a combined 200 seats. The top floor consists of an event space, called Sakura Terrace, which seats 150 comfortably and opens up to a 1300-square-foot balcony that overlooks The Park, the arena and the Las Vegas Strip. 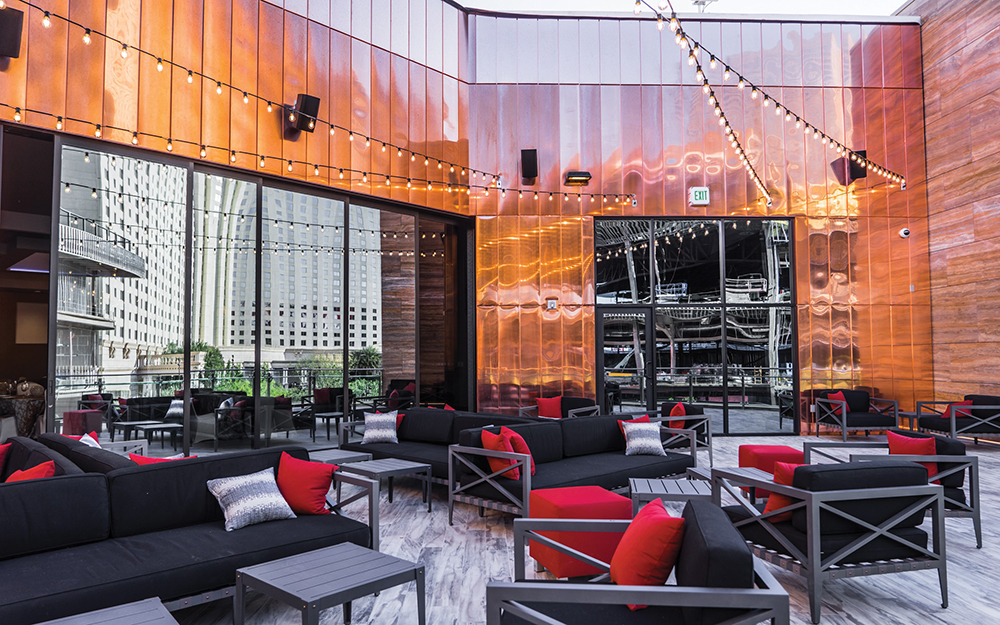 By night, Sake Rok is a theatrical hotspot when transformed into a high-profile social dining extravaganza, immersing guests in an experience that is part culinary, part performance and completely unexpected. As inspired by Japan’s vibrant pop culture, restaurant servers double as entertainers, inviting guests to partake in restaurant-wide camaraderie.

Thus, customers can expect the unexpected, including restaurant-wide sake bombs, impromptu dance parties and lip-sync serenades. An outlandish and extravagant master of ceremonies will keep the energy and the sake flowing late into the night as Sake Rok transitions into a lively bar and lounge.

“The needs of the client were based on the fact that Sake Rok is a high-end sushi restaurant that provides an entertainment aspect to the dining experience,” said Johnson. “That means that, when they hire wait staff, they’re going to hire experienced dancers who can be taught to be waiters.”

Johnson noted that the first challenge was being called two months before opening day. “By the time we got all the business done, we had about six weeks in order to do the project, from front to back. So that was a pretty considerable challenge.” Another major challenge involved providing coordinated AV and lighting to accompany the short performance pieces that are comprised of a dozen vignettes performed by the wait staff. These sporadic performances were choreographed by JACS Entertainment with dynamic digital content by Space Cadets AV.

“Sake Rok wanted lighting, video and music coordinated, to be activated on a single button press,” explained Johnson. “They didn’t want an operator other than the DJ starting the show with one button.” The DJ plays music via a Pioneer Pro DJ multiplayer and accompanying Pioneer DJM-900NXS2 four-channel digital Pro DJ mixer from the booth during dinner. There are two Pioneer XPRS 12, 12-inch monitor speakers, as well.

Then, on cue, the DJ would start the programmed show via an iPad, and it’s show time! The Mackie 1604 multi-channel compact mixer has the overall show control audio, including the Shure wireless SM58 and Shure SM35 headworn mics coming into the system and the background music. 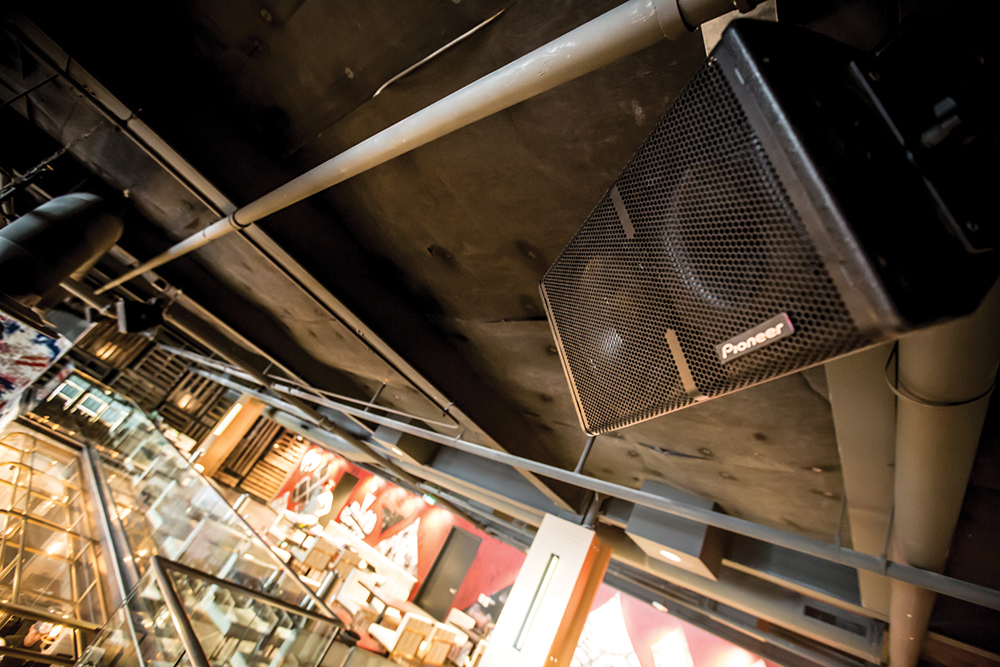 Production programming had to be expedited because of time constraints. “One complication we ran into was the quick timeline,” explained Johnson. “Normally, we’d have rehearsals and bring in a lighting guy, who would have gone over lighting cues. We’d have written everything for each vignette to go with the actual song playing and accompanying video, making it appear seamless.”

However, that tried and proven show biz musical rehearsal method had to be modified. “Unfortunately, rehearsals started a couple days before opening,” Johnson continued. “We had to do it on the fly. We brought in a couple of our lighting program guys who do concerts and are used to working that way.”

Thus, the integrator ran tech support live for shows the first couple of nights after the restaurant opened, and recorded them. The Alcorn recordings were edited a bit later to sharpen the cues. “The Alcorn has a program that can be logged into to record all the DMX lighting commands as macros,” said Johnson. “When we start the show, the DMX passes through the Alcorn to run the Hog show lighting as an effectively timed DMX file.”

Most of the speakers chosen for the main room were Pioneer 10-inch XY-101s with 10-inch XY-118S subwoofers. “Pioneer has a line of speakers built especially for the nightclub market,” Johnson pointed out. “Pioneer…worked closely with us to make sure the client was happy. On a project like this where we have a tight deadline, it was important we could get everything as quickly as possible. They had a good inventory.

“The day Sake Rok opened and had its first crowd, and the place was packed, the owners came up to us and said, ‘It sounds amazing.’ So they were really happy with it,” Johnson said. “We wanted to provide a nightclub-level sound system that would be really intelligible. It would be capable of producing the kind of quality you’d expect for a Vegas-type show, while at the same time producing background music that wouldn’t interfere with conversations. When you’re sitting in the restaurant, you can have a conversation and still hear every word of the song playing. It’s a rare combination to get that kind of quality with background music and not having to yell at the person sitting across from you.”

The main floor’s 13 full-range Pioneer speakers are mounted off the ceiling on a yoke cradle. They’re installed on the outside of the room firing inward. “We chose the center point of the room and delayed back from that point,” stated Johnson. There are also two XY-101s hanging above the adjacent outside bar.

“The three Pioneer subs are mounted as close as possible, but not directly, onto three corners,” continued Johnson. “We wanted as much low-end presence to the room without loading in weird places. Every one of the subs has a four-point attachment to the structure. The reason we didn’t attach directly to the structure is because the contractor worked pretty hard to soundproof the third floor. So, if there was a separate function on the third floor, we wouldn’t get a lot of sub vibration between the floors because there wasn’t a lot of low-frequency transfer between the floors.

“In speaker placement, we also had to deal with the Christie DLP projectors on the main floor [to preserve the sightlines],” Johnson explained, adding, “I’m very happy with the low-end presence, enough so it’s heavy for a restaurant but light for a club.” The only other speakers on the main floor are two Martin Audio C6.8T ceiling speakers in the restrooms.

Two Christie DLP projectors are dedicated to displaying videos in the main floor area. One displays videos accompanying performance pieces in the restaurant. Custom screens were provided by general contractor Tre Builders, Las Vegas. The projector fires on a video map “brick wall,” which is coated with Goo Systems Screen Goo. “When it’s not showing a video, it looks like a brick wall. It works perfectly in the space we put it in,” said Johnson. 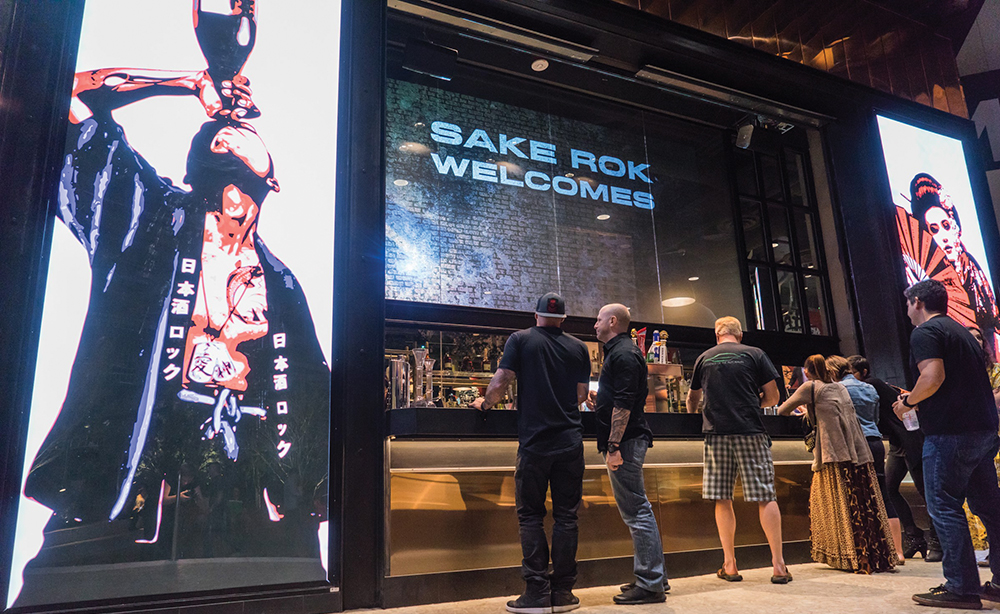 The other Christie projector shines outside in the bar on a glass surface with specially coated projection screen film that allows video imaging, while still allowing people casually walking by in the park to see through the glass. The attention-grabbing screen shows such content as a ballgame or a Sake Rok flash reel. In addition, there are two LG 32-inch LEDs on Crimson mounts in the outside space bar area, which serve as menu boards showing food, drink specials and information about the bar.

There’s an RGB Spectrum QuadView UHD multiviewer to add some additional entertainment to the projectors downstairs. That way, the Christies on the main floor or in the adjacent outside bar can have four games showing on their respective custom screens.

There’s an additional little banquet space on the second floor with an outdoor patio. This second floor/mezzanine balcony has four QSC eight-inch surface-mount speakers on the outside. They were chosen because the smaller area didn’t require as much power, nor as much throw.

The large top, or third, floor can accommodate a wide range of events, including banquets, ballroom gatherings and corporate meetings. AV presentations are supported by an Oppo Blu-ray player, several LED screens and speakers. Ten QSC eight-inch surface-mounted speakers serve the outside patio because they are weatherproofed for that environment. Inside the room itself, there are seven Martin Audio C6.8T ceiling-mounted speakers and one QSC dual 12-inch subwoofer. The owner supplied three LED screens, including two 65-inch Sony models and one 90-inch Sharp. The displays have Crimson mounts.

AV distribution is via the AMX Enova system. There’s a mix of HDMI and AMX input and output cards. Therefore, all AV is routed throughout the venue. If someone decides to rent the whole space, from the first-floor restaurant through the third floor, they can route AV on the main-floor Christie projectors to the three top-floor LED screens, and vice-versa. There’s full DirecTV access, as well.

Regarding the lighting system, “We’re running High End Hog 4 PC lighting on a Dell computer,” said Johnson. “And we’re using a Hog DMX Widget that goes through the Alcorn McBride show controller. It’s a pass-through most of the time for ambient light. Then, when the show starts, the show control plays back the DMX and effectively mutes the output that comes from the Hog 4 PC. 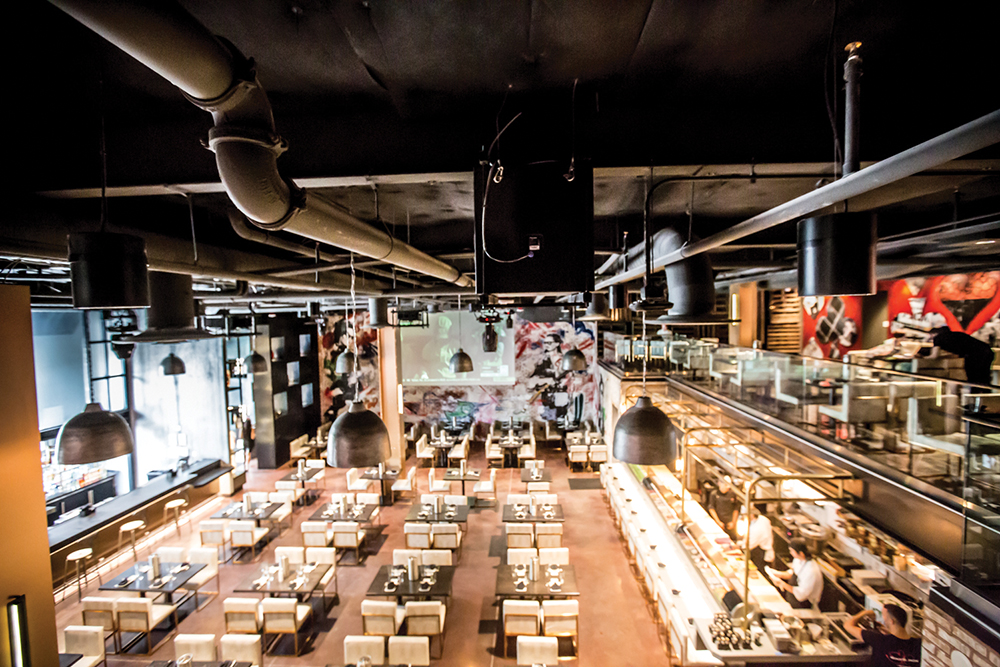 “We had to do the lighting on a relatively tight budget. There are just four Chauvet spot LEDs in a square over the restaurant. We were able to do a reasonably good show between that and the house lighting. The client wasn’t looking for something over the top. They were looking for something that they could follow the dancers around with and do an effective choreographed routine.”

Johnson noted that the client was happy with the AV. “They were happy and so was Pioneer, so they threw their InfoComm party there!”