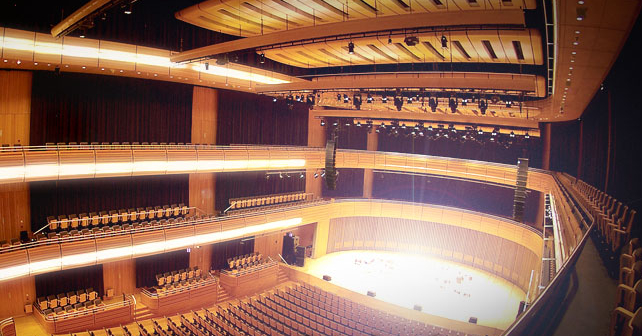 The Sage Gateshead, an iconic multi-arts building in northeast England which originally cost £70 million to construct, celebrates its tenth year this year. For its landmark birthday, the venue has upgraded the sound system in its 1700-capacity Hall One with the installation of an RCF HDL 20-A line array by local contractors (and longtime RCF rental partner), Nitelites. The move follows a period of evaluation by the facility’s Head of Technical Operations, Chris Durant, and his team, during the many occasions the HDL20-A has been flown on a temporary basis to support the house system.

Home to Royal Northern Sinfonia, and host to a concert agenda that includes jazz, folk, country and rock, the original beam steering system had rarely kept pace with the Sage’s promotional ambitions, so Nitelites found themselves hiring in their RCF TT+ and HDL rigs. Eventually, Nitelites’ MD, Jamie Moore, proposed that a flown HDL 20-A be installed on a permanent basis. The PA covers the ground floor, two balcony tiers, and is split into 12 zones. Nitelites detailed 12 HDL20-A enclosures for each flank, rigged on a flying frame which will take up to 16 elements.

The rest of the complement comprises three HDL 20-As per side as portable ground stack on custom dollies, atop a SUB 8004. A separate stack features three SUB 8006s in a reverse cardioid pattern (one rear facing), with an HDL 10-A on top. Two HDL 10-As are also used for under-balcony infill and four as front lip fills. On the sides of the main hang are four RCF TT08s for outfills.

Durant believes that Nitelites’ attention to detail in tuning the system has enabled them to get an additional 30% from the system. “We’ve had pretty much every big system in here and our new in-house RCF house rigs sounds better because temporary systems have to be set up so quickly; this been tuned to within an inch of its life,” Durant explained. He presented Nitelites with a matrix containing different performance scenarios for which gain structure presets were created. Via the DSP, Sage Gateshead can turn zones on and off in the PA at will. “It’s far more efficient than changing the angles of the boxes every time we needed a new configuration,” Durant noted.

He highlighted other advantages of the HDL 20-A. “It’s also easy to groundstack, and the position of the fly frame is mirrored on the subs so it’s easy to interlock; it’s convection cooled so there is no buzzing, which is vital in a critical room where a low noise floor is required. It’s also very efficient energy wise, and we don’t need to run extra power in.” All of which should future-proof performance requirements for the foreseeable future.