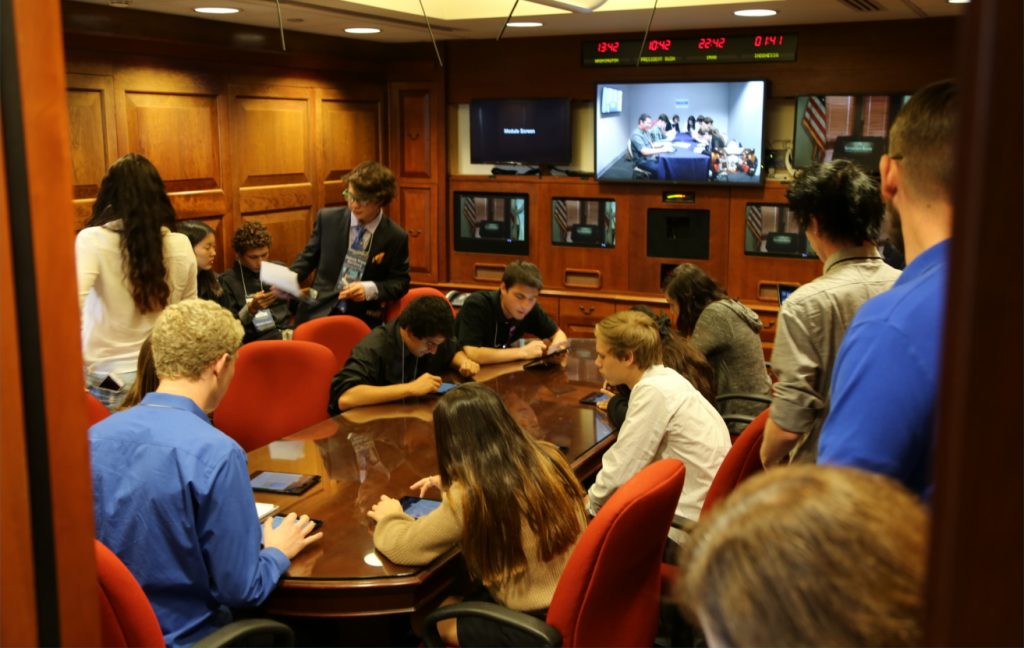 BCS (before computer simulations) current events were considered about as popular as watching grass grow, aside from discussions and role playing in school. There was no active participation. Games were played mainly outside in a park, with the exception of board games or crossword puzzles inside the house.

Fast forwarding to the present, students are most fortunate to be actively immersed in a fictionalized AV simulation based on a real-life event: the assassination attempt on President Ronald Reagan. Thus was developed the Situation Room Experience (SRE) at the Ronald Reagan and George W. Bush Presidential Libraries that are located, respectively, in Simi Valley CA and at Southern Methodist University in Dallas TX.

Others involved in the project include Director of the Reagan Library R. Duke Blackwood, as well as Writer/Designer Trey Alsup.

This project was a team effort of people with diverse skills, including high school teachers, district-level administrators, university professors, Hollywood designers, technology integrators and a designer/writer.

Cohen, who has been with the Reagan Presidential Library for 11 years, told us, “This is our second major project of its kind. The last was the Discovery Center that won an entertainment award, which was accepted by Curtis Kelly and me.”

According to Cohen, “The current Situation Room scenario is a modern fictional foreign policy crisis that was written specifically for this room. It centers on examining the 25th amendment and accession of power: What happens if the President and the Vice President are both out of commission? Who takes charge? When, where, how and who decides these types of things? It’s really using the historical archival content; we have 60 million documents from the Reagan administration. So, we study these and use them as a model for the modern fictional crisis. We’re hoping to build out other scenarios in the future on a range of topics.”

Regarding the creative team, she said, “It was a skeleton crew. We were very nimble and able to be to be very innovative. I was the team lead guiding the project with an educational objective.

“I like the flexibility of the AV, so we can also use the space in the Situation Room Experience for meetings and conferences in other forums. I like the capacity that is built into the experience to have a variety of AV opportunities, synchronously, which is how so many people receive information in the 21st century via a tablet.”

Blackwood stated, “In his speech at the opening of the Reagan Library in 1991, President Reagan described Presidential Libraries as the ‘laboratories of democracy.’ By integrating cutting-edge educational theory and gaming design with rich historical spaces and new technologies, we have created an exceptional learning laboratory unlike anything that exists today.”

According to Shipe, the design took six months and the construction another six months. He pointed out three challenges. “One was the budget,” he said. “We had to fit the game design, construction, staffing and promotion all into the same purse of money. We did a design/build, and because the Reagan Library put in a lot of elbow grease using internal staff, we were able to come up with a very nice product within budget.

“Another challenge was finding the right space for the libraries,” he said. The Reagan had the space for all three rooms by repurposing the former docent break area, but the Bush Library had only one room designated as the Situation Room. However, a multipurpose classroom functioned for the other spaces. The solution was a roll-in mobile cart used in the adjoining classroom during SRE.

“The third challenge was geography and two different time zones,” said Shipe. “The sites can be linked to play the game.

“It’s a partnership between two different libraries paid for by the same purse of money,” he said. However, it’s also a partnership among SenovvA, the Bush Library and the Reagan Library.

The project was the initial brainchild of Blackwood and Cohen. It was made possible by the support of the Reagan Foundation, as well as the Bush Library and Foundation.

“About a year and a half ago, I was called in by Duke [Blackwood] and Mira [Cohen] to do another simulation,” said Kelly. “SenovvA had done the Discovery Center six years prior. It was a lower level game-based educational simulator that we did for grades four to eight. The Reagan Grenada military action scenario won a TEA (Themed Entertainment Association) Best Educational Experience award, which is basically the Oscar of our industry.” The very popular simulation event has been experienced by hundreds of thousands of students since its inception in 2009.

From the success of the Discovery Center, Blackwood and Cohen called Kelly in to discuss a new game-based simulation of a historical event, which became the Situation Room Experience.

“There was no model for the project,” said Kelly. “The core production team, including a writer/game designer, technology integrators and programmers, art director and education director, had to build an entirely new experience to meet the objectives of the project” (see: “AV Simulation Features”).

Beyond working from scratch, the team overcame additional conceptual and design risks. Participants were asked to drive a process in which they are asynchronously engaging with up to 40 individuals from each location and challenged with multiple different decisions that flag game responses. “We were looking for a high level of excitement, engagement, enthusiasm and participation,” Kelly stated. “Additionally, because the topic is based on working with foreign and domestic policy issues, a basic understanding of political science, American government and American history is needed to fully access the content of the game.”

There are three areas in which participants interact with each other during the SRE, all featuring custom-designed furniture. The Situation Room has one large table, as well as benches along the side. Specifically, this is the real setting of the Situation Room. That is, the space in the Reagan Library has the actual walls, ceiling, floor (carpet), conference table, wall layout and paneling of the original White House Situation Room. After a remodel, it was archived in 2006 and installed at Reagan Library in 2014.

Regarding the related spaces, the press area has two levels, which we’ll describe later. In addition, there’s a hospital command center, like the one President Reagan used when he was recovering.

Let’s begin with a synopsis of what meets the eyes and ears of simulation participants in each of the rooms. All monitors are Chief-mounted NECs, which go through the Kramer 32×32 switcher/router. Students in the Situation Room make their gaming decisions via Google Nexus 9 16GB WiFi tablets.

In the Situation Room, wall monitors at the front of the room include a large centered 46-inch display and two 32-inch displays. They are augmented by four 24-inch LED desktop monitors with IPS computer security. There is a left/right pair of JBL 2P self-powered speakers behind existing Situation Room wall-fabric grilles. Surrounding the conference table are four Audio-Technica ceiling microphones.

The press and briefing room, which includes a mezzanine, has four 46-inch displays for viewing by the four news agencies. Accordingly, each of the monitors has dedicated NEC SP-TF1 thin side/rear-mounted speakers. The lectern has a Shure SM57 microphone for briefings. The second-floor mezzanine has a Press Room for two news agencies; the other two news agencies are located downstairs. That way, they have their own separate news bullpens. Two Middle Atlantic half-sized racks with Eaton UPS 5PX systems are located in a special niche on the mezzanine. In contrast, the Bush site has racks located in a closet behind that Situation Room. The hospital room has a 46-inch monitor with an accompanying Yamaha Soundbar. Two Shure MX202 drop-ceiling mics capture the audio.

Shipe noted that video cameras include a Blackmagic Design HD and Marshall HD-SDI mini broadcast cameras. The tripod-mounted Blackmagic Design studio camera points at the White House podium and can pan over to the broadcast anchor desk for that viewing aspect, as well. Then the video switcher switches at the appropriate time. “The hospital command room and the Situation Room use the Marshall point-of-view cameras,” said Shipe. “They’re tiny and just big enough to have a lens and a video sensor. Then an SDI connection sends it back to the Kramer router.”

Furthermore, Christie coolux Pandoras Box media server components orchestrate the media experience, which includes switching the cameras, using coolux Widget Designer. Shipe explained that the system functions on two timelines or two rails. The first rail is represented by the tablet where each student plays a different role. “The second rail is the media experience, which includes the microphones, speakers and displays,” he pointed out. “When the game starts, both of those rails start together. Content comes from the Christie coolux Pandoras Box media servers. We chose Pandoras Box because it can do so much. The Widget Designer feature allows you to control the entire experience from coolux.

“That’s probably the most important piece of the media puzzle. The coolux tells the Kramer video router where to switch, and the audio when to mute. When it gets to that point in the timeline, it’s preset to connect to the hospital command in the Situation Room, so you can do a videoconference between the two rooms.”

The QSC Core 110f Q-SYS audio DSP was chosen for both libraries. “It’s a very powerful processor,” said Shipe. “It has nice, modern-looking touchpanels that were easy to mount near one of the podiums, which allow them to do tours very easily.” In addition, the Polycom videoconferencing codec is used to connect the Reagan and Bush Libraries.

Editor’s Note: We would like to thank the interviewees for making themselves available during the holiday season to meet our production deadline.