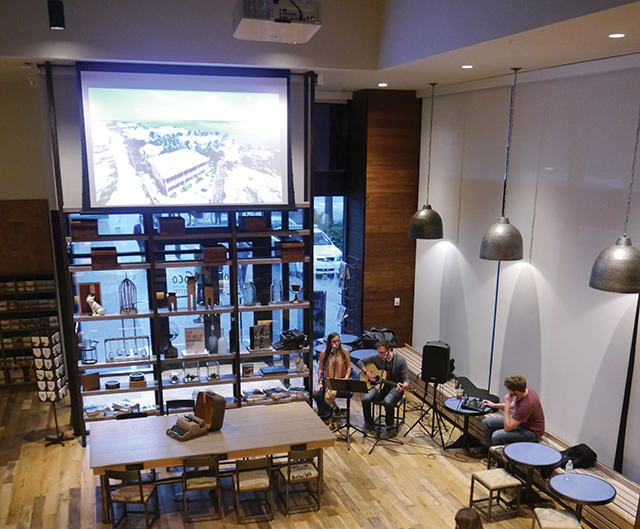 No matter the size and shape of the room or surface you’ve targeted for digital media display, projection may provide the best solution.

Although the latest LED displays excel when it comes to sheer size and flexibility, and LED backlit LCD flatpanels often provide the most bang for the buck, projection offers real advantages for a number of demanding applications. The latest crop of projectors offers higher resolution and brightness levels coupled with smaller footprint, increased energy efficiency and lower cost of ownership (particularly in “lamp-free” ones). These new models have broadened the range of public display and signage applications where projection is a better choice.

Sometimes, architectural considerations point toward the use of projection. Displaying signage content on large glass windows can be done easily with rear projection onto translucent screen film. The self-adhesive films are easily installed and do not require intrusive wiring or mounting hardware. Notable for this solution are the 3M Vikuiti Rear Projection Films used in many showroom window displays. Options from 3M and others include specialty projection films for use on mirrors, and for display of 3D, 4K or touch interactive content. Beyond projection on glass, advances in materials and mounting technology are also reflected in the wide range of new rear- and front-projection screens available today.

The development of lasers and LEDs as light sources has mitigated many of the issues associated with lamp-based projectors, and has opened up opportunities for numerous applications in signage and experiential visual spaces. TI’s DLP visual engine, in a plethora of projectors, has also paved the way for creative applications of both high brightness single-chip and lighter-weight 3DLP models. Portable ultra-short-throw models from Casio, Sharp and other manufacturers are being used extensively in retail stores and museums. Mapped and unmapped projections on mannequins and virtual assistants are grabbing the attention of passersby in high foot traffic areas, such as malls and airport stores.

Projection-mapped deployments are on the rise, and range from massive images displayed on buildings and odd-shaped interior surfaces, to dynamic branding campaigns projected directly on cars, boats and even swimming pools. At many recent AV tradeshows, Canon, Christie, DPI, NEC, Panasonic, Sony and other manufacturers have demoed the most innovative uses of projection mapping on vehicles and wildly shaped surfaces. The intelligent projection mapping and masking capabilities now included with many installation-level projectors enable a variety of high impact visual experiences.

Advanced projection software can also simplify integration by reducing the time required for adjustments during installation. Some of the latest projector software includes automatic stacking, edge blending, image correction of projection over curved surfaces and image alignment in multi-projector displays. The recent release of Christie Mystique Install software (Pro Venue Edition) even includes features to simplify projection mapping on ice. However, before you say yes to a client’s shape-shifting dream display, be aware that getting the most out of this software may require special training.

But projection isn’t just for unique or difficult signage applications. A projector and projection screen still provide a cost-effective way to display large images in a public space. Beyond sports bars and large entertainment venues, projectors are increasingly seen as a viable choice where there is a need for an oversize screen, and where installation, lighting and other considerations create issues for flatpanel displays or videowalls.

Whether in a coffee house, boutique, mall or museum, advances in projection technology and the lower TCO (total cost of ownership) of new models are putting projectors back in digital signage.