As Plopsaqua Project Manager Steve van Camp explained, “We didn’t want to build a traditional indoor swimming pool. We opted for a closed construction, allowing us to implement and control special effects.”

Designed by FACE and lighting designers Painting with Light, the storm pool is outfitted with 16 Renkus-Heinz CFX81 two-way compact loudspeaker systems, arrayed to create the illusion of a storm passing overhead. “The challenge was to create a genuine thunderstorm, moving over the storm pool and exploding above the 15x15m rain-shower zone before softly fading away,” explained Steven Kemland, FACE’s Project Division Manager. The system is driven by Powersoft amplification, processed by MediaMatrix NION and programmed by a TiMax 2 SoundHub. 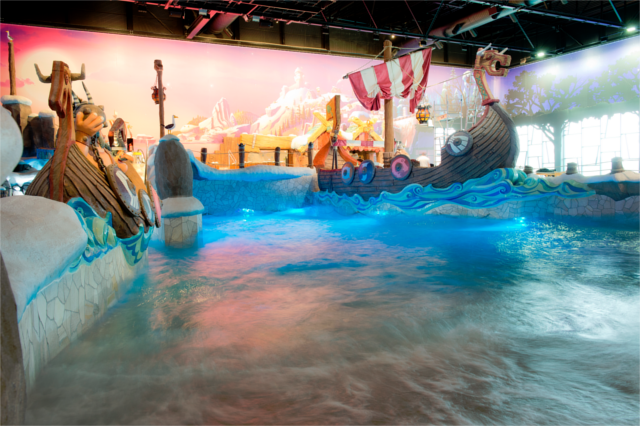 The CFX loudspeakers have been specially treated to resist the subtropical temperatures, high humidity and chlorine content in the enclosed environment, as have all rigging and peripheral components. “The speakers are covered with a special chemical finish, and so is every bolt and plug used in the rigging,” said Kemland.

Despite their compact profile, Kemland said that the CFX81 cabinets were the perfect choice for the project. “The CFX-81s are used to create the thunderstorm effect. Instead of steering the sound over individual speakers, the TiMax SoundHub uses the full configuration, creating a realistic surround effect of a tropical storm’s movement.” The system also serves as general PA system for safety or emergency messages.

Open only since March 2015, Plopsaqua has thus far exceeded all expectations, racking up more than 100,000 visitors in its first three months of operation. Steve van Camp concluded, “This project is the result of years of experience and a professional approach, making this thematic water park one of kind.”